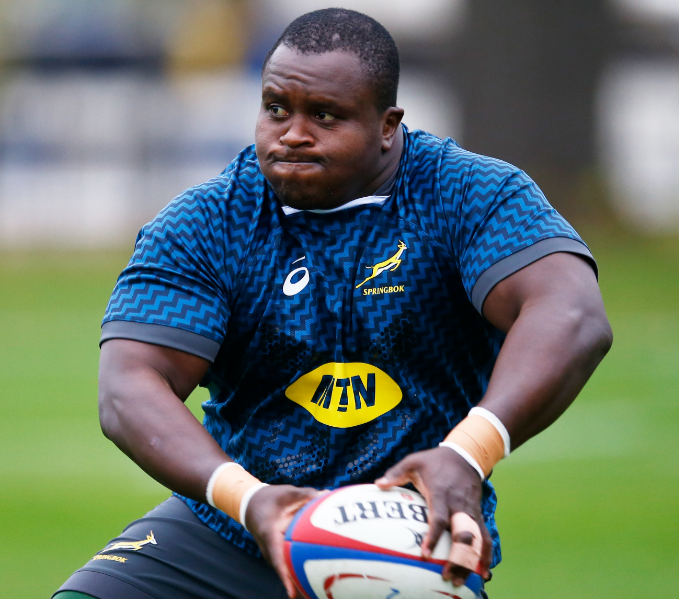 Bok talk turned bellicose in Bloemfontein ahead of the second Test against Wales on Saturday.

The Springboks scraped through 32-29 in an at times tetchy first Test and returning tighthead prop Trevor Nyakane made it clear his team will not stand for Welsh baiting two weeks in a row.

Nyakane urged his team to speak softly and carry a big stick as they go in search of a win that will secure series success.

“The only way we know how to do things is to be silent bullies,” said Nyakane. “That is exactly what we are going to do. We are going to inflict pain. We want to inflict our physicality on them. So if they are going to be talking or doing whatever, let them do whatever they do best and we will do what we know best.”

There was a lot of banter during the first Test and though Wales were able to knock the Boks off stride, it was the tourists’ willingness to stand up and contest the tight exchanges that made the clash such an arm wrestle.

If the atmosphere is a little febrile it may have a lot to do with whatever buttons Wales pushed to irritate the Boks last week, it hit the spot.

“Most teams try that against us,” said Nyakane. “You have to fight fire with fire, but you also have to be smart and avoid being sent off the field for saying something ridiculous or doing something not worthy of the Springbok colours. For us it is going to be tough because they will try their best to do that,” said Nyakane.

The versatile prop who was introduced to professional rugby during a seven-year stint in Bloemfontein, said visiting teams usually struggle in the Free State capital. He was a little surprised to discover the tourists opted to do their preparations in Johannesburg.

“It’s not easy for visiting teams,” he said of playing in Bloem. “After Pretoria and Johannesburg this is probably the hardest place to play because you breathe heavily. The air is dry. It feels like there is not a lot of oxygen. It is a bit tougher for teams to come here. When I was playing for the Cheetahs I always felt it was tougher for the other teams.

“From my experience it is a different ball game when you come down here. We know what it is like. That’s why we gave it the nickname “begrafplaas” (graveyard). It is a tough place to come and play.”

The Free State Stadium has certainly been an ally for the Boks in the 20 Tests they've played there. The home team has won 14 Tests, and two matches (New Zealand and Australia) were drawn.

The Springboks’ last clash there was in 2018, but Nyakane, who was in the squad, missed out because he broke a rib in the lead up to the first Test against England in Johannesburg.

Oddly though, Nyakane, who has racked up 54 Tests, has played in just one Test in Bloemfontein. This will only be the Boks’ third there since Nyakane made his debut in June 2013.

He will be keen to show off his newly acquired skills at his old stamping ground. The move to Racing Metro in Paris made Nyakane harden up quickly in the cut and thrust of the competitive Top14.

“France is a lot more challenging and very physical, week in and week out. It doesn’t matter whether you are playing the team at the top of the log or the team at the bottom. Any day you can take a hiding. The backs up there look like forwards. It is really scary. One thing I’ve learnt is to man up and fight your own battles,” said the prop.

That experience should stand him in good stead for whatever Wales throws at him on Saturday. Clearly he feels he is ready.