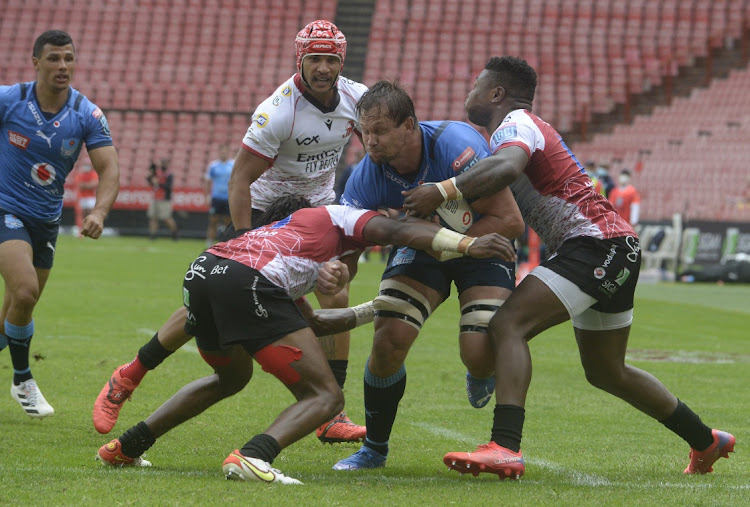 Arno Botha of the Bulls is tackled during the United Rugby Championship match against the Lions. Saturday's final in Cape Town may be his last for the Bulls. Picture: SYDNEY SESHIBEDI/GALLO IMAGES

Bulls flank Arno Botha does not want to hype Saturday’s United Rugby Championship (URC) final as his last for the franchise.

The broad-shouldered loose forward is loath to heap unnecessary pressure on himself before the “Clash of the Titans”, as he put it, against the Stormers in Cape Town on Saturday evening.

Besides, he may yet get to play in another final a week later. “It could be. It depends on the Currie Cup,” said Botha who is joining Lyon in France. “I'm not thinking of it like that. It is not my motivation. Maybe afterwards I can take it all in.

“For now it is about what we can do to be good this weekend. Sometimes when you think about it as your last game some hidden emotions may come to the fore. It is about helping the team as much as I can. I cannot place that emotion on myself.”

Botha will have reason to want to go out with a bang. He has been part of a Bulls group assembled by Jake White that has swept nearly all before them over the past two seasons.

They had to yield as the Stormers took URC Shield honours, but that could be dwarfed into insignificance if they win the big prize on Saturday.

Botha, who had to weigh his options before returning to SA, has no regrets that he did. “I’m definitely pleased at coming back. You can’t take these things for granted. We believed we were here for a purpose.

“I can’t think I would have had two better years elsewhere. Rugbywise, familywise or lifestylewise.”

To earn the right to play in the final the Bulls achieved the near impossible by beating Leinster in Dublin. The Irish blue bloods hardly lose at home, let alone a knockout game. While Botha reminded the Bulls that they had to dig deep there was a prescience about the win.

“It required a huge effort. There were things that happened in that week. The messages we got. Things that don’t happen every week to switch guys on. We knew what we wanted to do.”

Botha said, however, after the team’s review of the game that it was time to move on and focus wholly on the final. While winning in Dublin would have bolstered their confidence, the Stormers present an entirely different challenge.

The physical toll of last weekend’s semifinal would have affected the way they prepare for the showpiece on Saturday.

Botha said it was about giving the body time to recharge, and it was the mind that needed sharpening.

“In finals you might get something you didn’t get through the season. Maybe not skills-wise, but mentally definitely. It is easier on the body. It’s about boxing smarter. We are at ease.”