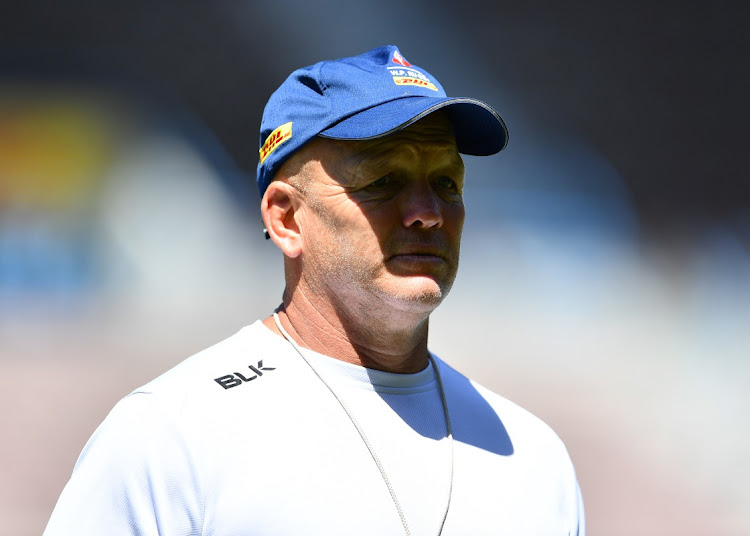 John Dobson turns to poetry and a Greek myth when he tries to put into words the journey his  Stormers team has been on to reach this historic first final of the United Rugby Championship (URC) against the Bulls in Cape Town on Saturday.

A season that started with his Western Province union in financial and political disarray, with his players uncertain about their salaries, the departure of some key stars in Siya Kolisi and Bongi Mbonambi, as well as the loss of their beloved Newlands Stadium and a move to the Cape Town Stadium, combined with pressure on even his own position, has now culminated in a shot at becoming the first champions of the URC.

But it is a far cry from what Dobson describes as a very dark beginning for this team.

“It was dark. Western Province was dying, no doubt about it. So I had in my mind the Dylan Thomas line from his poem ‘Do not go gentle into that good night — rage, rage against the dying of the light’. And then the Greek myth of Sisyphus pushing the boulder up the hill.

“He’s known as the absurd hero. He was without hope, and his joy became defying that absence of hope. As a team we were 88-1 odds at the start of this competition, and we told the players about the absurd hero that was Sisyphus, and they took it on and revelled in proving everybody wrong week in and week out,” says Dobson.

“It was a really tough time at the start of the season. I love Western Province rugby. I didn’t want to see it break down, but we were perilously close to what happened to the Southern Kings.

“And then you know, we’re about to play the Bulls in one of the rounds and only to be called away from a training session to a management meeting to explain why you should remain as coach — that’s not constructive.

“There were meetings every week between the management and players. It became like a kind of game to try to keep the big players. We knew if we could just keep Steven Kitshoff and Frans Malherbe, then we could secure Salmaan Moerat and Damian Willemse and others.

“It was literally done like that, to create a team that could compete. And that was all we thought we would do. We aimed for a top eight placing this season. Our aim was to try to win this competition in 2024 only.

“Then we went on tour and realised, hang on, there is something we can do here. I think some of the SA teams went on that first UK tour and came back with huge doubts, but we organically just grew as a team and came back a much tighter group.”

On the other side of the halfway line on Saturday will be a Bulls team that also knows well the feeling of being written off. Languishing in 15th place after the opening four rounds, Jake White’s men clawed their way back, and were then still given no hope against Leinster in the semifinal in Dublin. But they pulled off the seemingly impossible to set up their date with the Stormers in an all-SA final.

For both teams, a victory on Saturday will be a triumph of unity against adversity, and everything the URC aims to represent.

For Dobson, though, it will feel like nothing short of a miracle from where they started.

And you can bet both the Stormers and Bulls will not go gentle into this Saturday night in Cape Town.