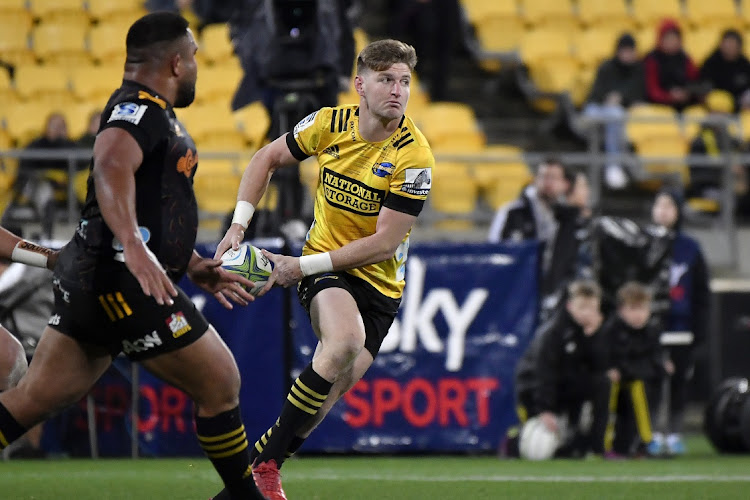 Jordie Barrett of the Hurricanes passes the ball during the round 9 Super Rugby Aotearoa match between the Hurricanes and the Chiefs at Sky Stadium on August 08, 2020 in Wellington, New Zealand. Picture: MASANORI UDAGAWA/GETTY IMAGES

Wellington — Hurricanes coach Jason Holland has not been in doubt all season, but after Super Rugby Aotearoa ended at the weekend he was certain that Jordie Barrett would be the starting fullback for the All Blacks under new coach Ian Foster.

Barrett missed the Hurricanes’ first two games of the domestic season with a shoulder injury that was bad enough that surgery was considered. The 23-year-old returned for the third match and pundits, coaches and teammates credited him for helping spark the side’s resurgence as they won their next five games.

“I think the No 15 jersey is pretty much sewn up as I see it,” Holland said on Monday when asked about Barrett’s form, continuing a theme all season when he described him “streets ahead” of other challengers for the position.

Foster, who succeeded Steve Hansen in 2019 after the past eight years as his assistant, is scheduled to name his first All Blacks squad later in August.

While Barrett made the All Blacks in 2017, some of his decision making, particularly under pressure, was criticised. In 2020, however, he has eliminated the more risky options while he sought to impose himself more and stepped up his defensive physicality.

His biggest challengers for the All Blacks’ fullback position are likely to come from older brother Beauden, who is normally a flyhalf but has mostly been playing fullback for the Blues; the Chiefs’ Damian McKenzie; and the Crusaders’ Will Jordan.

The uncapped Jordan made arguably the biggest move in Super Rugby Aotearoa, where he impressed at fullback and on the wing and was the top try scorer, made the most running metres, beat the most defenders and had the fourth most ball carries.

Both Jordan and the younger Barrett are likely to be named in the “South” squad on Tuesday for the North-South clash on August 29, which should be a pointer to Foster’s thinking for later in 2020.

Rugby Australia is hoping to bring teams from SA, New Zealand and South America, but the pandemic will be a determining factor
Sport
11 months ago

Currie Cup likely to regain some of its lost popularity