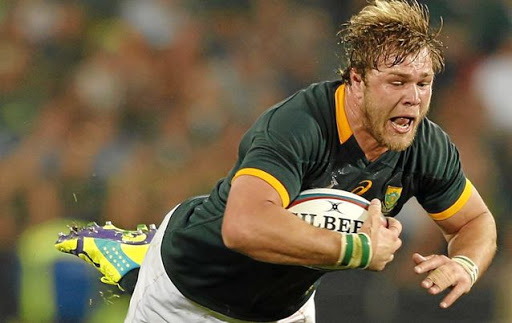 Duane Vermeulen will take over as captain of the Bulls after the Pretoria side announced his appointment on Tuesday.

The highly experienced Springboks No 8 will assume ownership of the armband after Burger Odendaal’s recent move to Johannesburg to join the Lions.

The 34-year-old World Cup-wining Vermeulen‚ who said recently he was the target of a blackmail plot by hackers‚ will be assisted by flank Arno Botha and wing Gio Aplon as deputies.

Vermeulen is no stranger to leadership roles as he captained the Springboks against New Zealand in Wellington in 2019 and also wore the Stormers armband during the 2015 season.

“It is always a privilege to play a game of rugby, and it is one I never take for granted‚” said Vermeulen. “It’s a massive honour to be appointed captain of this group‚ especially at this exciting time when so much is expected from us. A huge thank you must go to Jake [White] and the management team for trusting me with this immense privilege.

“This year has been a difficult one for many South Africans, but rugby will return and when it does the Bulls will be ready to make you proud.”

Vermeulen’s vast experience in southern and northern hemisphere rugby helped persuade White to award Vermeulen the armband. The appointments of Botha and Aplon as deputies were  based on similar considerations.

The 28-year-old Botha has always been earmarked to have a hand in the Bulls’ leadership structures since his junior days at Loftus and he has led the Blue Bulls at various levels‚ including the Currie Cup.

The 37-year-old, hot-stepping Aplon brings a wealth of experience to the side that includes spells with the Stormers‚ Grenoble in France and Toyota Verblitz in Japan. His 17 Springbok caps do not hurt either.

There will be healthy supply of leaders on the field as the Bulls have already experienced campaigners such as Trevor Nyakane‚ Morné Steyn‚ Nizaam Carr and Ivan van Zyl.

Playing at the Tokyo Olympics would be a big ask of the schoolboy prodigy, says Tim Walsh
Sport
8 months ago
Next Article