After delivering his best performance last week, the former Blitzboks speedster is ready to do even more for his team 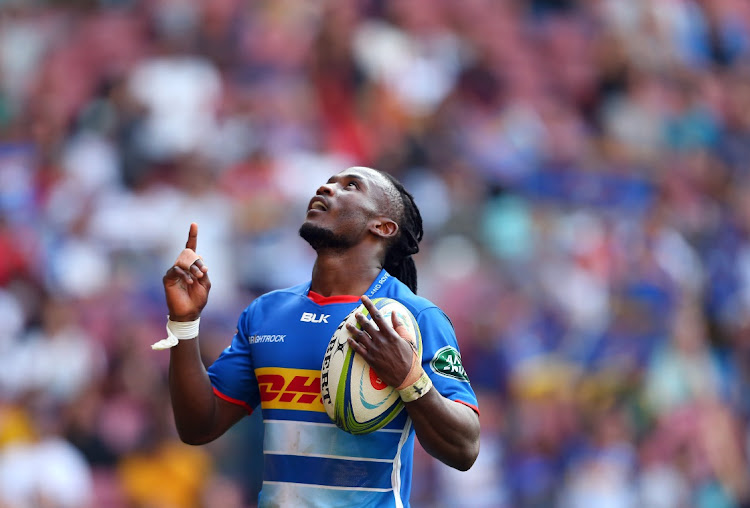 Seabelo Senatla of the Stormers during the a Super Rugby match. Picture: CARL FOURIE/GALLO IMAGES

Cape Town — The Stormers’ late surge to a Super Rugby playoff place has been the result of much improved cohesion as a team mainly due to the excellent form of several leading players.

And one of the players who is suddenly fulfilling his immense promise is wing Seabelo Senatla.

The former Blitzboks’ main strike weapon has not fully made a successful transition to the longer version of the game‚ mostly because he has had relatively little game time.

Injuries have plagued Senatla’s transition while he has not always been able to force his way into the match-day squad, particularly at Super Rugby level.

Earlier this season Senatla‚ although fully fit for the first time in a year‚ was asked to work on his aerial skills and defence. He was initially out of the frame‚ but injuries to Sergeal Petersen and SP Marais created a gap for the speedster‚ and he has needed no second invitation to surge through it.

Senatla has been in superb form in recent weeks‚ culminating in his most accomplished performance at Super Rugby level during last week’s 34-22 win over the Highlanders at Newlands.

Coach Robbie Fleck praised Senatla’s work rate‚ ability under the high ball and defence, all aspects of his game he had been honing for months.

The coach called it Senatla’s best game and said it was because he finally had a run of matches‚ which has allowed him to settle in.

“I’ve been fighting for game time for a while‚” Senatla said. “Fleckie communicated to me very early in the season that it wouldn’t be easy for me to get a run in the team.

“He said I was unlikely to get a chunk of time in the team‚ and that my chances would come in snippets.

“That’s what happened initially. I got five minutes here‚ seven minutes there. It was frustrating but I kept reminding myself that Fleckie said it would be a process.

“I needed to stay faithful in my work and I needed to be ready. It was unfortunate for Sergeal to be injured but it gave me my chance. That’s how the game of rugby goes.”

Senatla admitted he had heard the chatter that last week was his best game in Stormers jersey but he was happier knowing his work behind the scenes was starting to translate to performances on the field.

“Apparently people are saying last week was my best game‚ but I’m just glad that my focus on the smaller things is paying off‚” Senatla said. “I think I got all the high balls and did well in defence. It’s not that my defence is bad‚ but I had a good all round game.”

Stormers to face Jaguares without trio of Springboks

Time for talking is over for Blitzboks

Stormers to face Jaguares without trio of Springboks

Time for talking is over for Blitzboks