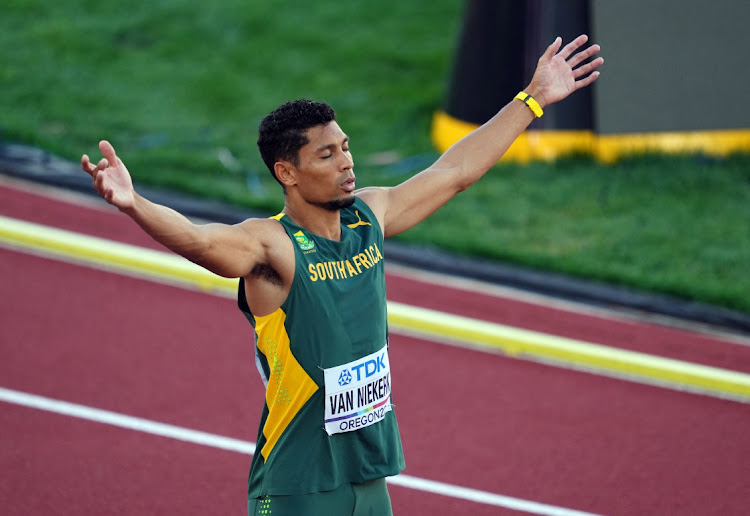 Wayde van Niekerk qualified for his first major final in five years as he finished second in his 400m semifinal heat at the world championships in Eugene, Oregon, on Wednesday (Thursday morning SA time).

The world record-holder went out fast but found himself in a tight battle at the end of the lap. To his credit, Van Niekerk had the strength to out-duel Jonathan Jones of Barbados on his inside, but American champion Allison, who had trailed the South African by a couple of metres turning into the home straight, passed him on the outside to win in 44.71sec.

Van Niekerk, who was eliminated at the semifinal stage at the Tokyo Olympics in 2021, crossed the line in 44.75 to book his spot in the final, just ahead of Jones, whose 44.78 was quick enough to see him advancing as one of the two fastest losers.

The first two from each of the three semifinals qualified automatically for Friday’s final (Saturday morning SA time), accompanied by the next two fastest.

Overall, Van Niekerk’s effort was the fifth quickest of the three semifinals, with American Michael Norman pushing hard as he set the pace in 44.30 to edge Briton Matthew Hudson-Smith in 44.38.

Van Niekerk injured his right knee in 2017 and is still trying to recapture the form when he set the 43.03 world record six years ago. The fastest time of his comeback was a 44.56 last year, while this year he registered 44.58 two weeks before the championships.

Van Niekerk, who turned 30 last Friday, will go into the final as an underdog, and though he will need to find more speed to make the podium in Eugene, no-one is likely to write him off.

He and his rivals will be looking to capitalise on a field that is missing the two reigning 400m competitors, Olympic and world championship gold and silver medallists Steve Gardiner of Bahamas and Colombian Anthony Zambrano.

Van Niekerk will take heart from possessing the strength to hold off Jones, and that he progressed when there were some high-profile casualties, including American Michael Cherry and veteran Isaac Makwala of Botswana, both finalists in Tokyo.

Van Niekerk’s compatriot Zakhiti Nene ran well in the first semifinal to finish fourth in 45.24, behind Jamaican Christopher Taylor, the other fastest loser in 44.97. Van Niekerk is SA’s third finalist so far at this meet, after Akani Simbine in the 100m and Luxolo Adams, who competes in the 200m final on Thursday (Friday morning SA time).

It is the first time three South Africans have made the finals of the three sprint races at a major competition, and it could bode well for the 4x100m relay. It also ensures SA will, at the very worst, match its worst world championship performance of three top-eight finishers, with no silverware, on four occasions, in 1993, 1995, 2005 and 2007.

In other action, Zeney van der Walt ran a 54.81 personal best in her 400m hurdles semifinal, but that was still more than a second off what was needed to make the final. The world under-20 champion in 2018, she ended fourth in her heat, won by defending champion Dalilah Muhammad of the US in a 53.28 season’s best.

Holland’s Femke Bol, who spends time training in Potchefstroom, won the second semifinal in 52.84 while US Olympic champion Sydney McLaughlin took the third race in 52.17.

Three-time world 800m champion Caster Semenya finished 13th in her 5,000m heat in 15min 46.12sec, more than 10sec outside her own best time, while the top four qualifiers, including Olympic champion Sifan Hassan of the Netherlands, cantered around the track in 14:52.

Tshepo Tshite crossed the line in a disappointing 1:47.61 as he ended sixth in his 800m heat. The slowest of the fastest losers clocked 1:45.94.

Jo-Ane van Dyk managed a best throw of 57.79m as she failed to advance beyond the qualifying round of the women’s javelin.