Strydom back in saddle as he prepares for Durban July bid 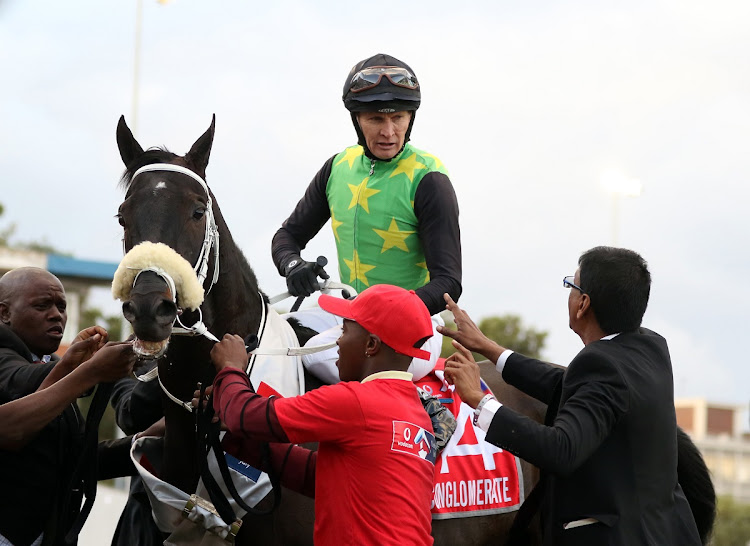 After 14 months, former champion Piere Strydom will be back in the saddle at Greyville on Sunday as he takes an important step in getting “match fit” for his ride on Belgarion in the Hollywoodbets Durban July.

Strydom has had to get clearance from an ophthalmologist to resume riding, but he has cleared that hurdle and will partner Nexus for trainer Justin Snaith in Sunday’s KZN Breeders Mile.

“It is all looking good — I jumped out of the stalls for three gallops to get used to pushing a horse out again, but there is nothing like riding in a race,” Strydom told Turftalk.

Considering there’s a first prize of R375,000, the field for the Breeders Mile doesn’t set the pulses racing, but Nexus has a shout now that he’s come down in the ratings. However, he only beat one rival home in a race at Kenilworth earlier this month and there’s unlikely to be a stampede to back the six-year-old at his opening price of 5-2.

Two runners who make more appeal are Willow Express from Sean Tarry’s stable and Bold Act with Richard Fourie booked to partner the Summerhill-bred daughter of Act Of War.

Warren Kennedy reunites with Willow Express who he partnered into third place behind Al Muthana in the Wolf Power Stakes at Turffontein in January. The owners of this Stone Hill Stud son of Willow Magic could have a big payday considering the grey cost only R90,000 as a yearling.

Battle Force could notch his eighth win as there were excuses for his unplaced run in the Golden Horse Sprint in which he was reported to have cast both fore shoes.

The sixth race — another KZN Breeders event — looks a trappy affair though Muzi Yeni’s mount, Prince Of Taranto, should go well with just 52kg on his back. Another plus is that the Clifton Stud-bred gelding is drawn in pole position.

Spydas Corner disappointed in his latest outing, but he’s a five-time winner so has to be on the shortlist of possible winners. Chattertons Keeper raced wide under his young rider last time out and may do better with S’mango Khumalo in the irons.

In the final leg of the Pick Six, Peter Muscutt’s mare, Wishful Girl Linn, is the early favourite with the five-year-old bidding to notch the seventh win of her career.

Admire Me will have her supporters though it’s a worry she hasn’t raced since March, while Capetown Beauty could get in a blow as she drops in class after contesting the Woolavington 2000.

There’s an excellent card at Kenilworth on Saturday and Gem King — winner of four of his past five starts — will be a warm order to take the winner’s cheque in the grade 3 Pocket Power Stakes.

If bookies have got their sums right, the danger to Piet Steyn’s runner is Winchester Mansion who was beaten three parts of a length by Gem King last month and the two three-year-olds meet on the same terms.

Brett Crawford trains Winchester Mansion and his filly, Fleeting, may appreciate stepping up to 2,400m in the WSB River Jetez Stakes. However, her pedigree doesn’t necessarily back up this view as her dam, Frequent Flyer, only won up to 1,700m.

Grant van Niekerk’s mount, Young Love, is the early favourite and should be in the mix along with Peut Etre Moi.

Brewer hopes to celebrate birthday with double at Vaal

One of the finds of the season, the 19-year-old is in 16th place in the jockey log
Sport
1 week ago

Wins on Pocket Power and Marinaresco are proof that jockey knows his way home in the 2,200m race
Sport
1 week ago

Highveld trainer pays R300,000 for a daughter of Gimmethegreenlight
Sport
1 week ago
Next Article