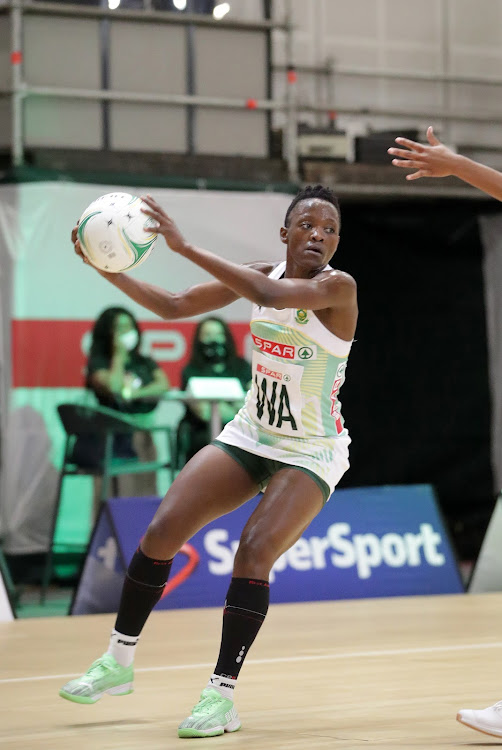 She may be at the peak of her netball career, but as Bongi Msomi leads the Proteas into this year’s Commonwealth Games she remains as grounded as before.

And it would seem that is the way she has lived most of her 34 years on Earth from a humble background on the dusty streets of Hammarsdale, KwaZulu-Natal, to gracing the world’s star-studded courts.

The event in Birmingham, England, will be her third Commonwealth Games but already she’s looking beyond the ballgame. “Apart from captaining SA I’m also a netball manager and coach at the University of Johannesburg [UJ] and have my own Bongi Msomi Legacy Project running, which I want to attend to even more after my own international career,” says Msomi.

“I’m so passionate about being able to help people grow during and after sport. Being at UJ has helped me manage people and see their needs, so I’m very focused on creating student/athletes rather than purely athletes, so that they have balanced lives.”

She speaks from experience, which she puts into practical use wherever she can. “I loved life in Hammarsdale. It’s simply that I was never exposed to anything else, except what I saw in front of me.”

She did not see hardship as a challenge, but rather as an avenue to soar. “I’d go to training camp and realise I was maybe a bit behind in some areas, so I’d go home and because we didn’t have weights at home, I’d look at inventive ways of using my own body weight.

“It’s important to realise that it doesn’t matter where you come from, just accept the person you are, identify what you lack and work towards that.”

They were lovely but I remember thinking that my broken old shoes were still doing the job for me and I almost didn’t want to accept them.

A case of putting one’s best foot forward, perhaps? “I remember netball shoes being so expensive and constantly having to cover up the holes with tape. But I didn’t see anything negative about it, I actually loved those shoes and felt comfortable in them.

“One of my fellow players’ mom even bought me a new pair of shoes just before the 2009 World Youth Netball Champs in Singapore. They were lovely but I remember thinking that my broken old shoes were still doing the job for me and I almost didn’t want to accept them.

“So that was a classic example — just to keep on striving, doing the best you can, and people will see you, they’ll take note. Don’t worry about challenges, everyone has them.”

And that extends to mental health, a subject increasingly acknowledged at the highest levels of sport. “We’re always being judged, in sporting life and life in general but I learnt early on that anything can happen at any time — just deal with it positively and work hard not to lose what you already have. It’s great to see people dealing with it openly.”

Msomi is positive over the SA team’s chances in Birmingham. “We’re definitely in a position to be on that podium … the 2014 and 2018 Games have taught us a lot. Previously we’ve been our own enemies in not starting off well at tournaments. We learnt so much from previous Comm Games to now. A different mindset, and growth, are evident. Credit to our team management.

“Now every game has to be approached with the same mindset — no ‘easy games’, no games ‘we can’t win’.”

Having been there, done that, she has valuable advice for the Games newbies in the squad. “It’s really the simple things, like being wary of the 24-hour dining options. It’s so easy to lose discipline in the dining room and end up eating so much you can’t perform.

“My advice is to keep on doing the things like you’ve done in the preparation for the Games. Stay focused. With too many top athletes and people around, one can easily lose focus….

“It’s such an exciting experience, but just remember you’re there to do a job, playing for your team and for your country.”

It’s clear that Msomi’s work ethic is noted, and noted where it counts. Says national coach Dorette Badenhorst, “Bongi’s a player that always likes to analyse. Even at training we need to video so she can analyse afterwards. She leads by example, always wants to be fittest and out there, leading by example.

“She’s also so disciplined — even training at 11pm if that’s the only time she can. Having her as a captain is amazing. It’s never about her, always about the team.”

That attitude extends beyond the sport. “Off-court she’s just a great person, very easy to chat to and always a person who enjoys life no matter what.”

Msomi is well qualified to comment on the best ’ballers worldwide and her answers are certain. “Of SA players, Karla Pretorius, without doubt. She’s phenomenal, with her own style of play, and a unique style that I constantly wonder at. She’s also a great vice-captain by my side. I love working with her.

“Internationally, ex-New Zealand Silver Fern’s Temepara George, even though I never played against her. She’s short but she was so nippy and quick — maybe I’m biased as I’m also short,” she says. She loved her style of play.

Msomi’s talent has taken her around the globe, but for the Hammarsdale homegirl her favourite destination is a no-brainer. “The only reason I’ve visited every country I’ve been to has been to play netball; I’m not big on sightseeing. I’ll see a few things, but my main focus is on netball.

“And I miss SA within days. My memories of England are of the cold [laughs] … and definitely the lovely people I’ve met and my host family. I’ve never been in a country so cold. Coming from Durban, that was very hard. Australia at least had the same sort of weather.

And with that Msomi heads off to focus on making her country proud.