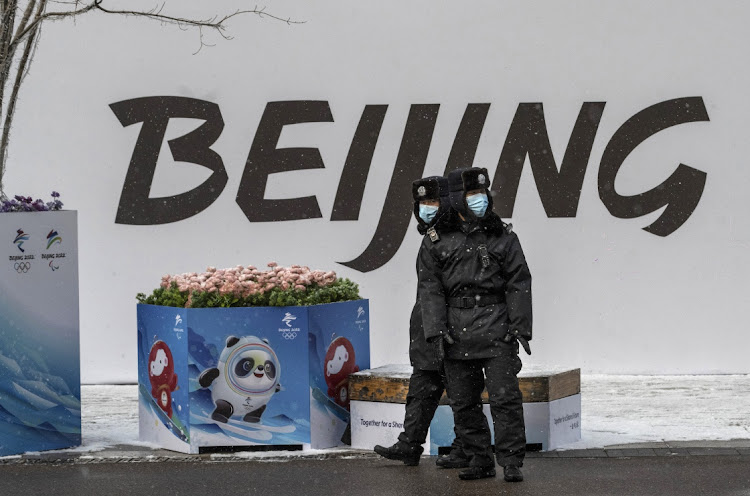 Security guards walk past a billboard for the Beijing 2022 Winter Olympics and Paralympics on January 20 2022 in Beijing, China. Picture: GETTY IMAGES/KEVIN FRAYER

Beijing — The Beijing Winter Olympics torch relay will be cordoned off from the public because of concern about the spread of the coronavirus, organisers said on Friday.

The relay involving 1,200 torchbearers will begin on February 2 and wind up just two days later, on February 4, when the Games open in the capital, Beijing, and neighbouring Hebei province.

“This torch relay will always prioritise safety,” Yang Haibin, an official from the Beijing Municipal Bureau of Sports told a briefing.

“Taking into account factors such as epidemic prevention ... the torch relay and ceremonial activities will be arranged in safe and controllable closed venues.”

Beijing, the first city to host both the Summer and Winter Games, is on high alert for the coronavirus after a handful of small outbreaks in various parts of the country that authorities have responded to with sweeping restrictions and mass testing.

All of the torchbearers must be vaccinated and will be tested for the virus and have their health monitored for 14 days before the relay.

The relay route, which will be much shorter than previous ones, will include a stop at the Great Wall, China’s most famous landmark, as well as central Beijing’s Olympic parks, the Summer Palace and other venues including International Grape Exhibition Garden and Zhangjiakou Industrial Culture Park.

Only selected members of the public will be allowed to watch the relay in person.

Ahead of last summer’s Tokyo Olympics, the torch travelled more than 2,000km in 121 days but was moved off public roads due to the Covid-19 outbreak. The relay ahead of the 2018 Pyeongchang Winter Olympics covered 2,018km.

The flame for Beijing’s Winter Games was lit in Greece in an October ceremony that was disrupted by human rights activists.

Beijing and the Hebei city of Zhangjiakou will stage the Games from February 4 to February 20 inside a “closed loop” to keep participants apart from the public, and without spectators from the public.

Preparations for the Games have been disrupted by Covid-19 as well as a diplomatic boycott by countries including the US over China’s human rights record. China says that betrays Olympic principles and denies rights abuses.

All 27,000-odd stakeholders in the Games will be sealed inside a ‘closed loop’ for the upcoming event
World
4 months ago
Next Article