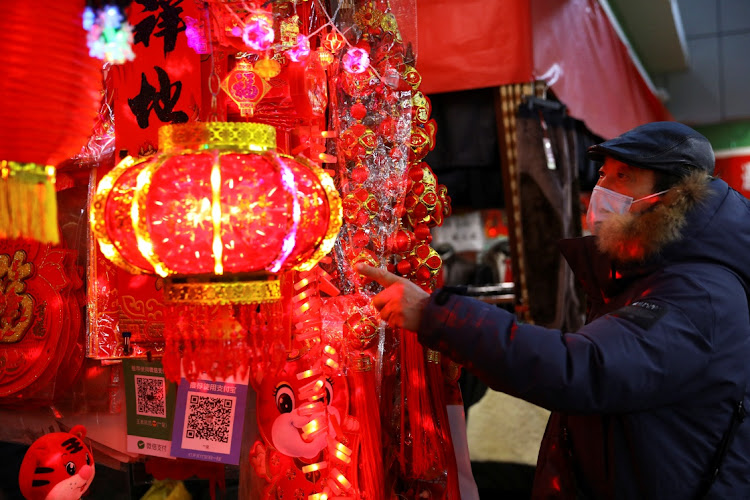 A customer looks at decorations for Chinese Lunar New Year displayed at a stall inside a morning market in Beijing on January 14 2022. Picture: REUTERS/TINGSHU WANG

Authorities have warned the highly contagious Omicron adds to the increased risk of Covid-19 transmission as hundreds of millions of people travel around China for the Lunar New Year on February 1.

Cities such as Luoyang in central China and Jieyang in the south said on Sunday travellers need to report to communities, employers or hotels their trips three days ahead of arrival.

The southwestern city of Yulin said on Saturday those who want to enter should fill in an online form, including their health credentials and trip details, one day in advance.

At the weekend, the capital Beijing and the southern technology hub Shenzhen each detected one domestically transmitted Omicron case.

The possibility that the Omicron case in Beijing was infected through imported goods can't be ruled out, Pang Xinghuo, an official at the city's disease control authority, said on Monday.

Li Ang, vice-director of the Beijing Municipal Health Commission, said a local hospital has admitted nine Omicron infections, with six still being treated. He did not say when the infections arrived or why they hadn't been disclosed earlier.

The city of Meizhou in Guangdong province found one Omicron infection linked to an outbreak in Zhuhai, state television said on Monday.

So far, at least five provinces and municipalities reported local Omicron infections, while 14 provincial areas found the variant among travellers arriving from overseas.

China is yet to show any solid sign of shifting its guideline of quickly containing any local infections, despite a high vaccination rate of 86.6%. The strategy has taken on extra urgency in the run-up to the Winter Olympics, to be staged in Beijing and neighbouring Hebei province starting February 4.

Many local governments have already advised residents not to leave town unnecessarily on trips during the holiday, while dozens of international and domestic flights have been suspended.

China's aviation regulator said on Monday it will suspend two flights from the US over Covid-19 cases, bringing the total number of cancelled flights this year from the country, where Omicron is spreading, to 76.

China reported 163 locally transmitted infections with confirmed symptom for Sunday, official data showed on Monday, up from 65 a day earlier.

Sunday's increase in infections was mainly driven by more cases in the cities of Tianjin and Anyang, where Omicron has been found in local clusters.

Tianjin and Anyang reported slightly more than 600 local symptomatic infections from the current outbreaks, smaller than many clusters overseas, but authorities there still have limited movement within the cities and trips to outside.

City is becoming increasingly shut off from the outside world amid a raft of flight bans and tough quarantine restrictions.
News
5 months ago

Chinese vaccine maker’s sales in the first half of 2021 rocketed, but it warns future revenue could slip amid competition from other Covid-19 shots.
News
5 months ago
Next Article