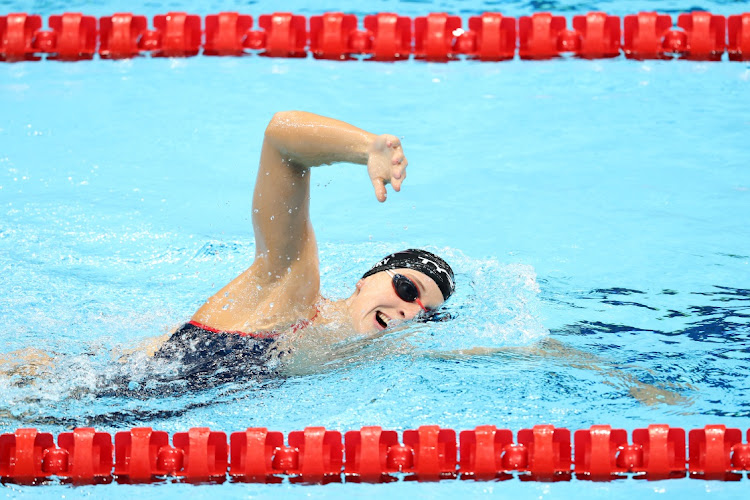 Katie Ledecky of Team United States during aquatics training at the Tokyo Aquatics Centre ahead of the Tokyo 2020 Olympic Games on July 22 2021. Picture: GETTY IMAGES/TOM PENNINGTON

Tokyo — Five-time Olympic champion Katie Ledecky is focused and improving fast in the run-up to the Tokyo Games, her coach said on Thursday, as she embarks on a gruelling quest for five gold medals to cement her place in swimming history.

Ledecky comes in as the favourite in two of her four individual events in Tokyo but must outshine in-form Australian Ariarne Titmus in three of those to deliver on a clean sweep.

“I’m excited for her to be here in this moment she loves the Olympic Games,” coach Greg Meehan told reporters. “It’s been a big stage for her obviously, over the past nine years. And, you know, as we roll into 400 freestyle prelims, she’s going to begin her process of just attacking each of those events, so she’s in a great place right now.”

Meehan, the US women’s team coach, said Ledecky had shown resilience through disruption caused by the coronavirus pandemic and a lack of top-tier competition, rising to the occasion at the recent US Olympic trials.

“Katie is a really consistent, really hard worker and when you go through such a long period without resting without elite level competition, sometimes it takes a little while ... just in that environment for her to still stay really focused on her task at hand, which was to make the team,” he said.

“Day by day, week by week she has continued to get better and better.”