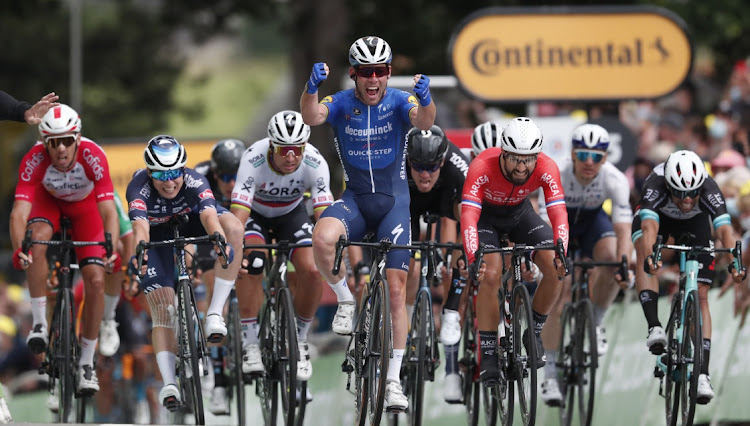 Fougeres - A last-gasp addition to his team, Mark Cavendish rolled back the years as he claimed his 31st Tour de France stage victory on Tuesday — five years after his last success in the world’s greatest cycling race.

The Briton, who finished outside the time limit in his previous participation in 2018, crashed out in 2017 and hinted at retirement last year. He is now three victories away from the Tour’s all-time stage win record held by Belgian great Eddy Merckx.

Cavendish, back in the Deceuninck-Quick Step team this season after a five-year hiatus, powered past his rivals in the final straight to beat France’s Nacer Bouhanni to the line. Belgian Jasper Philipsen took third place while his Alpecin-Fenix teammate Mathieu van der Poel retained the overall leader’s yellow jersey.

“I don’t know what to say,” said a tearful Cavendish, who was a last-minute stand-in on the team for Irishman Sam Bennett. “Just being here is special enough. I didn’t know I would get to come back to this race. I thought I was never coming back [on the Tour] honestly but the stars have aligned somehow. After last year it’s just nice to have some good luck.

“We didn’t know we were going to get there but we just see what a team this is. So many people didn’t believe in me but these guys do.”

The day had begun with a rider protest — with all teams putting their collective foot down 1km into the 150.4km fourth stage from Redon to bring the race to a halt for about a minute in a silent protest for safer racing conditions after numerous crashes in the opening stages.

They then rode the next 10km at a snail’s pace. As the stage came to a conclusion, breakaway rider Brent van Moer was close to upsetting the sprinters. But he was caught by the charging peloton 150m from the line, with Cavendish producing a perfectly timed effort to snatch his 49th stage win on a Grand Tour in the town where he also prevailed in 2015.

Wednesday’s fifth stage is a 27.2km individual time trial from Change to Laval, and all eyes will be on the overall contenders. World champion Julian Alaphilippe, who has an eye on a potential podium finish in Paris after finishing fifth overall in 2019, is second, 8 sec behind Van der Poel.

He will be hoping his last-kilometre effort to get Cavendish up into a good sprinting position will not cost him. Colombian Richard Carapaz is third, 31 sec off the pace with defending champion Tadej Pogacar a further 8 sec behind.