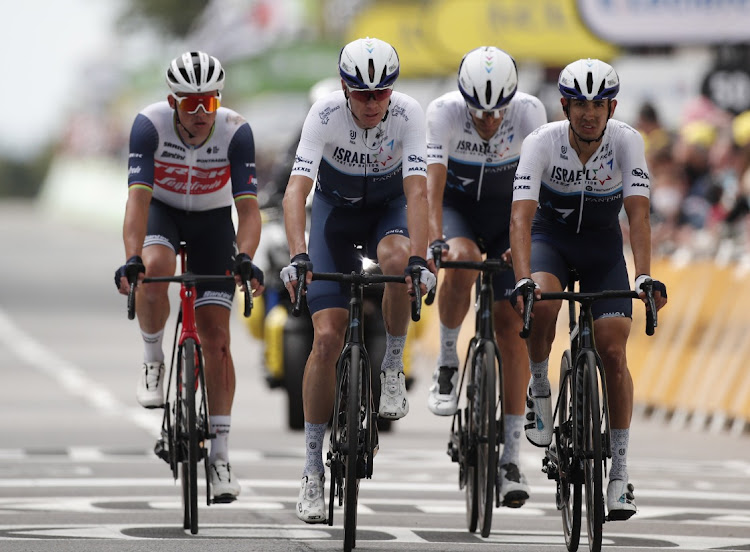 Perros-Guirec — Chris Froome took a high-speed tumble on the opening day of the Tour de France, but the four-times champion was on his bike for Sunday’s second stage determined to soldier on as he returns to the race after a two-year absence after a horror crash in 2019.

The Briton, who was not expected to be in the mix for a decent general classification placing, was sent crashing amid a huge pile-up with 7.5km left in Saturday’s ride between Brest and Landerneau.

Froome was back on his bike after being attended to by a race doctor and his Israel-Start Up Nation team sports manager Rik Verbrugghe, before crossing the line 14:37 down on stage winner Julian Alaphilippe of France.

The 36-year-old Froome, who won his Tour titles in 2013, 2015, 2016 and 2017, spent hours at a local hospital for a check that showed he had no broken bones. That was enough for a battered and bruised Froome to take the start of the second stage in Perros-Guirec.

“It looks better today. Yesterday I was really worried, he came back late from the hospital but I have a much better feeling this morning. He will need a few days to recover but let’s hope that on the bike everything is OK,” Verbrugghe told reporters.

Verbrugghe was in the middle of the chaos on Saturday when bikes and riders were sent flying after riders touched wheels while the peloton was charging down a slightly downhill section at over 70km/h.

“First of all, you need to do it step by step. He asked me to get back in the bike. He needed to stand up first and that as the most difficult because he had a big bruise in the back side of his leg,” said Verbrugghe. “That’s not the best way to start the Tour.”

Froome is on a lengthy rehabilitation path after he broke his femur, elbow and ribs after crashing into a wall at 60km/h while warming up for a time trial at the Criterium du Dauphine in June, 2019.

It became evident this season that he would not be able to be fully competitive for the world’s biggest race, but Froome is serving as road captain for Israel-Start Up Nation and leader Michael Woods, who lost all hope of featuring well in the general classification after losing considerable time amid two huge pile-ups on Saturday.

Froome, however, is a tough nut, said Verbrugghe.

“Mentally he is fine. The most important is that he’s on the bike and that he can continue to race. Because he was so excited to be at the Tour de France that if you need to leave after stage one that would be a hard mental blow,” the Belgian said, adding that Froome was expected to improve throughout the Tour and possibly take part in the Vuelta (Tour of Spain).

“That’s the big idea behind. He’s not 100% ready for the Tour but he will improve throughout the race.”

Froome has been mocked on social media for believing he could still win the Tour again one day.

“It’s a long rehabilitation. Some people shoot him, others have a lot of respect for him and I’m one of them,” Verbrugghe said.

“Will he be competitive on the tour again? Yes. It will take time for sure. If the best level from Chris Froome ever is enough to compete with those young riders on the Tour is a big question mark, but he will come back on a much better level.”