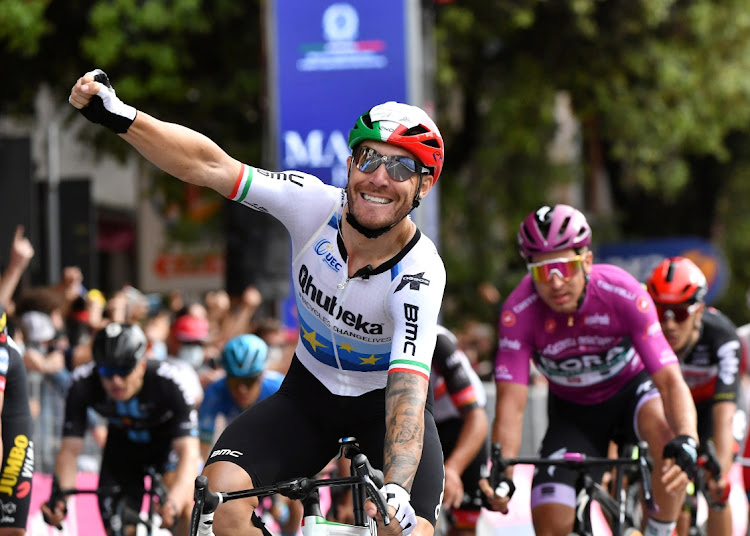 Doug Ryder, the principal of Team Qhubeka Assos, was reported to have lost his voice the night after his sprinter, Giacomo Nizzolo, achieved his first Grand Tour stage win at the Giro d’Italia on Friday. It would make two incredible firsts in the cycling world.

Ryder’s voice rarely goes missing. It has been strident during his journey of taking a team from SA’s roads to those of Europe, from the Cape Town Cycle Tour to the biggest races in cycling.

Like Nizzolo, the Italian and European champion, he has never given up, particularly at the end of 2020 when his team was a trip and a wish away from having to close.

“What an incredible stage of the Giro d’Italia,” said Ryder at the weekend. “Lucky 13 for Giacomo. After 11 second places and dozens of top threes and top fives in Grand Tour stages he finally wins his first Grand Tour stage at the age of 32. Never give up. Never say never.

“It is absolutely incredible for him and for Team Qhubeka Assos. We came into this race with a plan to try to win a stage for Giacomo. There weren’t that many opportunities and he’s been second twice. Now he finally wins and two days after Mauro Schmid had an opportunistic win for us [on stage 11].

“It’s been a great Giro, the best we have ever had. Two second places and two first places in 13 days.”

With his debut Grand Tour win under his belt and a gruelling day on the climb to Zoncolan on stage 14 on Saturday, Nizzolo announced in a team statement on Sunday that he is leaving the Giro to “rest and recover and ... with the team focus on his upcoming goals”.

Those goals were “to be confirmed”, said Jean Smyth, the team spokesperson, but it is not a huge leap to suggest that he will be part of the team for the Tour de France. He is already on the “long list”, said Smyth, with decisions to be made after the Criterium du Dauphine, the traditional Tour de France warm-up stage race, and Tour de Suisse.

The wins by Nizzolo and Schmid have “given the team a lot of confidence; the riders that are preparing in Andorra for the Tour de France, and it has lifted the whole team and showed that we are doing the right things and, yeah, let’s carry on doing that”, said Ryder.

“We have had amazing fan engagement and support from all around the world and, in particular, SA. Long may this season carry on.”

Nizzolo has unfinished business with the Tour, having been forced to abandon on stage eight in 2020 in the mountains between Cazeres and Loudenvielle after struggling with a knee injury. He had taken third place on the third stage and was arguably in some of the best form of his career.

He took fifth in the Milan-Sarema before winning the Italian national and European championships on consecutive weekends.

“Everybody knows how much I love this race [the Giro] and what it means to me,” said Nizzolo.

“To finally win a stage here has been a dream come true, and the raw emotion at the finish line in Verona showed that. I will treasure that memory for the rest of my life.

“I came into the race in good condition, with fast legs and focus on the flat sprints, but have been struggling on the climbs that have really taken its toll. So we decided it would be best for me to stop and to recover, to look forward to the future.

“For our team this has been an incredible Giro d’Italia so far. We speak about the spirit of ubuntu within our squad — ‘I am because we are’ — and I think it’s evident for everyone to see in the way we are racing just how tight we are as a group and organisation.

“My win in Verona wasn’t just a victory for me and those behind the scenes but as importantly it continued to showcase our team’s purpose in riding for something more, for the impact that bicycles can have in changing lives which we are doing every day with the Qhubeka charity,” said Nizzolo.

The Colombian would normally be the hot favourite, but his performance will depend on how his back responds to the Giro’s punishing climbs
Sport
1 month ago