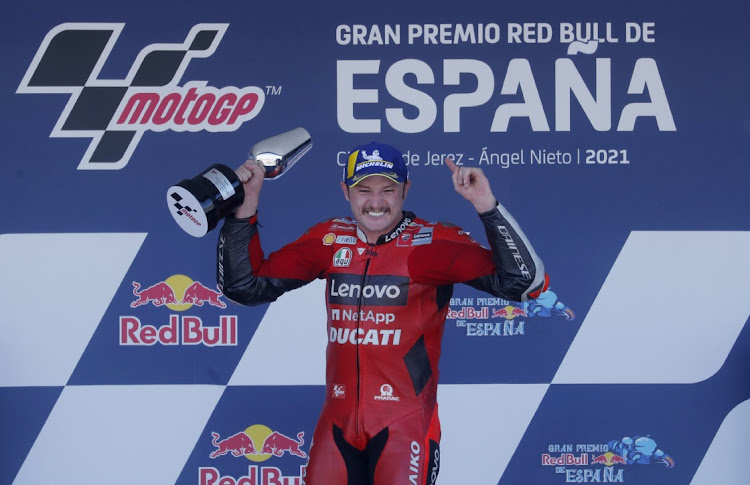 Jack Miller celebrates on the podium with the trophy after winning the Spanish MotoGP at Circuito de Jerez, Jerez, Spain, May 2 2021. Picture: REUTERS/JON NAZCA

Australia’s Miller used his Ducati’s power to pip Fabio Quartararo off the start line, with the Frenchman slipping to fourth behind Petronas Yamaha SRT’s Franco Morbidelli and Bagnaia on the opening lap.

Quartararo, who won both the races in Jerez last season, recovered over the next two laps to regain the lead and began to stretch his advantage to up to 2 sec at the top. However, the Yamaha rider was struck with a bike issue that saw his pace drop, allowing Miller to regain the lead with less than 10 laps remaining.

As Miller continued to build his advantage to over 1.5 sec, Quartararo plummeted down the order as he was overhauled by his championship rivals.

Miller held off Bagnaia to take the chequered flag for the first time since winning the 2016 Dutch Grand Prix, while Morbidelli rounded out the podium.

“It’s just undescribable what I’m feeling right now,” said an emotional Miller. “I had done a lot of laps by myself this weekend and I knew I had reasonable pace.

“After Fabio took the lead, I didn’t expect him to come back to me but he did. When I got past him, I just kept my head down and got as much as I could out of the last seven [or] eight laps — which felt like the longest I’ve ever had in my career.”

Bagnaia now leads the world championship with 66 points, two clear of Quartararo, who finished in 13th place. The championship will resume in two weeks’ time at the French Grand Prix in Le Mans.