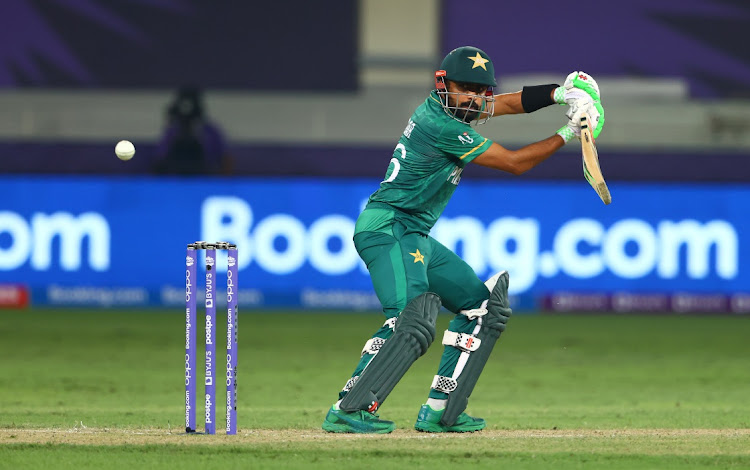 Dubai — Captain Babar Azam led by example as Pakistan beat India in a World Cup showdown for the first time with a 10-wicket romp in a Super 12 blockbuster at the Twenty20 World Cup on Sunday.

Virat Kohli played a captain’s knock of 57 to rescue India from a top-order wobble and help them post a competitive 151/7 in a rematch of the inaugural 2007 final.

His counterpart Babar combined with Mohammad Rizwan to get Pakistan off to a flying start and then overwhelmed the target with 13 balls to spare to snap India’s 100% win record against them in limited-overs World Cups.

Babar remained not out on 68 while Rizwan made an unbeaten 79.

Wary of the dew factor, captains have preferred to field and Babar too followed that trend after winning the toss.

Pakistan did not have to wait long for a breakthrough as Shaheen Afridi (3/31) struck twice in his first seven deliveries to rattle India. The left-arm pacer fired in a searing yorker-length delivery to dismiss Rohit Sharma lbw for a golden duck and, in his next over, rifled one through KL Rahul’s gate to rearrange the stumps.

Suryakumar Yadav hit Afridi for a six but Rizwan took a diving catch behind the stumps to dismiss the batsman and reduce India to 31/3 in the sixth over.

Kohli and Rishabh Pant calmed nerves in the Indian camp and guided the team to 60/3 at the halfway stage of the innings.

Pant then decided to counterattack and hit Hasan Ali for back-to-back sixes but his ultra-aggression ultimately did him in.

Shadab Khan foxed Pant with a googly to induce a skier which the spinner caught himself to dismiss the batsman for 39.

Kohli fell in the penultimate over of the innings while trying to accelerate, but India still made the 150 mark.

Pakistan, in their reply, not only kept their wickets intact in the powerplay overs but also scored briskly with Babar and Rizwan effectively killing off the contest with their rock-solid stand.