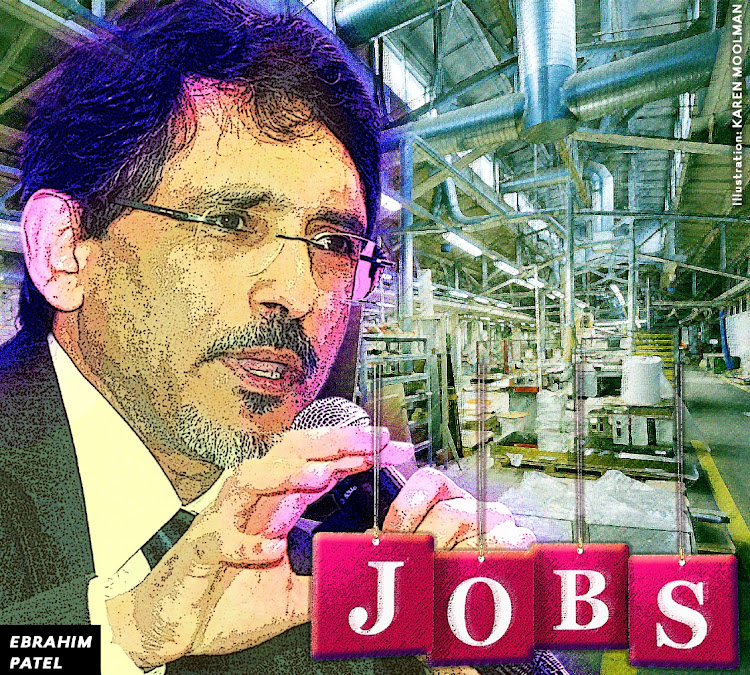 Trade & Industry Minister, Ebrahim Patel released a report last year that was supposed to shed light on the status of the Black Industrial Policy, that was launced way back in 2015. Seven-years later, very little has been achieved and it's seen as yet another failed BEE policy benefiting politically connected individuals. Illustration: KAREN MOOLMAN

Former trade & industry minister Rob Davies launched the government’s Black Industrialists Policy (BIP) in 2015 amid much fanfare, promising that the policy would catapult black South Africans into the big league as industrialists who owned and operated businesses in the manufacturing sector.

Seven years on the BIP has not delivered on that promise, or even gained meaningful traction. Last year Davies’ successor, Ebrahim Patel, released a 104-page report that was supposed to shed light on what has been achieved since the policy’s inception.

The Black Industrialists Report can best be described as a mutual backslapping exercise by Patel’s team. While the concept of reporting back is welcomed, the exercise itself was widely considered an attempt to address lingering scepticism and distrust of the BIP. It was seen as another bid to benefit politically connected individuals, as has happened generally with BEE policy.

The report revealed that the department of trade, industry & competition and its agencies, the Industrial Development Corporation (IDC) and National Empowerment Fund, approved R32bn in funding for 793 black industrialists between 2015 and 2020, of which R18bn was disbursed.

At face value the BIP is a noble policy aimed at addressing the shortcomings of the first and second waves of BEE, wherein a minority of black people acquired non-controlling stakes in white-owned companies. Unfortunately, this focus on buying minority interests in white-controlled businesses resulted in black South Africans playing a limited role in owning and controlling productive enterprises in key sectors and the value chains of the economy.

The thinking behind the BIP when it was conceived was to enable black people to fully pilot their own businesses, helping to reverse the shortcomings of BEE policy, which had left black business people earning dividends from minority shareholdings and board fees as non-executive directors.

It was also thought that the BIP would address the fraudulent practice of fronting, whereby white-owned companies misrepresented or falsified their true levels of black ownership to secure state tenders they would otherwise have not been eligible to get. In the worst cases black people are fraudulently put on shareholder registers or made shareholders without their knowledge.

However, while Patel touted the BIP as making progress in “opening up opportunities” for black South Africans, a closer introspection of the R18bn disbursed to black industrialists indicates that this amount is a drop in the ocean when measured against SA’s gross fixed capital formation (GFCF).

Funding for black industrialisation is a mere 2.8% of the R646.7bn in GFCF registered in the fourth quarter of 2021, which itself was 1.9% lower than the R634.5bn worth of GFCF accumulated in the third quarter. GFCF, which has been on a downward spiral in SA since 2008, comprises investment in additional capital goods such as equipment, machinery, infrastructure and tools that are used to replace old ones to produce goods and services.

If a country has a high GFCF its economy grows faster and creates new wealth and jobs. For example, China’s GFCF fluctuated between 43% and 45% of that country’s GDP between 2009 and 2020, helping the world’s second-largest economy and leading industrial exporter grow its economy at an average annual rate of 8% over the period.

In the third quarter of 2021, SA’s GFCF was about R84.6bn below pre‐pandemic levels, with private investment, the largest component of fixed‐capital formation, accounting for 84% of the shortfall. As a result of weak economic growth and low levels of investment SA is plagued by an unemployment rate that has climbed to 46.2% (including discouraged jobseekers), the highest unemployment rate in the world. There are almost 12.5-million people out of work and 47% of the population receives social grants.

Even worse is that SA’s low level of GFCF as a percentage of GDP falls well short of the 30% target stipulated in the National Development Plan, which if it were to be achieved would push the annual economic growth rate to about 5%, potentially enabling the economy to generate 11-million new jobs and reduce the unemployment rate dramatically.

The development of export-orientated black industrialists under the democratic political dispensation has clearly been underfunded, and the effort is underwhelming compared with the creation of Afrikaner industrialists during apartheid.

The IDC, established in 1940, is credited with financing SA’s initial industrialisation and solving the unemployment in the Afrikaner community, known at the time as the “poor white problem”. This success was largely due to the visionary leadership of two Afrikaner engineers, Hendrik van der Bijl (the IDC’s founding chair) and Jan van Eck (the IDC’s founding MD), who were instrumental in establishing state-owned enterprises (SOEs) such as Eskom, Sasol and Iscor.

These SOEs drove SA’s industrialisation and reduced the country’s dependence on imports. If black industrialisation is to succeed, it needs SOEs that work, and new visionaries such as Van der Bijl and Van Eck who can help SA scale the enormous unemployment mountain that looms over black people in particular.

Black lobby groups have bemoaned the lack of appointment of black people in leadership at Absa, missing a golden opportunity to find a strategy for ...
Opinion
2 months ago

Steel master plan has some redeeming features, but doesn’t go far enough on the critical price issue
Opinion
1 month ago
Next Article

Shoprite sets up BEE trust from which workers will receive dividends

Shoprite sets up BEE trust from which workers will receive dividends