If critical race theory theorists are to be taken at face value, every liberal democracy is pitted in a fight to the death between white racists and black victims 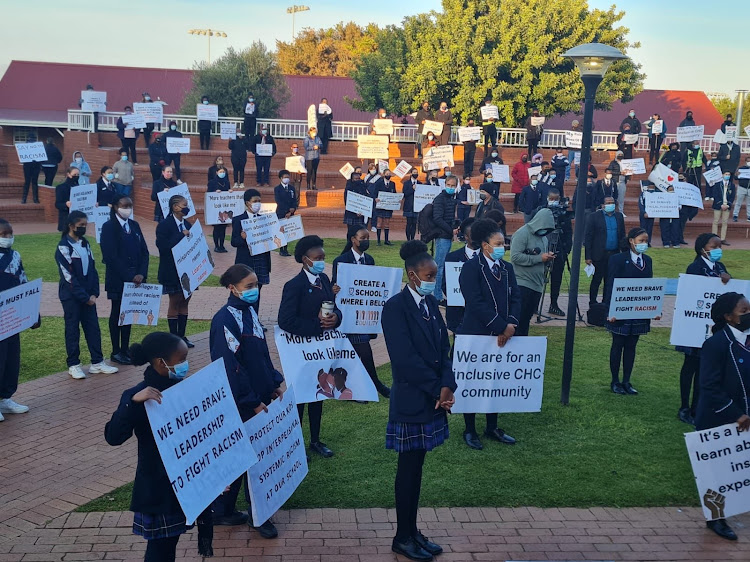 Cornwall Hill College pupils said they only wanted to be taught about racism and not experience it. Picture: SUPPLIED

SA is a racist country in only three respects: its history of institutionalised discrimination; the racial policies of its current government; and its often not-very-brave elites, who replicate that discrimination in the institutions they control. But in a fourth respect — its people, and therefore the most important — SA is not a racist society at all.

The latter observation has been the central finding of opinion polling the Institute of Race Relations (IRR) has done on SA, going back a very long time. The most recent data, released to the media last week to coincide with the launch of our #RacimsIsNotTheProblem initiative, — I will say more about that at the end — finds that only a tiny proportion of South Africans see racism as a particularly serious policy priority, and only a small proportion experience discrimination by their fellow citizens.

You would not think so judging by the priority politicians and elites afford to racism in their policies and public statements — judged by these, there is little in SA today that is not racist.

We are told that poor results in SA’s schools (less than 5% of children will pass matric with a grade of 50% or more in maths) reflects the legacy of colonial racism. But the SA school system has been run under a democratic government for a quarter of a century and spends on education an amount competitive with its emerging market peers, whose education systems produce very good results.

Likewise, the slow SA vaccine rollout is, according to the politicians responsible for it, because of racist “vaccine apartheid” in the West. But what about Chinese and Russian vaccines? Are they also racist? Perhaps. But why do many countries led by people of colour have far higher vaccination rates than SA?

Test these loose allegations of racism and they quickly fall apart into absurdities. When black SA soldiers under black officers, under a black chief of the army, reporting to a black defence minister, appointed by a black president, beat a black man to death for breaking lockdown regulations set by the predominantly black cabinet of a black-led government elected by a chiefly black electorate in a country of predominantly black people, the death is equated to a case of racism.

The damage done by such silliness is serious. Cautionary notes sounded about Jacob Zuma when he came to power were flagged as racist, and just think of the damage this led to. A few years back SA’s universities were attacked as embedded and literally dripping with racism. Now many are sinking in global rankings and top matriculants look for offshore tertiary education options.

The absurdities keep multiplying. The national cricket team is racist. Maths is racist! The economy is recovering very slowly because banks are racist, which would mean the now substantial number of senior black bankers are either racist or pawns of some Machiavellian illuminati that secretly control SA’s banks to stymie its economy. Most recently, foreign investment has become racist — if the recent decision by the Competition Commission on Burger King is taken to its inevitable conclusion.

While the racism of milk and bedrooms rages on, things that are actually racist are said not to be racist. Judging someone by the colour of their skin instead of their character or socioeconomic circumstances is no longer racist. Making a law that will treat people differently because of their race alone is not racist. Holding different races to different standards is not racist. Racial segregation is not racist.

Much of this absurdity owes its recent surge to the rise of critical race theory (CRT) in the West. The theory holds that every liberal democracy is divided into two unbridgeable groups. One is white and privileged and the other is black and disadvantaged. The white group uses its control of the “system” to oppress the black group to maintain access to its unearned “white privilege”. You can never change groups or become a virtuous white or a non-disadvantaged black because the “system” enforces these lines of racial oppression and disadvantage with such rigidity — it is the very purpose of liberal democracies to do so.

What about the facts? It is perfectly observable that not all whites are prosperous and not all blacks are poor. For critical race theorists, facts are themselves racist and therefore irrelevant because they are manufactured by the racist system to con black people into thinking that they are not oppressed. Hence you must discard facts and rely instead on “lived experience” or “my truth” — in other words subjective opinion, often formed after a healthy dose of racial indoctrination by one of the many “consulting firms” popping up in this new industry.

If CRT theorists are to be taken at face value every liberal democracy is pitted in a fight to the death between white racists and black victims. How does the fight end? The fight can only be won by embracing “antiracism” (which does not mean opposing racism) and doing everything to break down the “system”. And what is it in the system that must be broken down? All the trappings of liberal democracy, ranging from markets and capitalism to private property, private institutions (including schools), freedom of speech, democratic institutions, the rule of law and privately held wealth. These must be broken down and handed to benevolent central authorities to distribute equally so that “social justice”, the end objective, is achieved.

What if you disagree with this analysis or reject it? If you are white, it means you suffer from “white fragility” and should be ignored. If you are black, the offence is very much more serious; you are a “race traitor”, and traitors should not be allowed to exist. There is a good analogy of CRT in practice (I don’t remember where I first read it), which goes like this:

Two people walk into a shop at the same time. One is black and one is white. If the shopkeeper (it does not matter what race she/he is) serves the black person first that shows the shopkeeper to be racist as she/he obviously does not like black people or sees them as criminals not to be left unattended in the shop but to be got rid of as fast as possible. If she/he serves the white person first she/he is also obviously racist because she/he values white people more than black people and wanted to show that by making the black person wait.

This is the definition of a totalitarian ideology and it is geared to segregate society and foment conflict between races while crippling whites with such guilt and blacks with such self-doubt that both groups will inevitably capitulate to an ideology which is, in many respects, taking on the character of a new religion. You may not question it. You may not disobey it. Your only choice is to fall in line behind it and chant its chants and recite its slogans — whether you believe these to be true or not and regardless of whether they make sense or not.

The result — and it’s a sign that an institution has capitulated — is reams of meaningless phrase-babble spoken by spokespeople or sent out in newsletters and corporate communications seeking to tick off as much of the CRT dictionary as possible, from commitments to “anti-racism” to rejections of “fragility” and “whiteness”, embraces of “blackness”, disownments of “cultural appropriation”, pained expressions of “privilege” and unintelligible appeals to “intersectionality”.

Regrettably, if not surpassingly, given the “motive force of capitalism” (although I’m sure the firms profiting from this will deny that), a whole industry is springing up around CRT ideology as consultants vie to train firms, corporations and institutions (including schools now) in how to become “anti-racist” and avoid the various infractions that could have them “cancelled”, while training them to admit how racist they are (if white) or enfeebled and oppressed (if black).

The whole thing is a racket revealed best in the impassioned pleas on many of these firms’ websites along the lines that “one training session will not be enough to rid you of your racism” and that “if you are serious about being more aware of how racist you are, you must sign up for lots of training sessions” (at stiff corporate fees).

Any group that subjects their staff to such demeaning indoctrination should be sent to The Hague. We must confront this new religion and the industry it has spawned before both do real harm to the progress we have made as people in overcoming the institutionalised discrimination of apartheid.

Most at risk are children, whose mental and psychological development will be stunted if they are forced to be educated in systems that practise this ideology. Racism must be dealt with where and when it occurs. But it is as wrong to tell white people, especially children, that they are all racist and engaged in a group effort to keep black people down, as it is to tell black people, again children especially, that they cannot succeed because the systems of liberal democracy are geared to ensure they don’t. Such an ideology will do untold harm to the mental and psychological development of young people and create hate-driven segregationist futures no better than what apartheid inflicted on SA, or the denial of civil rights inflicted on black people in America.

But fighting this stuff will not happen on its own. We know of the fear and intimidation that is directed at people who stand up or want to stand up. So, we have decided it is time to launch something to stop it from spreading and drive it back where it has already spread. #RacismIsNotTheProblem is a campaign that will seek to empower a movement to stand against CRT indoctrination and instead advance the liberal institutions and values of respect, nonracialism, freedom of speech, a market economy, democracy, private enterprise, and the rule of law.

Supporters of the campaign should spread the message of the groups within that movement within their own circles. That might seem a small thing to do, but it is in fact significant and  powerful, as they will be equipping people with the information, ideas and arguments, and thereby ultimately the courage, to speak up and/or support those who are already doing so.

FRANS CRONJE: Banks being set up for failure to clear way for state banking sector

Clients could remain liable for loans made on the expropriated property, pushing banks into such a deep crisis that they turn to the state for rescue
Opinion
1 year ago

The bill will make certain that foreign investors stay away — and that the ANC, in its current form, will enrich itself at black citizens’ expense
Opinion
1 year ago
Next Article