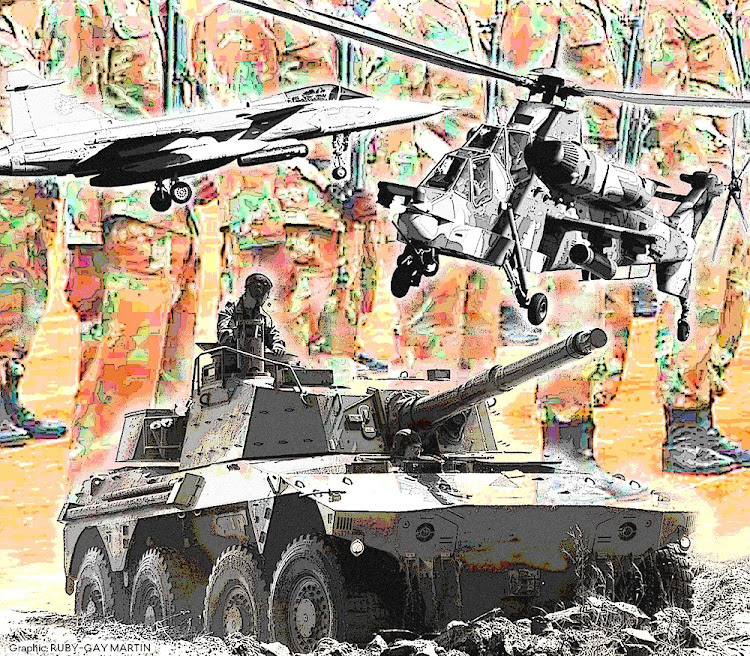 The SA army is not in as desperate straits as the navy, but it does face some real challenges. The most obvious one is the age of its main equipment.

The army’s Olifant 2 tanks were upgraded in the 1990s from Centurions built in the 1950s; the Ratel infantry combat vehicles, the Casspir armoured personnel carriers and the 155mm G5 guns all date from the late 1970s and 1980s, as do the Samil trucks; the Rooikat armoured cars and the G6 self-propelled guns date from the 1990s as does the more modern field engineer equipment.

There are real capability gaps, such as air defence, where there are no mobile systems only some short-range Starstreak missiles and upgraded 1970s vintage towed 35mm cannon, albeit with modern radar systems. A particular gap is defence against small unmanned aerial vehicles such as are used even by guerrilla groups for reconnaissance, command and control and attack.

I am again tempted to ask how many ministers or MPs drive 1990s, 1980s or 1970s cars? But they are happy to let our soldiers go to war in equipment of that vintage. Worse, of the replacement projects the Badger, which is to replace the Ratel, has been held up by indecision, funding cuts and problems at Denel; the replacement of the Samils was bungled by the secretariat and Armscor, also delaying the Casspir/Mamba replacement as they were to use the same drive line. The Umkhonto surface-to-air missile and associated radars have been held up by tight funding, as has acquisition of new light anti-tank weapons.

From being one of the best-equipped small armies in the 1990s the army has become something of a rolling museum. Or it would be, if it had the funds to maintain its equipment properly. As to the question of why Cubans are repairing army vehicles, that is partly the result of outside consultants having convinced the army to outsource “noncore” activities. Why the task was not outsourced to the original manufacturers, all now falling under Denel Vehicle Systems, is a good question; the more so as its factory is reportedly standing empty.

There are other capability challenges: the SA air force has too few Rooivalk and Oryx helicopters to effectively support the army in high-mobility operations; the Rooivalk and Gripen both lack precision weapons; and the air transport force is too small and lacks aircraft with the payload/range performance for regional missions, for instance along the periphery of the Southern African Development Community. In addition, the heavy vehicle transport capability of the railways has been lost, and there is no sealift capability.

Then we come to personnel. The immediate concern is the age, fitness and health of the troops. The average age of the infantry — the most fitness-dependent branch of the army — is 37. That is scary. Infantry soldiers should be young and fit, with good eyesight, hearing and reactions. The only people in an infantry battalion who can reasonably be aged about 37 are the lieutenant-colonel commanding and the regimental sergeant major.

The soldiers should be in their late teens and early twenties, and the average age of a battalion should be between 25 and 29. A battalion approaching middle age cannot do the job as well as it should. Worse, older soldiers are expensive — they are at the top of their pay scales and have families entitled to allowances, medical and housing.

But beyond that question is the question of whether the army in fact has enough people to do what it is supposed to do. Operational tasks include border patrol (target 22 companies) and an infantry battalion in the Democratic Republic of the Congo (DRC). Both tasks require troop rotation so that training can run effectively and soldiers can have a decent family life. That dramatically increases the number of units and troops required:

Any serious army will always have some uncommitted units to deal with emergencies and also longer-lasting contingencies. That could be the parachute and air-assault battalions for the former, and perhaps two infantry battalions as a minimum for the latter. That takes us to 19 infantry battalions. But the army has only 14.

In addition, it should maintain a mechanised brigade to ensure retention of those skills, because in an era of power competition a threat can arise much more quickly than such capabilities can be regenerated. While two infantry battalions of this brigade could be the two also serving as operational reserve in peacetime, this adds armour, artillery, air defence, field engineer, signals, maintenance and workshop units.

The border patrol capability, the rapid deployment force and the mechanised brigade add up to at least 26,000 troops. But what if the army must deploy to, for instance, Mozambique for an extended period? The reserve cannot be committed except as initial force, so the force requirement rises by another four infantry battalions and support elements, or at least 4,000 troops, taking the minimum safe deployable strength of the army to about 30,000.

Here it is worth remembering that during the 2000s there were three simultaneous long-term battalion missions (Burundi, DRC and Darfur) and briefly a fourth (Comoros), which dangerously overstretched the army.

Few armies have much better than 50% deployable personnel, the rest being in headquarters, training units, depots and workshops. That would argue for an army of 60,000. Even assuming the army can be particularly efficient and have a deployable strength of two thirds, that would still require an army of 45,000, compared to the actual current strength of 37,600.

There are about 12,250 reservists, but they are only readily available because the economy is so weak and unemployment so high, and are not suited to all roles, particularly those that demand exceptional fitness and currency on complex equipment. They should serve as emergency reserve, not to plug holes in the regular force.

The bottom line is that the SA army is understrength, overage and handicapped by obsolescent equipment and capability gaps. Not ideal in an unstable region in an era of power competition.

• Heitman is an independent security and defence analyst. This is the second in a series of three articles on the capability of the SA National Defence Force’s three combat services.

What should the response of the SA government be to what is happening in Cabo Delgado, and the pressures it confronts from national corporations and ...
Opinion
4 months ago

WATCH: How the attacks in Mozambique could affect the region

WATCH: How the attacks in Mozambique could affect the region