When it gets a task the SA National Defence Force rises to the occasion, but there is no disguising that it is in dire straits 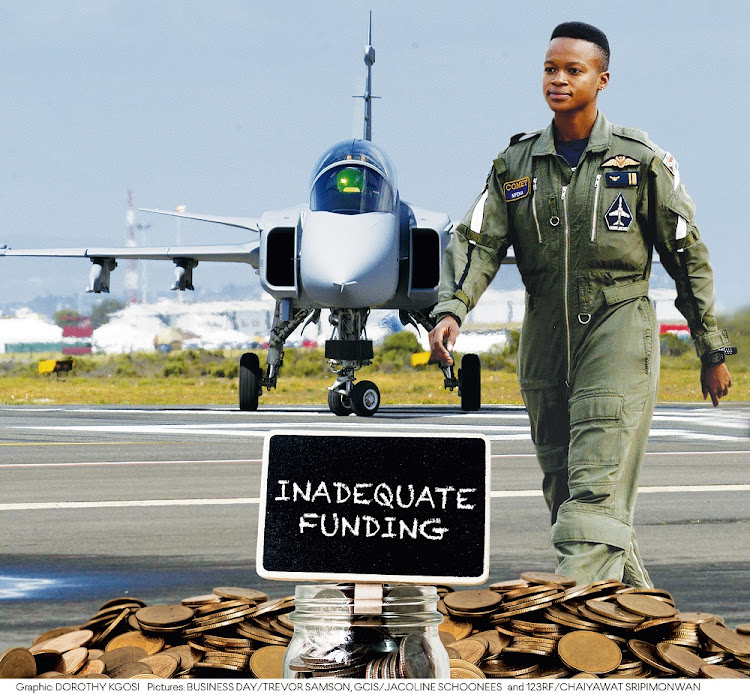 The SA National Defence Force (SANDF) is in deep trouble and will require prompt and serious attention if SA is not to find itself without an effective military.

Some will argue that it would not matter, but we find ourselves in an unstable region in an era of great power competition and expanding military activity by non-state groups. That is not a time to be unable to monitor events or discourage hostile adventures. But the defence force is already limited in its ability to do either and will soon lose more capabilities.

The army lacks the infantry units to handle and sustain any serious contingency beyond its deployment in the Democratic Republic of the Congo (DRC) and along the border; has good but mostly obsolete equipment from 1980-1990 and some from the 1970s and even 1950s; and lacks key capabilities such as modern air defence systems.

The air force has the Gripen fighter but lacks key weapons for it. It has outstanding helicopters — the Rooivalk (too few, no precision weapons), Super Lynx (ditto) and Oryx (1990s vintage) — but lacks transport capacity (half a dozen 1963 C-130 Hercules, a few re-engined 1943 Dakotas and a few Casa 212 light transports from the 1980s). It lacks maritime surveillance capability (1943 Dakotas with only a weather radar and no optronic system) and does not have the radars to cover our air borders effectively.

The navy has four modern light frigates (but only one helicopter each) and three modern patrol submarines but lacks the funding to refit and upgrade them as planned. Its other ships are three former strike craft and one support ship (all from the 1980s), three minehunters (1970s) and some small craft. Four new ships are being built, a new survey ship (to replace the 1970s vintage SAS Protea) and three inshore patrol vessels that will be too small to be really useful.

Worse is that the defence force has not been allocated the funding to close the key capability gaps identified and approved in the Defence Review of 2015, such as air space monitoring and maritime surveillance and also lacks the funding to maintain the equipment it does have. For instance, only one frigate and one submarine have been refitted, and then only the ship systems not the combat systems. Worse still, the defence force lacks the funding to allow pilots to fly enough, its ships to go to sea enough and the army’s units and brigades to train intensively.

Even operational funding is inadequate. Take one example: the navy has funding for 417 sea days. That translates to one ship at sea all year round plus one other ship for 52 days. That is for a country dependent on seaborne trade and with a coastline of 2,800km.

Much is made of the high and rising personnel bill, a bit more than 60% of the budget, and often there is reference to the 40:30:30 formula (40% personnel, 30% each for operations and capital). Unfortunately, that formula bears little relation to reality because the proportion of personnel costs will depend on how many personnel are required and the funding made available.

The SANDF is army-heavy and the army is infantry-heavy, both for sound reasons, but that means lots of people. What has actually happened is that the personnel levels have remained steady and operational commitments increased, while the defence budget has shrunk in real terms. There is certainly some potential to cut personnel (assuming no additional missions and tasks) and there is some over-ranking, but that would not make a critical difference. To provide context, even forces that are less infantry-heavy spend more than 40% on personnel (France, Germany), and some spend more than 70% (Belgium, Portugal).

The primary problem is that the government does not seem to know what level of defence capability it wants. The 1996 White Paper on Defence and the 1998 Defence Review were both based on the assumption that SA would provide at most one battalion for one year for peace support operations. But by 2004 there were three battalions deployed on extended missions in Burundi, the DRC and Darfur; and in 2006 briefly a fourth in the Comoros. That overstretched the army.

Meanwhile the air force, assuming no regional commitments other than that single battalion, had discarded half of its transport aircraft and all of its tanker aircraft, and the navy had discarded its only sealift ship and ordered only four frigates when the fleet demonstrably needed six, as demonstrated by the tasking since 2011 to conduct piracy prevention patrols in the Mozambique Channel, which found it short of ships.

And the defence force is its own worst enemy: despite being underfunded, every time a new mission is dropped into its lap it somehow manages to do the job and generally to do it well. The 2000 floods in Mozambique (14,700 people rescued), the 2011 election support in the DRC and the 2013 prompt deployment of troops to the Central African Republic are just three examples. So the Treasury can argue that it clearly does not need more money when the reality is that every time the defence force does this it is cutting a little deeper into muscle and bone.

The events in Bangui in March 2013 are a good illustration of where this is headed: the army is short of infantry and has no air-transportable combat vehicles, and the air force lacks transport aircraft with the payload-range capability to be useful regionally. That dictated the strength and composition of the force deployed, which proved too small and too lightly armed. Worse, the lack of airlift capacity then prevented prompt reinforcement. The defence force did again pull a rabbit out of the hat with the impressive deployment of a force to counterattack if necessary — special forces, paratroops, Gripens, Rooivalk and Oryx — but that would have been too late had the troops on the ground in Bangui not fought so exceptionally well.

We might not be so lucky next time, so it is past time for the government to decide what it wants and then fund the defence force accordingly.

While there have been times when the SANDF overstepped the mark, the call to abolish it ignores the value the military provides to SA
Opinion
8 months ago

Calls to abolish the army are misguided. But that doesn’t mean there’s not a mountain of problems with it. Instead, we should look to reform it
Opinion
8 months ago