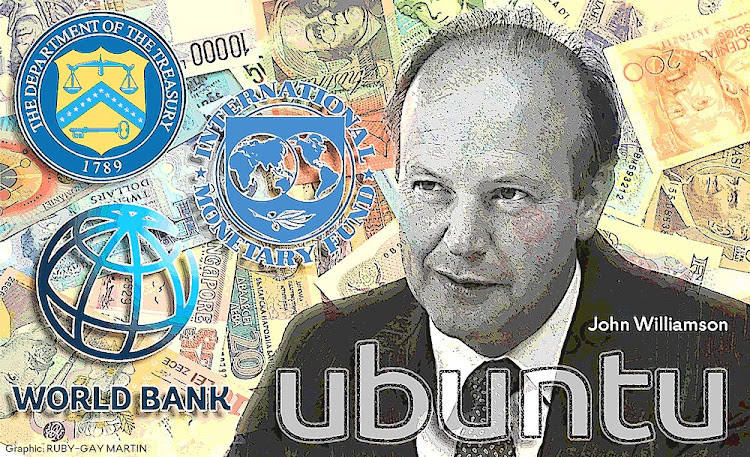 Speaking at the 1992 World Economic Forum (WEF) annual meeting in Davos two years before assuming office as the first president of a democratic SA, Nelson Mandela called for “a global offensive for development, prosperity and human survival”. In laying out his vision for an imminent postapartheid economy, he spoke in terms that would have appealed to the orthodoxy of the time. The new regime would usher in a mixed economy with ambitions to raise the levels of investment and productivity.

As we mark the passing of economist John Williamson, who coined the term “Washington Consensus”, it is worth reflecting on a new society that came into being in a time shaped by popular notions of what Williamson meant. SA economic debates were shaped by — and continue to make reference to — that set of ideas.

In his seminal paper published in 1990 Williamson had Latin America in mind. His aim was to outline a “desirable set of economic policy reforms” to deal with the debt crisis playing out in that region at the time. Williamson presented a set of 10 policy instruments, which quickly came to be treated as commandments in certain quarters:

But this was not meant to be an economic recipe to be followed slavishly, as Williamson argued in later years. There are two ways the Washington Consensus has come to be understood, Williamson wrote in The Strange History of the Washington Consensus, published in 2004. In one variant of interpretation, the consensus is shorthand for the policies of the Bretton Woods institutions as they advocated for economic reform worldwide.

Regarding exchange rates, the international financial institutions tended towards directing countries to make a clear choice between a “pure” floating exchange rate or one fixed to a peg, whereas Williamson wanted currencies to be actively managed towards a competitive level.

The Bretton Woods bodies also paid far greater attention to institutions and governance, whereas Williamson did not.

The other way to understand the Washington Consensus is to conflate it with neoliberalism or market fundamentalism: “This I regard as a thoroughly objectionable perversion of the original meaning,” Williamson wrote in 2004.

In SA, the ANC-led government removed tariff barriers rapidly, removed state involvement and price regulation in markets such as agriculture, removed industrial subsidies in apartheid-era industrial parks and steadily liberalised capital flows. But this was a policy mix attuned to the need to dismantle racial inequality, to protect labour rights and to tackle market concentration and uncompetitive behaviour.

A progressive taxation regime was introduced to extend social protection to the black poor, who had been largely excluded from the generous welfare state once reserved for whites only. The postapartheid economic policy orientation was inspired by the ethos of ubuntu, which holds that we realise our humanity through upholding the humanity of others. In this worldview, the state has an obligation to deploy all means to promote an inclusive economy based on shared prosperity.

For white-owned business, led by conglomerates that had grown wealthy and powerful under apartheid, the agenda of liberalisation and market discipline became a rallying cry. Anxious about property rights and raring to invest in global markets, business cloaked itself in the narrative of liberalisation, privatisation and deregulation. The support the apartheid state had provided to interests in mining, agriculture, energy and basic industry — for example, through suppression of black wages and lavish industrial subsidies — was quickly forgotten.

The Left, including trade unions allied with the ANC, accused the government of following the Washington Consensus (commandments) too closely. In this view, the government was proceeding in a manner that neither supports the aims of the liberation struggle nor addresses the terrifying economic realities on the ground.

Economic outcomes in the early years were encouraging. The three prominent global credit ratings agencies all had SA on investment grade by 2007. A strong global economy, a commodity boom anchored by China, the rise of the black SA consumer and increasing stature as continental champion drove this early success.

Yet as the commodity market cooled and the financial crisis marred the global economy, the limits of that early success became clear. Unemployment remained high, poverty edged up again and the level of inequality is one of the world’s highest. Despite SA never being a case study in the Washington Consensus as popularly understood, there is a greater appreciation of those very things Williamson sought to add to his agenda in later years, such as the importance of institutions and the insight that “the objective of economic policy should not be formulated as just increasing the growth rate ... but that governments should also recognise that it matters profoundly who gets an increase in income”.

Inequality has risen globally. The case for deregulation and globalisation is fiercely contested. The ills of deindustrialisation are not only felt in communities in Johannesburg but have also taken their toll in the American Rust Belt and old industrial Britain.

Indeed, as the world grapples with how to build back better, the Economic Reconstruction and Recovery Plan announced by President Cyril Ramaphosa aims for the structural transformation of the economy towards a digitally enabled, progressively greener economy with deeper linkages to its home continent and the rest of the globe. A key pillar of this agenda is the (re-) building of the institutional capabilities of the state and the development of know-how across society to support that economic transformation.

Measures to tackle the economic exclusion of those who have been kept on the margins of the economy — women, youth, black people — form a key feature of reconstruction efforts.

In its economic policy strivings SA, a microcosm of the world, holds the seeds for an ubuntu-inspired global consensus premised on economic justice and shared prosperity.

• Makhaya is economic adviser to President Cyril Ramaphosa. This article was first published on the WEF online platform (weforum.org/agenda).