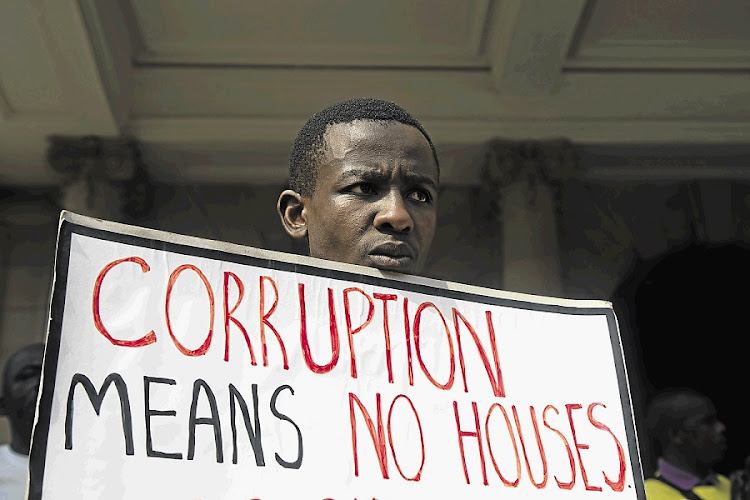 Despite a number of positive developments during 2020 on the anti-corruption front, SA’s score on Transparency International’s corruption perceptions index remains static. There are several possible reasons for this, not least of which is the governing ANC’s apparent unwillingness or inability to tackle corruption in its own ranks.

The index, released last week, is an authoritative annual report surveying perceptions of corruption in 180 countries. The report is compiled from a composite of surveys undertaken in the first half of 2020.

The index scores countries on a scale from 0 (highly corrupt) to 100 (very clean). Two-thirds of the countries surveyed scored below 50. SA’s score — 44 out of 100 — has remained largely unchanged for the past decade, and again places it in the category of countries deemed to have a serious corruption problem. It ranks a mediocre 69th of the 180 countries surveyed.

We can take no comfort that we exceeded the average score of 32 for the countries of Sub-Saharan Africa, the lowest of any region. While there is always room for strengthening SA’s statutory and institutional framework for tackling corruption, the fact is that our network of laws and institutions more or less meets international standards. Indeed, since the beginning of the administration of President Cyril Ramaphosa, anticorruption laws and institutions have been markedly strengthened — the establishment of a dedicated investigating unit in the National Prosecuting Authority (NPA) and a tribunal in the Special Investigating Unit (SIU) are examples.

At least as important, the Ramaphosa administration has replaced the corrupt leadership of law enforcement agencies and state-owned enterprises, both of which were targeted during the period of state capture that characterised the Zuma years. This strengthening process has continued beyond the period of the index surveys, most notably manifest in the imminent promulgation of a statute regulating the funding of political parties.

Other positive anticorruption developments were scattered throughout 2020. In February the NPA advertised 800 posts. In July, the Zondo commission’s regulations were amended to allow the NPA to use evidence emerging from commission hearings in criminal prosecutions. On August 17 the president announced that the Treasury had started publishing, for public consumption, details of contracts and tenders awarded as part of the national Covid-19 response. And yet our index score and ranking has barely moved despite these positive developments.

Thanks largely to the various commissions of inquiry — especially the Zondo commission — the period surveyed was also characterised by shocking revelations of corruption and greed. This may have persuaded residents of the government’s willingness to expose corruption at the highest level, thus improving perceptions of the commitment to fight corruption.

On the other hand, it is likely that most South Africans have been exposed for the first time to the depth and breadth of the rot in both the public and private sectors, thus strengthening the perception that corruption has got beyond remedy, and accounting for the failure of the needle to move on the corruption perceptions index. When the public absorbs recent revelations at the Zondo commission of how intelligence agencies acted as a private piggy bank on a truly eye-watering scale, the perception of uncontrollable corruption will be enhanced.

Three factors undoubtedly account for the public perception that corruption remains rampant. The first is a perception that the government lacks the political will to tackle corruption. Year after year, South Africans have heard promise after promise from various government and political party leaders that they will root out corruption and ensure the guilty are brought to book. However, the index results show that again the SA government is more talk than action, and that its word is not to be trusted. The bright spots that break through the clouds on occasion are swallowed up in the relentless murk of corruption and cynical, unfulfilled promises.

The second is the rampant corruption that has bedevilled the procurement of goods and services necessary to deal with the Covid-19 pandemic. While this was obviously not factored into the latest score, it will reflect in following years. Now exposed, these scandals seem to have finally convinced South Africans that no depths are too low for the corrupt: nurses can die, neighbours can starve, as long as crooked public officials and businesspeople can feather their own nests. If the purchase and distribution of vaccines follows the same corrupt path, expect a decline with next year’s index.

Third is the lamentable state of the ANC. Until Ramaphosa and his allies in the leadership of the state demonstrate that they are able and willing to tackle brazen corruption in the ranks of their own party they will not make a dent in corruption elsewhere, and they will not reclaim the public’s trust. To be told by the Magashules and Bongos, the Mahumapelos and Zwanes that they too are committed to anticorruption, is to rub salt into the wounds of the SA public and to deepen their distrust of their political leadership.

Corruption Watch therefore urges the government to continue with its work of capacitating and reinvigorating crucial anti-corruption bodies such as the SIU, the NPA and the auditor-general. They must be allowed to do their work without fear or favour if corruption is to be stamped out or, indeed, if SA is ever to improve its index score.

We also particularly would like to see increased protection of journalists, activists and whistle-blowers who expose corruption, often at a great personal cost. The Zondo commission has shown us how important whistle-blowers are in fighting corruption, but victimisation and physical harm are powerful deterrents. Whistle-blowers should have the confidence to come forward without fear of reprisals. Their efforts, in concert with fully functional law enforcement, can put a stop to the machinations of the corrupt.

The survey, published by the foundation of Sudanese telecoms tycoon Mo Ibrahim, notes broad deterioration in human rights, security and rule of law
World
8 months ago