Health department spokesperson Foster Mohale says it is not fake, but merely premature 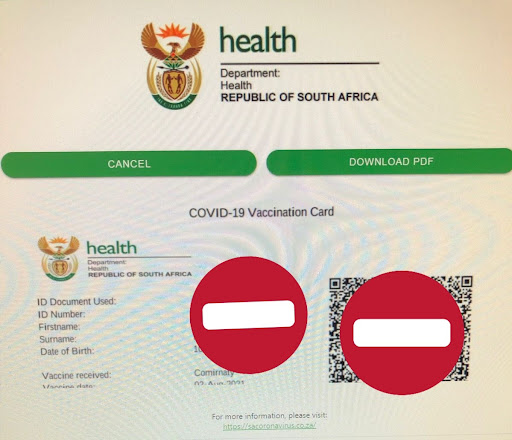 What the vaccination certificates downloaded on Thursday looked like. Picture: Twitter/@Ant_I_R_Legend

Many South Africans were perplexed after they downloaded their digital vaccine certificate, only to be told by social media that the site they used was "fake".

But then it turned out that the claim of fakeness was fake itself, and that the site is legitimate but is still under development.

“We are going to officially launch tomorrow and we are testing the site, so you have to take it live to test if it is working or not,” he said.

“Once it’s live people, who are lucky can download it, but we are encouraging people to exercise patience. We want to assure you there is no breach of any personal info.”’

The explanation on a vaccine certificate downloaded on Thursday. Picture: DEPARTMENT OF HEALTH.

After a meme spread claiming the site was fake, those who had downloaded their certificates became anxious that their personal information had been shared with an outside party, while others worried that the whole vaccine certificate system had fallen apart.

Earlier this week, the health department released a statement saying the site was not officially live yet but that some people had been lucky enough to download their certificates.

By Thursday morning, many others had downloaded their certificates without a hitch — and then the meme of fake news spread.

The site is scheduled to officially be launched on Friday.