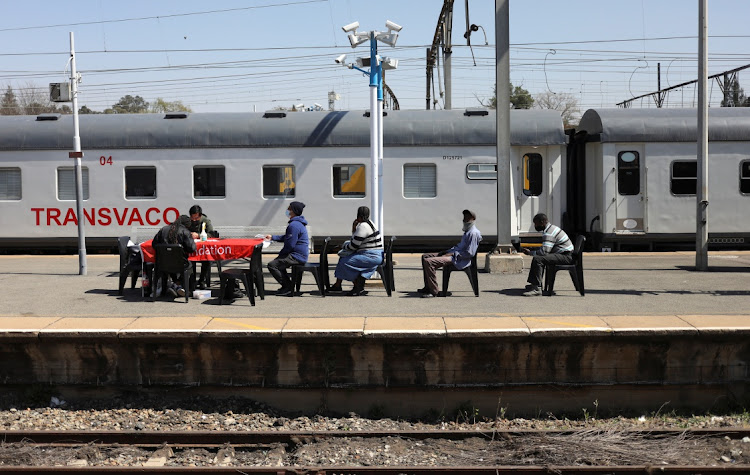 People sit in line as they wait to register next to the Transvaco coronavirus disease (COVID-19) vaccine train, after SA's rail company Transnet turned the train into a COVID-19 vaccination center on rails to help the government speed up its vaccine rollout in the country's remote communities, at the Springs train station on the East Rand on August 30 2021. Picture: REUTERS/SIPHIWE SIBEKO

SA scientists say a new Covid-19 variant, with a concerning number of mutations, spread at a slower rate in August than it did in July.

The so-called C.1.2 variant accounted for just 1.5% of all virus samples sequenced in the country in August compared with 2.2% in July, according to the Network for Genomic Surveillance SA.

The variant, first identified in SA, has been found in a number of countries including Democratic Republic of Congo, Mauritius, Portugal, New Zealand and Switzerland.

The slowing of the spread of the variant could indicate that it’s unlikely to become dominant in the manner that previous mutations such as the Beta and Delta variants have become. The Delta variant, first identified in India, is currently dominant in SA.

In SA nobody understands the scale of the public health, humanitarian and economic crisis
Opinion
1 week ago

ADRIAN GORE: Why we are mandating vaccines for Discovery’s SA-based employees

This move goes beyond merely ensuring a safe workspace — it has an ethical, collective good at its heart
Opinion
1 week ago