Thabo Mbeki bemoans the prevalence of careerists in the ANC 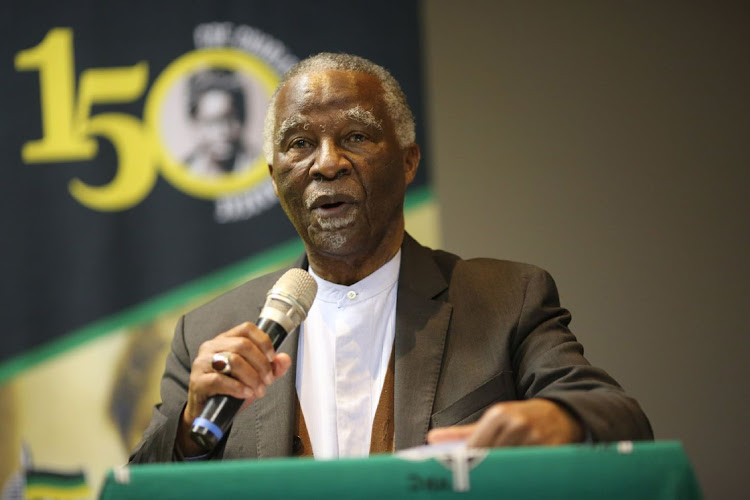 Former president Thabo Mbeki says the ANC did not have a good story to tell, which is why he could not campaign for the party until 2019.

“The reason it was possible in 2019 to say that this time I will speak out to say, ‘please let’s vote for the ANC’, was because of what the manifesto said. It did not say, ‘We’ve got a good story to tell.’ It said, ‘We’ve made mistakes, we’ve done wrong things.’

“Remember that manifesto, the title was ‘Let us grow SA together’, but it pointed to the mistakes. It said, ‘You see there is corruption, serious ethical problems, state institutions not delivering to the people and we, the ANC, make a commitment that we are going to grow SA together with you, and therefore make a commitment to correct the wrong things that had happened.

“So it seemed to me that at last the ANC was telling the truth and making a very serious commitment, and therefore it was possible to say, ‘Vote ANC’,” he said.

Until recently Mbeki has rarely participated in ANC activities since his removal from office more than 12 years ago.

On the party’s internal renewal agenda, Mbeki suggested that the ANC would have to rid itself of careerists in the party to achieve this. He said it was going to be important for the ANC to honestly answer the question: “What is it that we do to achieve [this] renewal?”

“When you have people at national level who openly defy the decision of the NEC, even taking the ANC to court to challenge the NEC, what is that?” he said. ANC secretary-general Ace Magashule is taking his own party to court for suspending him after he refused to step aside while he faces corruption and fraud charges arising from a R255m asbestos tender in the Free State.

Nelson Mandela, said Mbeki, had at the ANC’s national conference in Mahikeng (formerly Mafikeng) in December 1997, defined careerists as people who joined the party for their own personal benefit.

He said the weekend meeting reflected on what Mandela had said about a negative feature that had emerged — three years after the ANC went into government — of careerism within its ranks, with many of its members seeing their party membership as a means to advance their personal ambitions, to attain power and access to resources for their individual gratification.

“They toyi-toyi very well and do all of that. But are they ANC?”

Mbeki said Mandela acknowledged the party had found it difficult to deal with careerists in a decisive manner, and may have given the space to opportunists to pursue their counter-revolutionary goals to the detriment of the movement and the struggle.

“Has that problem been solved of people who entered the ANC, wear the ANC T-shirts and say ‘viva ANC, viva’, and know all of the songs and they toyi-toyi very well and do all of that. But are they ANC?”

Mbeki said in his 2017 report on the state of the ANC, then secretary-general Gwede Mantashe repeated what Madiba spoke about 20 years earlier, saying the consequence of some of that was happening, including:

According to Mbeki, this weekend’s meeting admitted that the party had not addressed successfully all the matters raised by Madiba in 1997 about careerists. He said because the party had failed in this regard, there were many such careerists in the organisation today.

“Therefore when we say renewal ... can you renew the ANC with those careerists? The answer was no, you can’t, it wouldn’t make sense.”

The ANC would have to address how it gets rid of the careerists, as a practical and real question, he said.

Update: May 31 2021
This story has been updated with new information.

TOM EATON: Voters are insane in the brain as the ANC just lobs more pain

But the fact is, the reason we’re so far behind in our rollout isn't because you or I somehow forgot to order the vaccine in time, or nicked billions ...
Opinion
2 weeks ago
Next Article