The crypto market is increasingly being characterised by big investors, rather than smaller retail players who drove its early movements 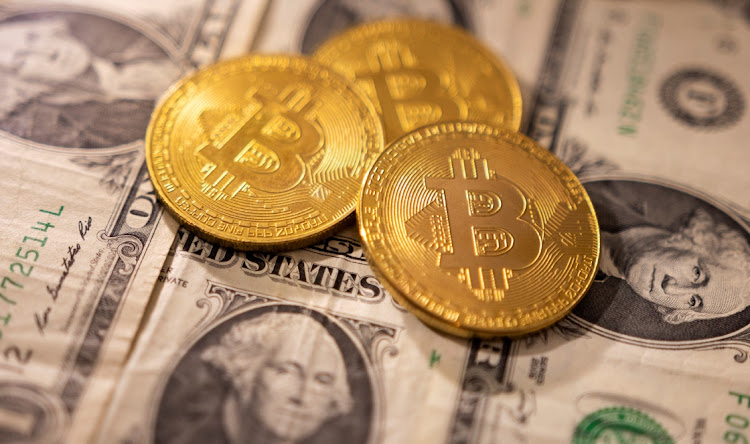 A representation of cryptocurrency Bitcoin is placed on US dollars in this illustration photo. Picture: REUTERS/DADO RUVIC

Bengaluru — Bitcoin is growing up. The original cryptocurrency turns 13 this year and is showing signs of becoming a more mature financial asset — but watch out for the teenage tantrums.

This drift towards the mainstream, driven by the big bets of institutional investors, has seen bitcoin become sensitive to interest rates and fuelled a sell-off in the coin this month as investors braced for a hawkish Federal Reserve policy meeting.

The cryptocurrency, born in 2009, was still on the fringes of finance during the Fed's previous tightening cycle, from 2016 to 2019, and was barely correlated with the stock market.

Bitcoin has been positively correlated with the S&P 500 index since early 2020, according to Refinitiv data, meaning they broadly move up and down together. Their correlation coefficient has risen to 0.41 now from 0.1 in September, where zero means no correlation and 1 implies perfectly synchronised movement.

By contrast, that coefficient was just 0.01 in 2017-2019, according to an International Monetary Fund analysis published this month.

“Now that bitcoin is not entirely held by early adopters, it's sitting in a 60-40 type portfolio,” said Ben McMillan, chief investment officer of Arizona-based IDX Digital Assets, referring to the institutional strategy of allocating 60% of a portfolio to relatively risky equities and 40% towards bonds.

“It’s not surprising that it's starting to trade with a lot more sensitivity to interest rates.”

The crypto market is increasingly being characterised by big investors, rather than the smaller retail players who drove its early movements.

The total assets under management of institutionally focused crypto investment products rose in 2021 from $36bn in January to $58bn in December, according to data provider CryptoCompare.

On top of this, there was bumper buying from the corporate likes of Tesla and MicroStrategy, plus hedge funds adding crypto to their portfolios.

“The cryptocurrency ecosystem grew from a total market valuation of $767bn at the start of the year to $2.22-trillion by the end of the year,” CryptoCompare said.

The drift towards mainstream finance raises broader questions in 2022 and beyond about whether bitcoin can retain its role as a diversification play and hedge against inflation.

Bitcoin is also often regarded as a hedge against inflation, mainly due to its limited supply akin to gold, the more-established store of value in an inflationary environment. However, its correlation with stocks has seen it become increasingly roiled along with broader markets by the largest annual rise in US inflation in nearly four decades.

“In the current case, bitcoin is not acting as an inflation hedge. Bitcoin is acting as a risk-proxy,” said Nicholas Cawley, strategist at DailyFX, based in London.

Jeff Dorman, chief investment officer at digital asset management firm Arca in Los Angeles, added: “It is also a tad ironic given that the bull case for many digital assets in spring 2020 was expectations for higher inflation. Now that we actually have inflation, it is weighing on prices.”

Evidence of investors increasingly holding onto bitcoin for the long-haul is growing.

Kraken Intelligence, a research blog from cryptocurrency exchange Kraken, said that about 60% of all bitcoin in circulation hadn't changed hands in over one year, the highest level since December 2020.

Meanwhile funding rates for perpetual swaps across major exchanges — indicative of sentiment among investors betting on bitcoin’s future price movements — were fairly flat, hovering around 0.01%, as per data platform Coinglass.

Investors are displaying a notable unwillingness to spend coins, according to blockchain data provider Glassnode.

“In the face of tumultuous and unconvincing price action, this signals that this cohort of holders are patiently waiting for higher prices to spend their respective supply,” it said.

Despite the notion of ‘Web 3.0’ firmly attaching itself to currencies, they are dispensable
Opinion
3 months ago

Prices jump ahead of planned launch of SundaeSwap, its first DeFi  exchange offering yield mining
Markets
4 months ago
Next Article