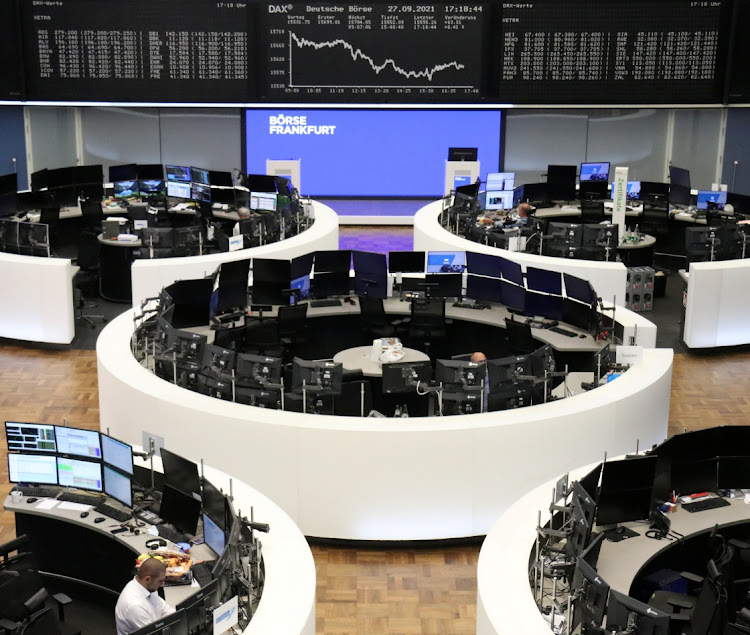 London — Investors sought to staunch the bleeding on Wednesday after world stocks suffered their worst rout since January, while US and European borrowing costs raced to their highest in months.

Asia managed to slow the falls and the pan-European Stoxx 600 index rebounded 1% in early trading after shedding 2.2% on Tuesday and after all three major Wall Street indices suffered their steepest drops since mid-July.

The global benchmarks for borrowing costs — the yields on US and German government bonds — edged lower, with traders waiting to hear from the heads of the European Central Bank, the US Federal Reserve, the Bank of Japan and the Bank of England later

“The question that will come in the next 10 days is will the US Treasury yield keep pushing above 1.5%,” said Société Générale strategist Kenneth Broux. “That was a sort of breaking point for broader risk assets when stops went off and the sell-off started accelerating.”

Broux said the question for October and the rest of the year would be whether inflation pressures started to abate. “The 1.5% level [on US Treasuries] is really pivotal,” he said.

In the currency markets, the run up in yields, prompted by signs that the Fed wants to start cutting stimulus by the end of the year, saw the dollar touch an 18-month high against the yen and set its highest level of the year versus other major peers too.

Doubts are re-emerging about the global recovery at a time when the Fed is set to taper stimulus and the US administration is stuck in debt-ceiling talks that could lead to a government shutdown. China is also grappling with a power crunch that has hit its economic output.

The MSCI’s broadest index of Asia-Pacific shares outside Japan fell 0.84% and was heading for a 9.4% decline for the third quarter — its worst quarterly performance since the first three months of 2020, when global markets were roiled by the initial spread of Covid-19.

World stocks are heading for their first red quarter since the peak of Covid panic, while the dollar is on course for its best year since 2015 and gas and energy prices have surged.

Coffee is up 25% for second quarter in a row. The Baltic Dry index of global freight prices has surged 40% to add to 50% and 65% rises in previous two quarters, while China’s woes have seen iron ore slump 45%, which will be its worst quarter on record.

“We still see inflation as a risk, but our base case is that it will be transitory and come back to more normal levels during next year,” said Osman Sattar, S&P Global’s director for EMEA financial institutions.

But companies face pressure on margins as higher energy prices are locked into next year’s bills.

US Futures suggested a risk-friendlier mood could return on Wall Street. S&P 500 e-minis were up 0.6% and those for the Nasdaq were up 0.8% after that index had been pounded 3.6% on Tuesday by heavy tech stock selling.

China’s worsening power crunch pushed investors out of Chinese stocks vulnerable to factory shutdowns, including chemicals and steelmaking, even as the country’s economic planning agency sought to reassure residents and businesses.

Debt-stricken property giant China Evergrande’s shares leapt 15%, though, after it said it planned to sell a 9.99bn yuan stake in Shengjing Bank.

Investors are waiting to see whether the developer makes an overdue interest payment on a dollar bond and S&P said another major property firm, Fantasia, was also at risk of default.

Benchmark 10-year US rates have gained 25 basis points in five sessions but inched down in Europe to 1.5097%, having topped 1.54% — the highest since mid-June — the day before.

“We think [10-year Treasury yields] are likely to rise to around 1.5% to 1.75%, so they obviously still have room to go,” said Daniel Lam, senior cross-asset strategist at Standard Chartered.

Lam said the rise in yields was driven by the US looking set to start tapering its massive asset purchases by the end of this year.

Gold edged higher, with the spot price at $1,739.5 an ounce — up 0.4% from the seven-week low hit the day before as higher yields hurt demand for the non-interest bearing asset.

We see gold at about $1,500 by the end of 2022, especially with tapering having completed its course by then, one analyst expects
Markets
3 weeks ago
Next Article