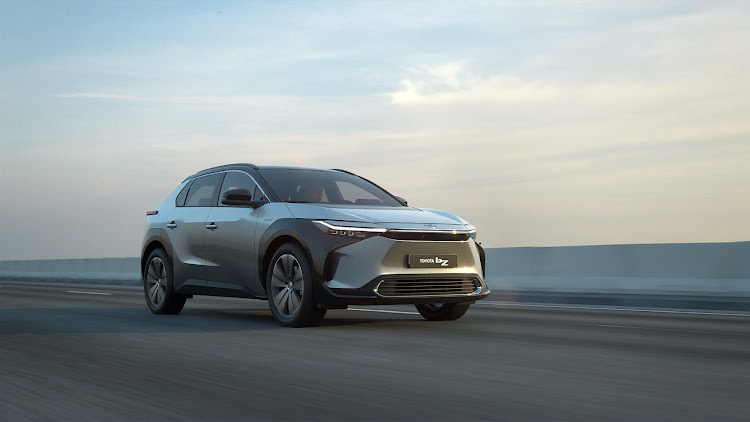 Toyota is accelerating up its push into zero-emission vehicles with the release of its electric SUV. Picture: SUPPLIED

Tokyo — Toyota disclosed on Friday the driving range and other specifications of its bZ4X sport utility vehicle (SUV), the first in a series of EV-only models it plans to launch globally to catch up in the zero-emissions market.

The world’s top-selling carmaker has said it will launch 15 battery EV (BEV) models worldwide by 2025, but so far its plans seem modest compared with those of US automakers such as General Motors and Ford.

Toyota did not announce a price range or sales target for the bZ4X but said joint development and procurement of core components with affiliate Subaru would help rein in the normally high cost of producing BEVs.

The model would also initially be built on a mixed line with petrol-engined cars, both in Japan and China. It will be sold in Japan, North America, China and Europe starting in mid-2022, the company said.

The car will be offered in front-wheel and four-wheel drive versions, with a driving range of about 500km for the former. An optional roof-mounted solar panel can be used to charge the battery in the absence of a charging station or in disaster conditions, Toyota said.

A latecomer to the mass BEV market, Toyota has long touted the merits of hybrid vehicles, a category it has dominated for more than 20 years, for their lower price and accessibility and by extension, a greater role in cutting CO2 emissions.

As governments tighten zero-emissions regulations, Toyota has said it would invest $13.5bn through 2030 on EV batteries and introduce seven bZ series models by 2025.

With more fuel price rises expected, here’s a guide to SA’s most frugal and reasonably-priced SUVs
Life
1 month ago