Ninety years after learning to drive in a Model T, UK man has an electric blue-oval experience 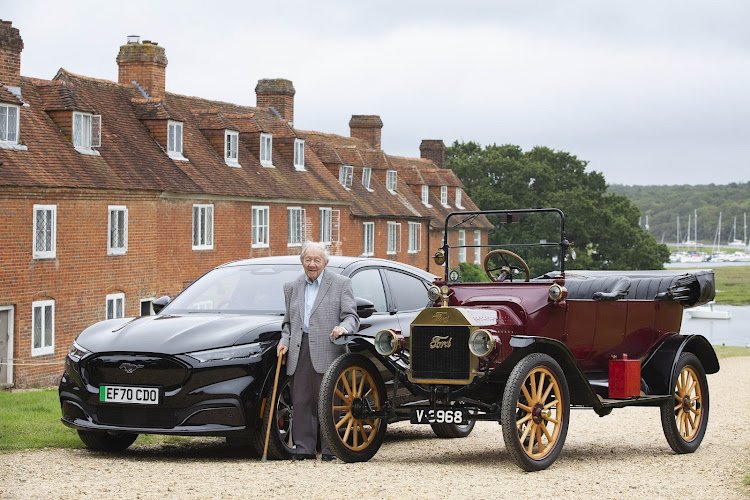 Harold Baggott learned to drive in a Model T and recently got a chance to drive Ford’s latest and most high-tech car: the Mustang Mach-E. Picture: Supplied

At 101 years old, UK’s Harold Baggott has pretty much seen it all, including the exponential march of automotive technology.

Much of his motoring experience has been at the wheel of Fords, starting at age 10 when he learnt to drive in a Model T on a farm. Now, 90 years later and with his family having owned 20 Fords, he has experienced the latest and most hi-tech car from the blue-oval stable: the electric Mustang Mach-E.

The centenarian, who drives daily, was reminded of his Model T experiences with rides in a 1915 model from Ford’s heritage collection in the UK before taking his great-grandchildren for a spin in the battery-powered Mustang at the British Motor Museum in Beaulieu, near his Hampshire home.

Driving 15-year-old Felix, who has ambitions to be a racing driver, and his 12-year-old brother Charlie, Baggott was struck by the quietness of electric motoring.

He said: “Since the age of 10, I’ve retained my interest in motoring and today find myself interested in the switch to electrification after the government phasing out the traditional combustion engines I’m used to. I have reminisced about my driving history with the Model T and seen what the future has in store. It was exciting to get behind the wheel of what I expect to see my great grandchildren will be driving.”

The Mach-E is a technological time warp from the first Ford he drove 90 years ago. The Model T, nicknamed the “tin Lizzie”, was the first affordable automobile and made car travel available to middle-class Americans. It was powered by a 2.9l four-cylinder engine producing 15kW, had a two-speed transmission, and reached a top speed of 72km/h.

Ford bets on an electric Mustang to charge its turnaround