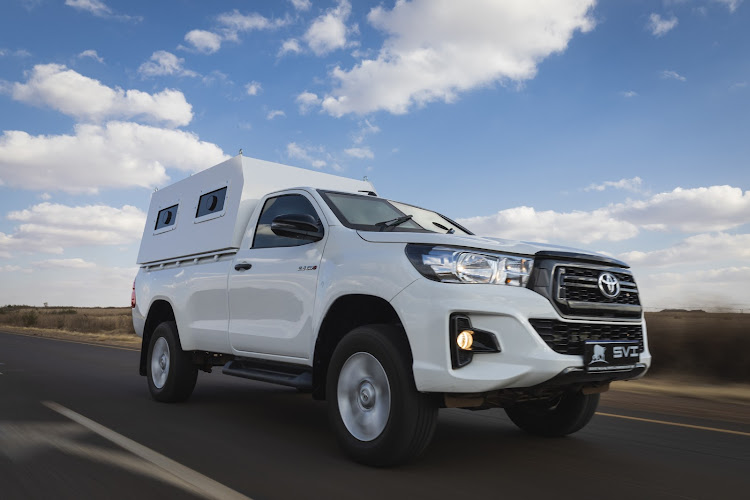 The two-seater cabin and six-seater canopy can both be armour-plated. Picture: SUPPLIED

SA’s most popular bakkie, the Toyota Hilux, is now available in armour-plated guise.

SVI Engineering, specialist manufacturer of armoured products, says it has developed a cost-effective anti-riot solution for a single cab Hilux that can carry up to eight people in hostile environments.

The cabin is protected by the SVI B6 Stopgun armouring kit which covers the glass, body and roof surrounding the occupants. It provides ballistic protection against 7.62x51 mm assault rifle rounds.

Installation time is three weeks, and includes a suspension upgrade to deal with the vehicle’s extra weight. Run-flat tyre protection can be ordered as an option.

The canopy is manufactured from special armoured steel providing B4+ ballistic protection against AK47 assault rifle fire. The unit bolts to the chassis of the vehicle and provides six seats with seat belts, windows with gun ports, an escape hatch and air conditioning for convenience. The armoured canopy build time is about six weeks.

The vehicle is homologated to a gross vehicle mass (GVM) of 3,499kg and can be driven on a standard car licence.