If the Public Investment Corporation (PIC) board wanted to allay its doubts about transformation at Absa under a white CEO, it could have done worse than attend the Klein-Karoo Nasionale Kunstefees (KKNK).

Held from March 29 to April 3 in Oudtshoorn after a hiatus of two of the annual festivals, Absa was the chief sponsor this year, along with Media24.

If transformation is about marginalising Afrikaners and boosting black headcount, the PIC and other critics may have had a point about Arrie Rautenbach. But if it is about working to transform a racist, colonial mindset into an Afrocentric one in which the humanity of all the continent’s peoples is explored, the Absa-banner-festooned festival — with its own “Rooiplein” (Red Square)— was the place to be last week.

Much truncated after emerging from the lean Covid-19 seasons, the KKNK was strangely hidden behind the usual ostrich kitsch and Cango Caves cajolery — on the lawn of the CP Nel Museum, there was a lone speaker blaring music and no straw bales or food stands swarming with kortbroek-en-plakkies customers. No roosterkoek, no pancakes, just Americanos and doughnuts and the only boerewors roll stalls were confined to a sort of Group Areas festival market.

And yet there was something brave about its resurrection: struggling even before Covid-19 with declining attendances and ticket sales, the organisers could have gone populist and made their peace with Steve Hofmeyr to draw the moneyed crowds. Instead it came back sturdily with its tried-and-tested formulas of high culture clashing with low — and with some new approaches emanating from pandemic introspection.

And “transformation” is a concept that popped up in interviews with Hugo Theart, artistic director. The pandemic was an opportunity to rethink what they were doing, he told Netwerk24’s Murray la Vita. One aspect was providing an “essential service”, since the social distancing and separations of lockdown showed that mental health is a primary need which the arts can meet. But most of all came the realisation that the festival had to change from “the inside to the outside”, transformation starting at home.

Theart cites the Karoo Kaarte project, but there were numerous other instances where plays, art, comedy and even music plugged into public discourse in a serious and sometimes even aggressive way, on topics from land and restitution to gender violence and toxic masculinity. And for the headcounters of the PIC, black artists featured prominently everywhere and some items had nary a white face in sight on stage.

Karoo Kaarte refers to a local saying for meeting for a chat: “kaarte sny” (cutting cards). Residents of the Toekomsrus and other townships were able to access the photo archive of the CP Nel Museum, as well as that of the KKNK itself, which started just after 1994 and is thus three decades old. They were encouraged to assemble collages and add photos from their own or family albums.

The project’s theatrical side found expression in Op hierie dag, based on Dylan Thomas’s Under Milk Wood, which was workshopped by Neil Coppen around tales and tidings from local residents. In Karatara, one of the survivors of the Knysna fires takes part in a dance drama, which also retrieves the memories of the marginalised in those disasters.

A star production was Bientang: bloedspoor by Jolyn Philips, which the KKNK gave its Kunste Onbeperk Award for a young artist after her success as poet, writer and band leader. Based on her award-winning epic — or rather contra-epic — poem about the denizen of Bientang’s Cave in Hermanus, it voices her anger over the erasure of whole histories by the careless marketing of the restaurant now obscuring the spot.

PIC board members might discover much to chew on over their Karoo lamb shanks in the stunning felt collages of the Mapula embroidery project from Winterveld.

But what would possibly have pleased members of the PIC board most, were the art exhibitions, sponsored by Absa as well. Curated by Dineke van der Walt, the bank was happy to connect its brand with some highly disrespectful treatments of iconic art from the colonial past. For one exhibition, Lieve Land II, selected artists were asked to reinterpret certain landscapes from almost a century and longer ago by stalwarts of SA art auctions such as WH Coetzer and Erich Seib. 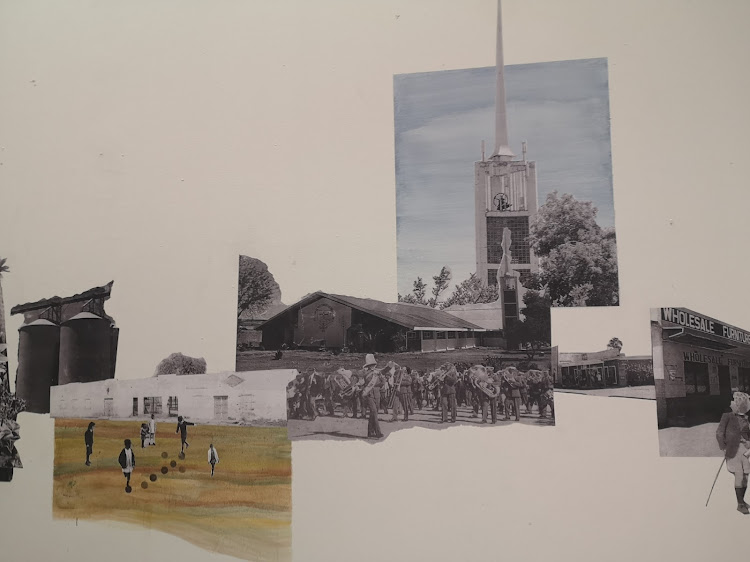 Collages produced by Oudtshoorn residents from archives of the CP Nel museum and the KKNK, and their own family albums. Picture: HANS PIENAAR

As for headcount, I did not do so myself, but would not be surprised if a PIC board member found that the black artists outnumbered the others (it was not always clear from the names what race they were, but one could have an audit done). Part of transformation would also be to insert the lives of the formerly marginalised, and still marginalised, into public discourse. PIC board members might discover much to chew on over their Karoo lamb shanks in the stunning felt collages of the Mapula embroidery project from Winterveld.

Covid-19 has exposed the abyss between the experiences of state power among especially the rural poor, and the multiracial elites of the suburbs. The works in the project collectively act like a Bayeux tapestry that city-bound journalists might study extensively to understand how the majority of SA’s citizens felt about the pandemic. Menacing soldiers and policemen appear in just about every piece, as do food parcels and scenes of hunger and want. Defiance is expressed in the words: “I farm with not enough water.”

This exhibition talks with others, especially Mary Sibande’s masterpieces Cry Havoc and Amidst Chaos, There Is Opportunity, exhibited for the first time together. And oh, headcount ... Sibande was the festival artist and those two installations must have cost Absa a pretty penny to bring to Oudtshoorn.

Theart is upbeat about the future, as he would be expected to be. But beyond just surviving for another year, he sees an explosion of culture on the horizon. He points to the mother of all arts festivals, the Edinburgh Festival, which was started in 1946 expressly to help the British salve their war wounds. He believes South Africans will rediscover a passion for the arts, in final deliverance from these trying years.

Whatever happens, the KKNK is sure to lead the way with its own board now having just one white person, or that’s what it looks like, anyway.

Homegrown fiction that unfolds the ways of being South African

Homegrown fiction that unfolds the ways of being South African