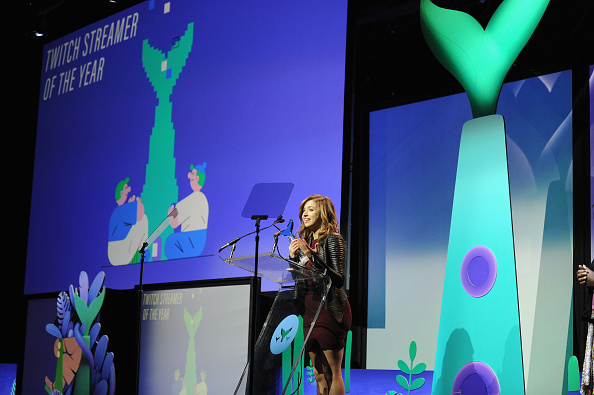 Imane Anys, aka Pokimane, accepts the award for Twitch streamer of the year during the 10th annual Shorty awards in 2018. Picture: Craig Barrit/Getty Images

Portland — During a recent livestream, Maya Higa, 22, ate guacamole and chips while bantering with two of her housemates as they cooked quesadillas.

Over the next 90 minutes, Higa grilled some vegetables and consulted on which pan ought to be used for frying. At one point, she provided her online viewers with an update on her young pet emu. “Stompy is good,” said Higa. “I had her on stream yesterday.”

She wasn’t sure, she explained to one of her kitchen buddies, how much Stompy now weighed. But the lovable emu was definitely growing fast.

The same could be said of Higa’s livestreaming audience.  In February, Higa burst into the top 200 most popular creators on Twitch. She now has 420,000 subscribers on the livestreaming site owned by Amazon.com, making her something of an anomaly in an industry known for male streamers playing video games and, to a lesser extent, female streamers nicknamed “hot-tub girls”, who woo Twitch viewers by wearing skimpy swimwear and lounging in bathtubs.

Higa, by contrast, is part of a new wave of female streamers who are gaining prominence on Twitch and elsewhere in the industry while staying well clear of the jacuzzi scene.

Recently, YouTube creator Rachel “Valkyrae” Hofstetter became the co-owner of 100 Thieves, an esports gaming organisation and brand. In April, there were eight women in the top 200 streamers on Twitch up from just three a year earlier, according to StreamElements, a company that provides video tools for streamers and which represents Higa.

Game on: The next big brand opportunity to embrace

The question for brands isn’t whether or not to get involved in the gaming space, but rather what is the best way in
News & Insights
2 months ago

The number of  top female streamers is growing now, in part, due to changing preferences on the platform. During the third quarter of last year, a relatively new genre of  livestreaming videos known as “just chatting” — essentially live video diaries — eclipsed gaming-related content to become the most popular category on Twitch. In the first quarter of 2021, “just chatting” videos accounted for 12% of all content watched on Twitch, according to tracker Streamlabs.

Imane Anys, 24, who goes by the nickname Pokimane, has 7.7-million followers on Twitch. She typically splits her performance time between “just chatting” videos and playing games like Valorant. Twin sisters Alexandra and Andrea Botez, aka BotezLive, have amassed 791,000 followers on Twitch, teaching and playing chess.

“You see more games at the top of Twitch that rely less on competitive value and more on the entertainment value of social dynamics,” says Doron Nir, CEO of StreamElements. “What propels them to the top is the exact same thing that propels male streamers to the top — they are very, very entertaining.”

When you live where you work, the lines get blurred very easily, and it’s hard to take proper breaks because there’s always something going on in person.

The growing popularity of group games such as Among Us has allowed streamers to share their fan bases, says Hana Tjia of United Talent Agency, which represents several top female streamers, including Pokimane, Valkyrae and Leslie Fu, aka Fuslie. “They uplift one another,” says Tjia.

Moving into a group house full of fellow Twitch performers has been another winning strategy for some female streamers, including Higa. For years, streaming houses only invited gamers. But lately, “just chatting” streamers have joined in.

Higa credits her rise up the rankings in the past year to moving into her boyfriend’s house in Texas. The house is home to six streamers in addition to Higa’s pet falcon and emu. “It is kind of like reality TV,” says Higa.

The life of a female streamer does have its drawbacks. “The negative side of all of it, of course, there’s harassment,” Higa says. “People get banned through our channels all the time. If you go through my ban appeals, it’s just disgusting. ‘Take your shirt off.’ It’s a bit of a problem, but overwhelmingly positive.”

It’s also easy to get burnt out when living and working in a streamer house. About a year ago, Anys moved out of the Offline TV streaming house to try to achieve a better work-life balance. She now shares a house with three fellow female streamers, but their interactions are private and not being shared with viewers. “When you live where you work, the lines get blurred very easily, and it’s hard to take proper breaks because there’s always something going on in person,” says Anys.

Now, it’s the brands that are hoping to move in. These days, lots of advertisers — pitching everything from food-delivery services to phone plans — are looking to cozy up to female streamers.

“Ad agencies generally pitch me as pretty brand friendly,” says Higa. “The only thing I need to watch out for is swearing.”

In a world where content is king, cinephiles like Martin Scorsese are fighting an uphill battle — but it’s not just black and white
Life
1 month ago
Next Article