Wrapped in a thick coat, draped in a fake flowery garland and sipping a cocktail in a beach-style bar on a wintry lunchtime in Melville, Joburg, felt incongruous. One of the city’s oldest suburbs is undergoing (another?) facelift and the Anti-Social Club and Tiny Tiki Bar on a busy corner are a continuation of the recent gentrification of the area.

The thing about Melville is, love or loathe it, it’s irrepressible, it bounces back like a cheeky child that never fails to surprise, both good and bad.

Tiki means one of two things: it’s a reference to wood or stone carvings typical of the South Pacific islands or a place that imitates a South Pacific bar. Think beach, loud flowery shirts, gauche brightly coloured decorations, pretty suntanned boys and girls and rum, lots of it.

“I’ve wanted to create a Trader Dick’s [a famous tiki bar that opened in the US in 1956 and where Marilyn Monroe is said to have been a regular] since I was 19 years old,” said Alex Szabo, one of three partners in Tiny Tiki. 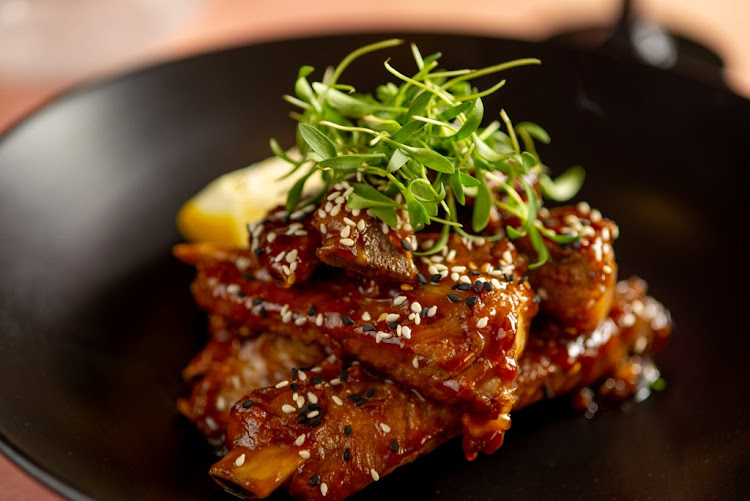 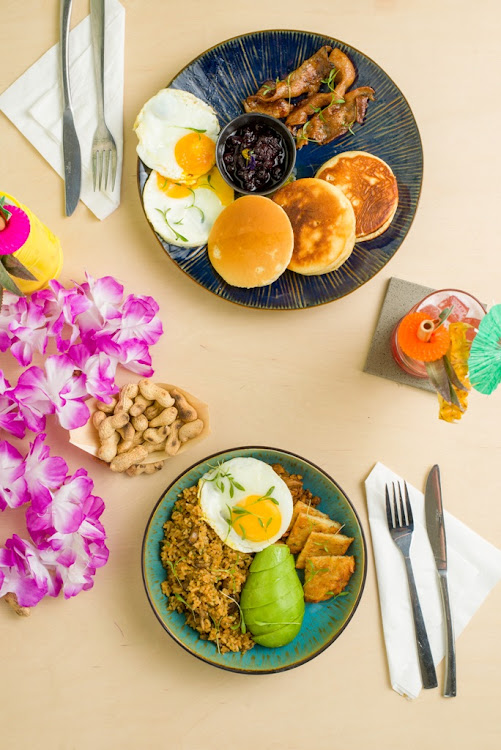 “At Trader Dick’s the owner’s secrets were his biggest drawcard, surprise rum-based cocktails made with secret flavour and syrup combinations.”

Tiki cocktails are traditionally served in brightly coloured Tiki mugs, which you’ll find here too, a collection of just 30, Szabo’s pride and joy.

Here cocktail mixes aren’t state secrets, rather enticing descriptions on a menu — Mai Tai (a combination of light and dark rum), Zombie, Dark & Stormy, Bahama Mama and Rum Swizzle — but if you prefer a surprise, the team of young and enthusiastic bartenders-in-training are up to the challenge and dying to add their signature.

What to eat? In the adjoining eatery, the Anti-Social part that’s very social, you can nibble on typical bar items, chicken wings and other snack-type food. The ribs were really good and not covered in that marinade.

If that leaves you cold, try the all-day Brinner — a breakfast plate featuring their famous bacon, which is damn good, two sunnyside-ups, a stack of sweet pancakes and a blueberry confit.

They’ve been open for a month and word is they’ve been persuaded to add a selection of vegetarian items to the menu.

The Anti-Social Club and Tiny Tiki Bar is located on the corner of 3rd Avenue and 7th Street in Melville.
Image: SUPPLIED

“I have a thing about bacon, that’s why we strive to serve the best, real thick bacon. My Hungarian grandfather ran a pizza restaurant on the West Rand and I remember eating his bacon and banana pizza when I was about four or five years old.”

“My favourite tipple? An Old Fashioned made our way with a bourbon with honey flavours and caramel notes, maple syrup and topped off with a slice of our famous maple bacon.”

“It’s an anti Anti-Social Club where we hope to get people engaging with each other again.”

Eatery offers fresh cocktails and a slice of African cuisine in between Sandton’s concrete, writes Sanet Oberholzer
Life
9 months ago

1.
Q&A: How far off am I financially to retire ...
Life
2.
Lessons from the South Pole: keep your joys simple
Life
3.
ANDREA BURGENER: Let’s hope we are all more ...
Life

An ode to porridge

1.
Q&A: How far off am I financially to retire ...
Life
2.
Lessons from the South Pole: keep your joys simple
Life
3.
ANDREA BURGENER: Let’s hope we are all more ...
Life

An ode to porridge