The cloud-computing deal has been legally contested for years, with some claiming Donald Trump, famous for his anti-Amazon bias, affecting who got the contract 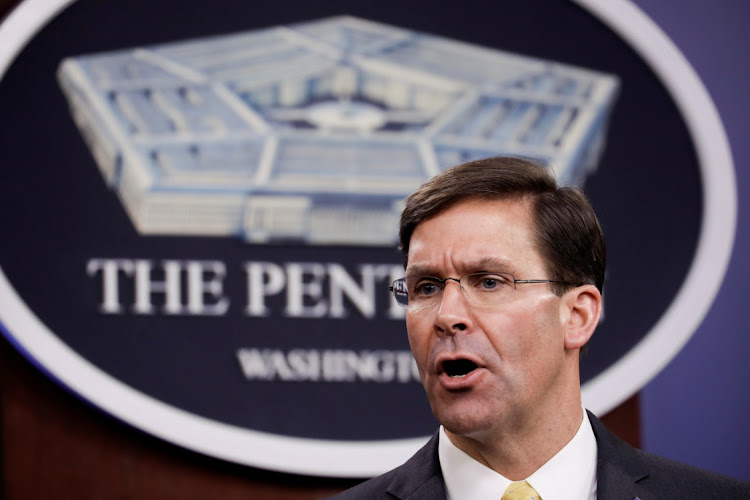 Washington — Microsoft is in danger of losing a contract to provide $10bn of cloud computing services to the Pentagon, a deal the government has threatened to scrap altogether after years of legal squabbling.

The US defence department said it will reconsider the controversial procurement if a federal judge declines to dismiss Amazon’s allegations that former president Donald Trump’s meddling cost the company the winner-take-all contract. That means the fate of a cloud project the Pentagon considers critical for its war fighters may rest in the hands of the US court of federal claims, which could soon issue a ruling on Amazon’s accusations.

The Pentagon said in February it would take too long to prove in court that its decision to award Microsoft the lucrative cloud deal was not unduly influenced by the White House. If the judge allows Amazon to argue its bias claims in the case, the government may decide to stop fighting.

“If the court denies the government’s motion we will most likely be facing an even longer litigation process,” Pentagon spokesperson John Kirby said at a press conference late in February. “The defence department chief information officer will reassess the strategy.”

The warning is another twist in a contentious process that has involved years of legal challenges, behind-the-scenes lobbying and a PR campaign by technology rivals to unseat Amazon as the original front-runner for the cloud contract when it was unveiled in 2018. More than a year after Microsoft was named the winner, the defense department is still fighting to execute the ioint enterprise defence infrastructure cloud — or Jedi, an acronym intended to evoke Star Wars imagery — to serve as the primary data repository for military services worldwide.

The deal is worth $10bn over a decade.

There are signs the Pentagon is already moving on. The defense department is talking up its other cloud contracts beyond Jedi, and some of the programme’s biggest cheerleaders have left the department, leaving new leaders to make decisions on a procurement they inherited from the Trump administration. Even Microsoft executives are trumpeting all the other work the company plans to keep doing for the defence department, in the event that its image-boosting Jedi deal goes south.

“We know that very clearly” the defence department needs the Jedi project “to support its mission”, Tom Keane, vice-president of Microsoft Azure, said in an interview. “But we are not waiting for a single vehicle, we are using every single vehicle we can” to partner with the Pentagon, he said.

The defence department has stressed it has 13 other cloud projects including partnerships with Oracle, Amazon, General Dynamics Information Technology and even Microsoft. The software giant expanded Pentagon employees’ access to its video and chat tools during the pandemic last year through Microsoft Teams.

Also in 2020, the CIA hired multiple companies to offer cloud services to the intelligence community, a collection of national security units spanning several agencies including the Pentagon, eight years after the agency awarded a $600m cloud deal to Amazon.

Meanwhile, the most visible champions of the Jedi project’s single-source approach have exited the defence department. Chris Lynch, the former director of the defence digital service, which designed the project, left to start a new company selling technology to the government. Dana Deasy, the Pentagon’s former chief information officer, was replaced by John Sherman, who previously served as chief information officer for the intelligence community at a time when it decided to fully embrace multiple vendors.

From the start, companies such as Oracle and IBM, which were eliminated early from the contest, pressured the Pentagon to choose several vendors for a contract they said was clearly tailor-made for Amazon. Amazon Web Services, the company’s cloud unit, was widely seen as the front-runner for the contract because it won the CIA deal and had earned the highest levels of federal security authorisations.

When the contract was announced, the state of the art for corporate cloud set-ups was already moving away from relying on a single vendor for everything — many customers were opting for multiple cloud vendors and selecting the best option for specific tasks. The Jedi contract seemed to represent an earlier time in cloud migrations, when there were fewer choices and the vast majority of deals went to Amazon.

The defence department said at the time that using multiple cloud providers would increase the complexity of the project.

After Microsoft’s unexpected win, Amazon filed a lawsuit arguing that its rivals’ private manoeuvring and Trump’s well-known animus for Amazon founder Jeff Bezos — documented in tweets and public statements throughout his campaign and presidency — made it difficult for the Pentagon to choose the winner impartially.

As part of its complaint, Amazon has asked the judge for permission to question Trump, former defence secretaries James Mattis and Mark Esper, and other individuals involved in the selection process. Federal claims judge Patricia Campbell-Smith has yet to rule on whether to dismiss Amazon’s bias allegations or grant its request for more discovery, but that decision could come at any time.

To press its claim, Amazon chronicled a laundry list of actions showing the White House’s bias against Amazon. The company cited a book by Guy Snodgrass, a speechwriter to Mattis, which alleges that in the summer of 2018, Trump told Mattis to “screw Amazon” and lock it out of the bid. Mattis didn’t do what Trump asked, Snodgrass wrote.

The lawsuit also mentions Trump’s comments during a press conference in July 2019, when he openly questioned whether the Jedi contract was being competitively bid. Later that month, Trump tweeted television coverage that characterised the Jedi contract as a “Bezos bailout”, the lawsuit says.

The Pentagon and Microsoft, an intervening defendant in the case, argue that Amazon should have raised its objections about political interference earlier. The US also says Amazon’s claims are undercut by a report from the defence department’s inspector-general, which found no evidence that the award decision was affected by Trump. The Pentagon’s watchdog also said its investigation into the contract was limited by the White House.

Even if the court tosses out Amazon’s political bias allegations, it will still take several months to litigate the company’s other complaints about the Pentagon’s evaluation and award process

While Microsoft may make up any lost revenue through other federal deals, Jedi’s dissolution would still hurt, mainly by taking away one of the clearest validations yet that the company is catching up to Amazon in cloud services. In the wake of the contract’s announcement, Microsoft analysts touted it as possibly “the largest cloud contract award in history” and a “great win” that “validates Azure as a leading hyper-scale cloud and signals that Azure continues to gain ground on AWS”.

“I’m hard-pressed to imagine a scenario in which the court — after all of these months — simply says ‘Never mind, sorry for the inconvenience and delay’,” to the defence department, he said.

The Amazon case came after the defence department faced down many other legal hurdles to its implementation of Jedi. So far, the Pentagon has fought two challenges with the government accountability office, two lawsuits in federal court, and an investigation by the inspector-general’s office. Though it has prevailed up to now, the legal challenges have forced the Pentagon to delay executing the project by more than two years after its planned start date.

“It’s not just that it’s been delayed so long but it’s been delayed long enough that the world is changing,” said Stan Soloway, a deputy undersecretary of defence under president Bill Clinton and now president of Celero Strategies, a Washington-area consulting firm. “The question becomes do you really want or need a single-cloud solution?”

Even if the court tosses out Amazon’s political bias allegations, it will still take several months to litigate the company’s other complaints about the Pentagon’s evaluation and award process. Win or lose the case, the defence department says it will get the cloud-computing services it needs.

“The department continues to have an urgent, unmet requirement,” the Pentagon said. “This requirement transcends any one procurement, and we will be prepared to ensure it is met one way or another.”

Joe Biden has said he looks forward to ‘leading a bold space programme ... to expand our exploration and scientific frontiers’
World
5 months ago

Trump launches a Twitter tirade against Amazon for ‘destroying jobs’

The online giant also comes under attack for damaging other retailers by not paying tax — a criticism that is not backed up by any specific ...
World
3 years ago

Amazon says it will evaluate its options after Microsoft wins the US defence department's Joint Enterprise Defence Infrastructure Cloud (Jedi) ...
Companies
1 year ago
Next Article

Microsoft ‘on track’ for Pentagon contract

Microsoft ‘on track’ for Pentagon contract