China’s banking regulator has vowed to escalate its fintech clampdown 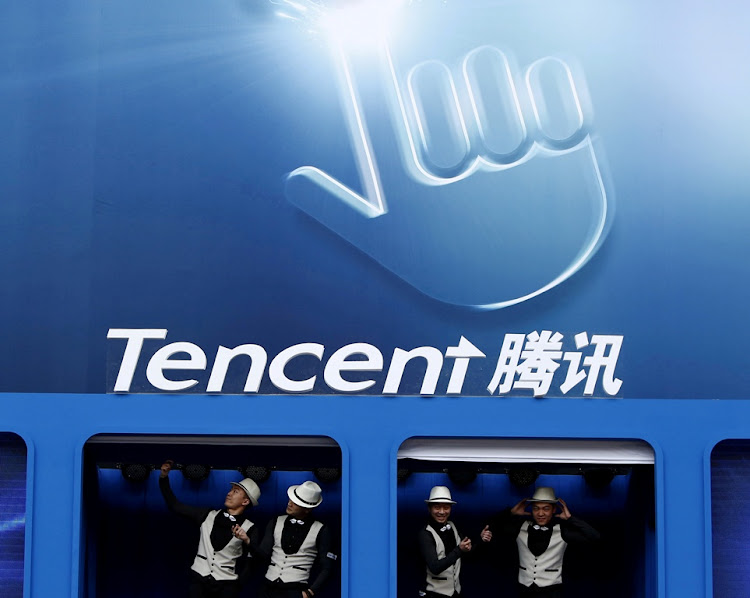 New York — Tencent joined Alibaba and much of China’s internet sector in a $290bn sell-off after Beijing signalled its strongest intentions yet to rein in big tech. Yet the social media and gaming company is in some ways better shielded than its peers from any potential crackdown.

Executives unfurling earnings on Thursday will seek to reinforce perceptions Tencent is not in the same boat as fintech company Ant, the Alibaba affiliate forced to call off what would have been the world’s largest initial public offering (IPO) after Beijing tightened its control of online lending.

Citigroup and JPMorgan were among brokerages that recommended investors buy Tencent during the sell-off.

For years, Tencent had been the more sedate runner-up to Jack Ma’s splashy Ant in the burgeoning field of internet finance, focusing more on bread-and-butter mobile payments via WeChat while ensuring enough capital to back up a smaller consumer loan book.

In its main business of gaming, the company endured a 2018 crackdown that sent the world’s largest mobile games empire into a tailspin and has since put stricter measures in place to curb addiction among youths. And while WeChat is the go-to daily app for a billion-plus Chinese, regulators may take into account how the company has yet to fully monetise the service’s potential for e-commerce, finance and other adjacent businesses, according to analysts.

“Tencent will be better off, because its core businesses from social advertising to video games don’t have much to do with the real economy and people’s livelihood, compared to e-commerce and financial platforms,” said Ke Yan, a Singapore-based analyst with DZT Research.

China’s antitrust watchdog on Tuesday laid out guidelines to root out monopolistic practices among local tech leaders, banning their online platforms from colluding on sharing sensitive consumer data, forming alliances that squeeze out smaller rivals and subsidising services at below cost to eliminate competitors.

While the proposed new rules are not targeting e-commerce operators exclusively, anticompetitive behaviour such as forced exclusivity and biased algorithm-based pricing are more common in that arena.

Shares of Tencent gained 5.4% in Hong Kong trading on Thursday, snapping back from a two-day 11% loss. Alibaba was up 3%, after having slumped 14% the previous two days as investors scrambled to assess the fallout from China’s attempt to rein in its most powerful private-sector firms.

After years of granting the booming internet sector mostly free rein to grow, Beijing is stepping up oversight of the two internet giants and its peers, as it does with businesses that dominate other parts of the world’s second-largest economy.

On Wednesday, China’s banking regulator also vowed to escalate its fintech clampdown, saying online firms like Ant should be subject to the same supervision and risk management requirements as traditional banks.

Tencent’s fintech business — valued at anywhere from $200bn- $300bn before Ant’s IPO derailment — is the closest competitor to the Alibaba affiliate, though it still lags in some arenas. Together with cloud computing, the company’s fintech and business services segment is its fastest-growing division, making almost $15bn, or a quarter of total revenue, in 2019. The bulk of that is generated from commercial payments facilitated by the WeChat super-app, where 1-billion Chinese schmooze, shop and share cabs.

Also through WeChat, Tencent touts financial services that are similar to Ant’s but on a far smaller scale. That is due in part to a mix of factors, from Ant’s first-mover advantage to its incorporation as a stand-alone company and a better grasp of consumer data via e-commerce transactions.

“Tencent has the luxury to wait and see and let Ant be the trailblazer and learn from their mistakes,” said Bloomberg Intelligence analyst Vey-Sern Ling. “Once Ant has jumped over all the hurdles, it’s not too late for Tencent to follow, because they have the users and the payment system.”

For now, Tencent can still count on its gaming cash cows, while global macro uncertainty and competition with Bytedance may continue to depress advertising. Revenue for Tencent is expected to grow a steady 27% in the September quarter, while analysts on average forecast net income to rise 48% from a year earlier.

It benefited from a resurgence in online services during the Covid-19 pandemic, and has charted a line-up of new titles for the next year to shore up mainstay franchises Peacekeeper Elite and Honour of Kings. In October, Tencent’s Riot Games unit started testing League of Legends’ much anticipated mobile version in Asia.

On top of dominating e-commerce and gaming, Alibaba and Tencent are backers of leaders in other swathes of China’s internet from food-delivering platform Meituan to car-hailing giant Didi Chuxing. They have together invested billions of dollars in hundreds of up-and-coming mobile and internet companies. Tencent is leading a merger of Douyu International with Huya to create a Chinese game-streaming behemoth with a $10bn market value.

That kingmaker status may take a blow from the new antitrust regulations, which now scrutinise M&As by companies that operate a so-called variable interest entity, a vehicle through which virtually every major Chinese internet firm lists overseas.

But beyond the scale of the two companies’ operations and outsize influence in the modern Chinese economy, Tencent has one comparative advantage over its larger rival.

In the lead up to Ant’s IPO halt, Alibaba’s Ma slammed China’s financial rules for stifling innovation, labelling old-guard banks “pawn shops” in a high-profile conference attended by senior Chinese officials. Tencent has no need to worry about similar key-person risks: its own spotlight-shy founder Pony Ma has been a no-show in the public for more than a year due to health reasons, while other executives have avoided ruffling Beijing’s feathers.

“In our various fintech businesses, we position ourselves as a collaborator and enabler of the industry and with other partners, rather than a disrupter in the market,” Tencent president Martin Lau said at the Hong Kong FinTech Week event earlier this month.

In the taped recording made before China unveiled the new rules on online banking, Lau added that the company works closely with regulators and has “strong respect for risk management”.

Prosus critics argue that it must buy companies — but can’t because the stock is cheap. Which suggests a state of protracted limbo, unless and until ...
Opinion
6 months ago
Next Article