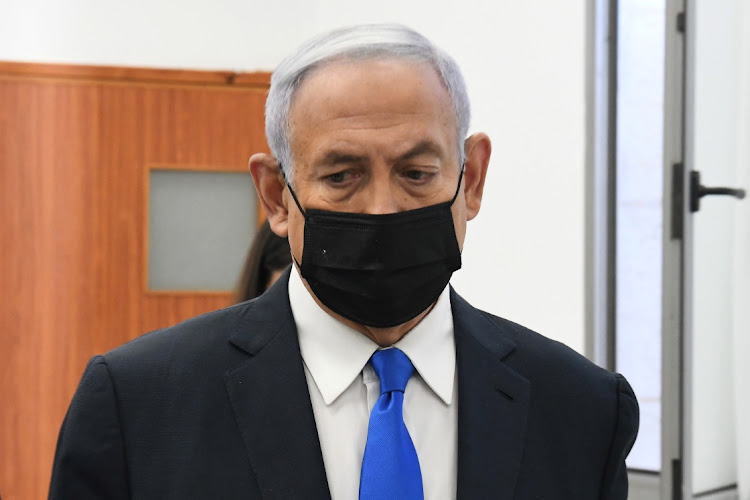 Jerusalem — Israeli Prime Minister Benjamin Netanyahu returned briefly to a Jerusalem courtroom on Monday, to face a tangle of graft charges that have underpinned years of political turmoil and threatened his political survival.

Netanyahu — the country’s first sitting leader to be tried for an alleged crime — made no remarks outside Jerusalem district court and sat inside with his back to cameras, arms crossed over his chest. Asked to respond to the charges, which he has repeatedly denied, the prime minister replied: “I confirm the written answer submitted in my name.”

He did not testify and less than an hour after the hearing formally began, Netanyahu thanked the judge and exited the courtroom, leaving his defence to his attorneys. In deference to social distancing regulations amid an unrelenting coronavirus outbreak, the courtroom was sparsely populated, with partitions separating the judges and the lawyers, and everyone wearing masks.

Prosecutors allege that Israel’s longest-serving leader abused his position to illicitly accept — and at times demand — fine wines and expensive cigars from billionaire friends. As he sought to hold on to power, they claim, he sacrificed the integrity of his office to win favourable media coverage, reshaping the country’s regulatory landscape to benefit one media publisher, and weighing proposed legislation that could have favoured another.

Although Netanyahu has said the court proceedings would not distract him from the business of governing, they are getting under way in earnest as he will be called upon to make weighty decisions. These include how to get the coronavirus-battered economy back on its feet and engage with a new US administration whose policies on Iran and the Palestinians he opposes.

It was the second court appearance for the prime minister, who had just been installed for a fifth term when his trial opened in late May. In the intervening months, his government collapsed, triggering an early election that might help him in the courthouse.

Polls show Netanyahu’s Likud party still emerging the biggest by far, with neither him nor his opponents easily able to form a coalition government. Similarly inconclusive outcomes in the previous three votes have kept the country in political limbo since Netanyahu first brought down the government in December 2018.

Still, even a draw could improve the prime minister’s legal prospects. As long as he is in power — even as a caretaker leader, as he is now — he is in a better position than he would be as an ordinary citizen. And if he wins, he’d be poised to pressure future coalition partners to pass legislation that would shield him from prosecution while in office.

Netanyahu’s defence team asked to put off the next phase of the trial for several months, and the judges said they would consider the request, which would take the trial’s resumption beyond the March 23 election. The hearings will renew with the most explosive of the three cases against him, which includes a bribery charge.

The prime minister contends he’s the target of a cabal of leftists and journalists who despise his nationalist agenda and want to drive him from office with baseless charges. In a video posted on social media on Sunday, he denounced the “fabricated” cases against him and predicted that the “persecution” of Israel’s right-wing will translate into an even bigger victory for his camp on election day.

“Everyone understands that this is a transparent effort to topple a strong, right-wing prime minister and thereby crown a left-wing government,” he said.

SA registers a record number of deaths, farmers protest in India, Donald Trump is impeached again, the US executes the first woman in nearly 70 ...
Life
1 year ago