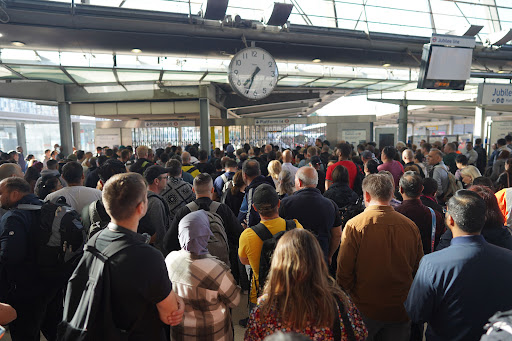 Trouble is brewing behind the bar at the Saint James Tavern in the southern English seaside city of Brighton.

As Britain’s cost-of-living crisis fuels discontent about wages and conditions among workers, bar staff at the pub have taken the unusual step of going on strike, led by their manager, Jake Marvin.

“I don’t think I’d ever thought I’d be this involved … but needs must, I guess,” said Marvin, who along with colleagues recently made his first foray into union membership by joining the United Voices of the World (UVW) union.

They walked out for two days in June and July, but have so far failed to achieve their demands. Marvin and others have been suspended, highlighting the challenges faced by low-paid workers in the private sector, even as interest in unionising grows.

The pub’s tenants said the employees had been suspended for various disciplinary issues, adding that they respected their right to join a union.

Dubbed the “summer of discontent”, a wave of strikes is sweeping Britain as soaring fuel and food prices erode workers’ buying power.

But trade unions hope there could be a silver lining to the inflationary squeeze — helping them regain some of their lost influence as well as membership, which has roughly halved since the “winter of discontent” in the late 1970s.

“There’s going to have to be a settlement in this country for people on pay, and all of the other issues feeding into this cost-of-living crisis,” said Eddie Dempsey, senior assistant general secretary of the Rail, Maritime and Transport Workers (RMT) union.

The RMT is due to hold another 24-hour strike over pay and job protections on Wednesday, after leading Britain’s largest rail strikes for 30 years in June, when inflation hit a 40-year high of 9.4%.

Along with his boss Mick Lynch, Dempsey has won plaudits for media-savvy and upbeat television appearances defending the need for industrial action, though critics point to the economic harm and disruption caused by the walkouts.

“Asking nicely doesn’t work at the best of times, and it’s not going to work in the hardest of times,” Dempsey said, adding that more than 3,000 people had joined the RMT in the past two months.

During June’s rail strikes, there was an eight-fold increase in the number of visits to an online tool that helps workers find a union, said Kevin Rowan, head of organising at the Trades Unions Congress (TUC) federation, which operates the tool.

In other countries too, workers’ interest in collective bargaining appears to be growing.

In the US, industrial action increased in 2021 and some staff at high-profile companies such as Amazon and Starbucks have formed unions, partly reflecting fallout from the Covid-19 pandemic and labour shortages.

“Workers can more easily find an alternative job, so they’re more likely to succeed if they go on strike,” he said, adding that abrupt layoffs and health issues during the pandemic have fuelled anger among many workers.

But besides simply organising strikes, unions will have to show palpable results in improving workers’ pay and conditions to lock in interest in unionising, said Rowan.

“Success breeds success, and there certainly is an air of confidence among our trade unions,” he said, pointing to recent private sector wins, such as a wage hike for workers at chocolate company Cadbury worth 17.5% over two years.

Still, only 12.8% of employees in Britain’s private sector belonged to unions in 2021, compared with 50.1% in the public sector, meaning the vast majority of workers lack the power to bargain.

The UVW union, which has just 5,000 members including the Saint James Tavern staff, was founded in 2014 in response to a perceived gap in the union movement for workers in minimum wage and insecure jobs, many of whom are migrants.

“The workers that really need unions the most are the ones that are least represented by unions,” said UVW general secretary Petros Elia, whose members include cleaners, security guards, delivery drivers and others in precarious jobs. “These are people the union movement has kept invisible, in a way,” Elia said. “It’s a huge pool of workers out there that the union movement should be trying to speak to.”

Union membership and the number of workers covered by collective bargaining agreements — meaning those affected by union negotiations with employers, which can include non-member employees — differs hugely around the world.

In countries including Germany and the Nordic states, the majority of workers are subject to bargaining agreements to improve their wages, which academics have linked to lower levels of economic inequality.

In Britain and the US, meanwhile, union power has decreased, with some pointing to the decline of traditional industries like mining.

“It’s been difficult for unions to make inroads into newer sectors of the economy and the services sector,” said Tony Dobbins, professor of work and employment relations at Birmingham Business School.

Another issue facing unions is that members are getting older, presenting a problem even in countries with stronger labour movements.

According to the European Trade Union Confederation, the percentage of people under 25 joining a union has fallen significantly, contributing to declining trade union density in most European countries.

In places with weak or non-existent unions, analysts also point out that much of the potential for growth is outside their control. The laws surrounding unions affect their ability to organise.

According to the International Trade Union Confederation’s Global Rights Index, four in five countries block collective bargaining, and more than three-quarters of countries deny workers the right to establish and join a union.

While Britain grants those rights, its laws have become stricter, and the government recently set out plans to allow companies to temporarily hire agency workers during strikes.

“Unions now have to jump through more legal hoops to achieve the change they want on behalf of their members,” said Neil Todd, a trade union expert and partner at law firm Thompson Solicitors.

“Currently, the whole system leans far too much towards protecting employers over protecting workers and this is, unfortunately, worsening,” he said.

That means talk of a full-blown union revival is premature unless there are membership increases over the longer term, labour analysts say.

But on the heels of Covid-19’s hardships and an inflationary surge, union leaders believe momentum is on their side.

“We hope we’ll set the example and other people follow the lead,” said Dempsey. “I can only see this spreading.”

Workers to stage another one-day strike as part of a dispute over pay, jobs and work conditions
World
3 weeks ago
Next Article