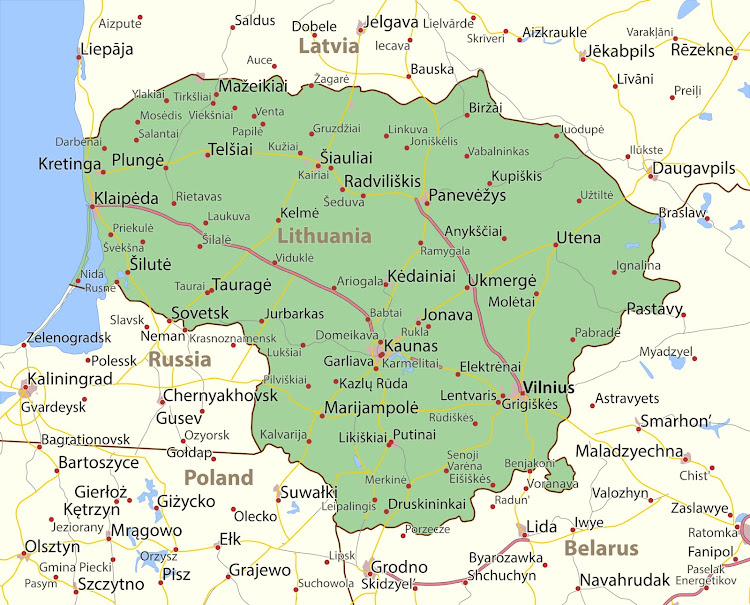 A map of Lithuania showing Kaliningrad to the west. Picture: 123RF/mschmeling

London — Russia warned Nato member Lithuania on Monday that unless the transit of goods to Russia’s Kaliningrad exclave on the Baltic Sea was swiftly restored, Moscow would take undisclosed measures to defend its national interests.

With relations at a half-century low over Russia’s February 24 invasion of Ukraine, Vilnius banned the transit of goods sanctioned by the EU through Lithuanian territory to and from the exclave, citing EU sanction rules.

Russia’s foreign ministry summoned Lithuania’s top envoy in Moscow to deliver a protest while the Kremlin said the situation was beyond serious. “The situation is more than serious,” Kremlin spokesperson Dmitry Peskov told reporters. “This decision is really unprecedented. It’s a violation of everything.”

“If cargo transit between the Kaliningrad region and the rest of the Russian Federation via Lithuania is not fully restored in the near future, then Russia reserves the right to take actions to protect its national interests,” it said.

Kaliningrad, formerly the port of Koenigsberg, capital of East Prussia, was captured from Nazi Germany by the Red Army in April 1945 and ceded to the Soviet Union after World War 2. It is sandwiched between Nato members Poland and Lithuania.

Lithuania said it was merely implementing EU sanctions, part of a swathe of measures intended to punish President Vladimir Putin for the invasion of Ukraine.

Lithuania’s state-owned railway informed clients that from June 17 sanctioned goods such as steel and iron would not be permitted to cross Lithuania, Landsbergis said.

Farmers stopped buying when prices shot up, but they have dropped now
News
2 weeks ago
Next Article