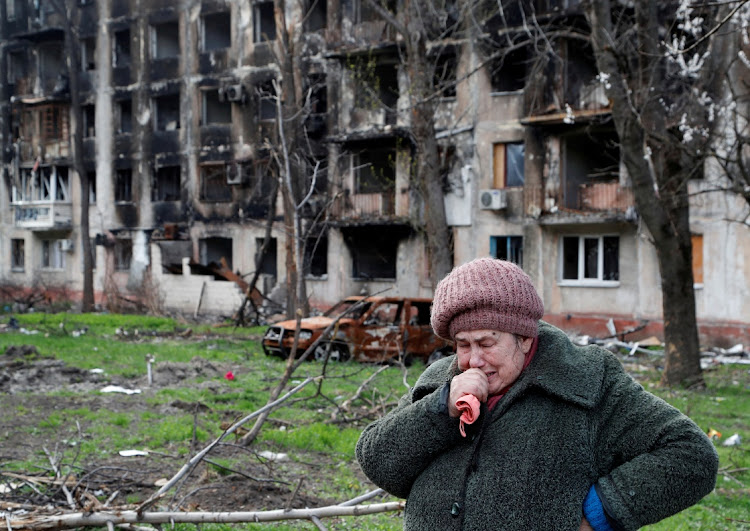 Mariupol resident Tamara in front of an apartment building destroyed in fighting in the southern Ukraine port city on April 19 2022. Picture: REUTERS/ALEXANDER ERMOCHENKO

A Ukrainian marine commander in the besieged port city of Mariupol said his troops may be able to hold out for only a few hours longer as Ukraine tried to evacuate 6,000 women, children and elderly people on Wednesday.

Mariupol mayor Vadym Boichenko urged civilians to leave, saying 90 buses were waiting to head into what is left of the devastated city under a preliminary agreement with Russia — the first in weeks — on establishing a safe corridor.

This is our appeal to the world. It may be our last. We may have only a few days or hours left

“This is our appeal to the world. It may be our last. We may have only a few days or hours left,” he said, dressed in a camouflage jacket. “The enemy units are dozens of times larger than ours, they have dominance in the air, in artillery, in ground troops, in equipment and in tanks.”

Reuters could not independently verify the video posted on the Telegram messaging app.

The last fighters are holed up at a vast steel works in Mariupol and have been issued an ultimatum by Russia to surrender.

Mayor Boichenko, who has left Mariupol, said about 100,000 civilians remained in the city on the Sea of Azov and tens of thousands had been killed there since Russia invaded Ukraine on February 24. The numbers could not be verified by Reuters.

Russia denies intentionally targeting civilians. There was no immediate word from Moscow on whether a humanitarian corridor would be established out of Mariupol.

Civilians have been able to escape to other parts of Ukraine only in their own vehicles, while tens of thousands have been bussed to Russia in what Moscow calls humanitarian evacuation and Kyiv calls illegal forced deportation.

Both Boichenko and Ukrainian Deputy Prime Minister Iryna Vereshchuk underlined that the agreement on establishing a humanitarian corridor into and out of Mariupol was only a preliminary arrangement.

Previous agreements have collapsed, with each side blaming the other. An attempt by the International Committee of the Red Cross (ICRC) to evacuate civilians also failed.

“Given the catastrophic humanitarian situation in Mariupol, this is where we will focus our efforts today,” Vereshchuk wrote on Facebook. “Given the very difficult security situation, changes may occur during the corridor action.”

Moscow says its “special military operation” is aimed at demilitarising Ukraine and rooting out dangerous nationalists. Kyiv and the West dismiss Russia's stance as an unjustified pretext for an invasion.

Mariupol, home to more than 400,000 people before the war, is an important port for industrial and agricultural exports and the site of some of Ukraine's biggest metals plants.

Its capture would give Russia full control of the Sea of Azov coast, and a secure overland bridge linking mainland Russia and pro-Russian separatist territory in the east with the Crimea peninsula that Moscow seized and annexed in 2014.

Capturing Mariupol would be a strategic prize for Russia, linking territory held by pro-Russian separatists in the east with the Crimea region
World
4 months ago