After the Russian strike on a military base near Lviv, some people from western Ukraine have now joined the refugee flow across the border 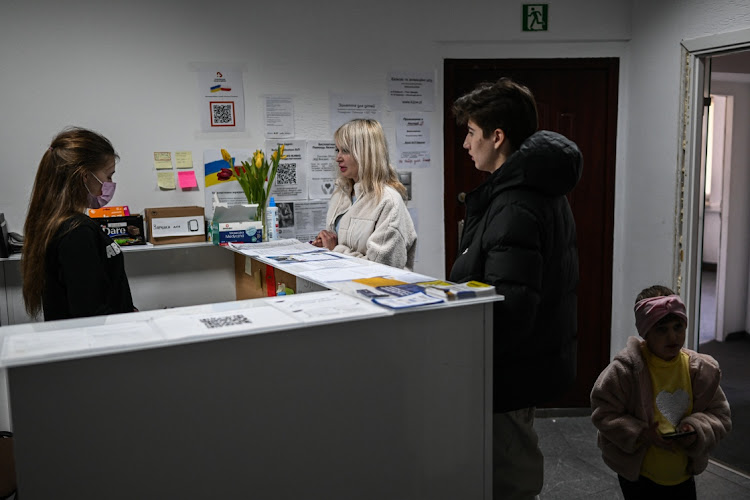 A woman who fled the war in Ukraine speaks to a receptionist in an art school that has been converted for a temporary shelter on March 15 2022 in Krakow, Poland. Picture: GETTY IMAGES/OMAR MARQUES

About 2.95-million people have so far left Ukraine, data from the UN High Commissioner for Refugees (UNHCR) showed. It is basing its aid plans on 4-million refugees but has said the figure is likely to increase.

After Sunday’s Russian strike on the Yavoriv military base near Lviv, some people from western Ukraine have now joined the refugee flow across the border.

“Everybody considered west Ukraine to be quite safe until they started striking Lviv,” said Zhanna, a mother from Kharkiv, who was heading to Poland to reunite with her godmother who left Ukraine a few days earlier.

“We left Kharkiv for Kirovohrad,” she said at the train station of Przemysl, the nearest town to Poland’s busiest border crossing with Ukraine. “We wanted to stay there. We did not want to go abroad.”

In Romania, Ukrainian women and children, some clutching teddy bears, continued to stream through the Siret border crossing where temperatures dropped to -2°C overnight.

Pulling suitcases and carrying backpacks, they were met by Romanian firefighters and volunteers, who carried their belongings to buses transporting them onwards.

Further south at Isaccea, a busy border crossing on the Danube River, Tanya, from Mykolaiv in southern Ukraine, said she was fleeing to save her child’s life.

“On the way here I cried because I love my country. I want to live in Ukraine but I can’t. Because they are destroying everything now,” she said, fighting back tears

Russia denies targeting civilians, describing its actions as a “special military operation” to demilitarise and “denazify” Ukraine. Western allies and Ukraine call this a baseless pretext for Russia’s invasion of a democratic country of 44-million.

In Moldova, one of Europe’s poorest countries, some refugees were returning home to Ukraine, either to fetch more belongings or hoping to return for good.

Liudmila, who did not give her last name, was going back to Ukraine to fetch school supplies for her children in Chisinau, Moldova’s capital.

“On Monday they began learning online and that’s why I should take some things for them, books, for writing,” she said.

The UNHCR says those fleeing early in the conflict mostly had resources and contacts outside Ukraine, but now many of the refugees had left in a hurry and were more vulnerable.

“We see a lot of elderly people and a lot of people with disabilities, really people who were expecting and hoping until the last moment that the situation would change,” said Tatiana Chabac, an aid worker with the UNHCR.

Another woman, who did not give her name, was going back to Odesa with her toddler. “We want to go home,” she said as she crossed the border into Ukraine.

Direct trade with Russia and Ukraine is small, but global prices of key products are rising, writes Neva Makgetla
Opinion
5 months ago

Apartment block shelled in the capital, but both Russia and Ukraine reported rare progress on talks at the weekend
World
5 months ago
Next Article