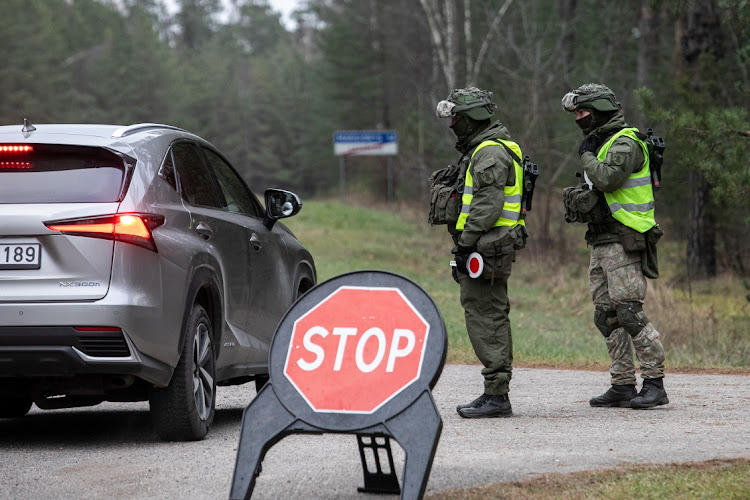 The army patrol in Latezeris, Lithuania, on November 15 2021. Lithuania has called a state of emergency following the arrival of hundreds of migrants onto EU borders after arriving from the Middle East to Belarus. Picture: GETTY IMAGES/PAULIUS PELECKIS

Mickunai — Five volunteers in a garage near the Lithuanian capital are packing matches, hand and feet warmers, a cup and a spoon into plastic bags to be handed out to migrants that their country will forcibly move back to Belarus.

“It will not overturn the plight of the migrants, but this is the best that I can do. So I try to help,” said Domantas Zekas, working among messy piles of boxes of food, clothes and other supplies which are packed by whoever turns up on the day.

Last week, about 6,000 packages of food — tinned beef, beans and corn, instant noodles and cookies — were assembled by volunteers working in shifts.

The food is provided by organisations such as Red Cross, the International Organization for Migration, and Caritas and packed in co-operation with Lithuania’s border guards, who provided the garage and give the packs to guards patrolling the frontier.

Those guards welcome the chance to distribute them to people returning to cold and hunger on the Belarusian side.

“The migrants are really happy, they gladly take the charity, say ‘thank you good Lithuanians’, and applaud. It motivates us,” said Darius Skarnulis, head of border guards in Vilnius region.

More than 4,000 migrants from the Middle East and Africa have entered Lithuania this year and more turn up at the border all the time after flying into Belarus in what the EU says is a crisis orchestrated by its government in retaliation for EU sanctions. Belarus says the allegation is absurd.

Since early August, Lithuania has forced about 7,000 people back across the border which runs along sparsely populated woods and marshes; activists say this sometimes leaves vulnerable people in a desperate situation.

Just over 160 migrants have been allowed in on humanitarian grounds, which Lithuania defines as “real danger to health and life”. Decisions on granting access are left to officers on patrol, working on vague guidelines with no involvement from humanitarian or children’s rights organisations, lawmaker Tomas Tomilinas said.

An Iraqi family with four children under the age of 10 was detained in Lithuania near Belarus on November 6 in sleet and sent back the following morning, Tomilinas said.

Border guards spokesperson Rokas Pukinskas said people were fed and allowed to get warm and could apply to remain if they could back up asylum claims. But he said they could not enter just because they had children with them.

The volunteers packing the aid up in the garage did not discuss what happens in the forests.

“We do not participate in the pushbacks, and we did not create this situation. We can at least take care of the humanitarian side of it, so that people can survive,” said Caritas co-ordinator Vaida Martuseviciute.

If Putin and Lukashenko want to escalate the conflict, doing so would be easy
Opinion
2 weeks ago

Belarus denounces accusations it is driving a migrant crisis that has left up to 4,000 people stranded in freezing forests on its border with Poland
World
2 weeks ago
Next Article