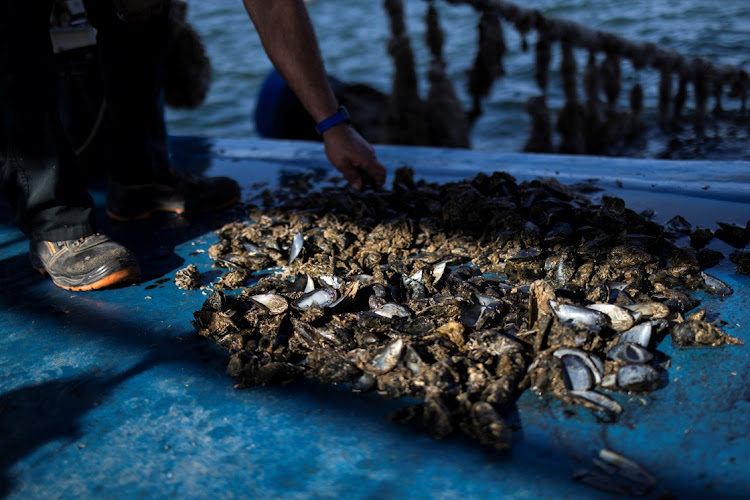 Mussel farmer Stefanos Sougioutzis holds destroyed mussels due to high temperatures this summer, on his boat in the Thermaic Gulf, Greece on September 15 2021. Picture: REUTERS/ALKIS KONSTANTINIDIS

Thermaic Gulf — Fisherman Stefanos Sougioultzis cracks open the mussels he cultivated in Greece’s Aegean Sea only to find scores of empty shells. After a summer of scorching heat and warming waters, it was “as if they boiled in their own environment”, he says.

“Twenty-five years in mussel farming, we did not expect - we could not imagine - this,” Sougioultzis said aboard his boat in the Thermaic Gulf near Thessaloniki in northern Greece, the country’s main mussel producing region.

Local authorities say about 50% of this year’s production was destroyed as Greece faced its worst heatwave in decades. About 90% of the baby mussel seed that would grow into next year's production also died.

“When people were saying ‘what a nice warm sea we have’, we were living through a nightmare,” Sougioultzis said.

He pulled from the sea clusters of mussels grown over the past 18 months, covered in a thick white mass one scientist identified as a kind of tube worm, a marine worm that clings onto the mussels in high temperatures and gradually kills them.

“It is the first time I witness such a phenomenon,” said Konstantinos Vervitis, president of the local shellfishing association Poseidon, which represents about 90 mussel farming families, about a third of the region’s producers.

“Any damage we had in the past was manageable. This year it looks like climate change is here. The climate crisis is here,” he said.

Temperatures rose above 45°C in Greece in July and sea temperatures hit 28°C.

“If this situation continues and it continues to worsen, then we will see extreme phenomena in the future,” he said. “We must constantly be on alert.”

Together with Italy, France and Spain, Greece is one of the world’s main producers of the Mediterranean mussel, known for its high meat content, and it exports most of its production.

Greece produced about 23,000 tonnes of farmed mussels in 2020, official data shows, but suffered a hit as the coronavirus pandemic hurt tourism and demand from its main markets Italy and Spain, said Kostas Gioutikas, a regional deputy governor in charge of growth and environment.

“The gulf is in danger of having no mussel farmers in the coming years, a region that cultivates 85% of national production. Things are really very difficult,” he said.

Restaurants across Greece felt the pinch. Some tavernas took mussels off the menu in August because of short supply.

“We would hear about climate change on TV,” said Eleftherios Stouraitis, a restaurant owner in Athens. “No-one believed, no-one expected, that it would knock on our door.”

Back in the gulf, Vervitis said the government needed to urgently compensate the fishermen for their losses because there was little else they could do.

“We are forced to stay here and fight,” he said. “All our life’s efforts are here.”

US, UK, France and Germany to ask SA to hasten its green transition ahead of the UN’s COP26 talks at the end of October
National
1 month ago