Temperatures are expected to rise in several Italian cities amid heatwave, including the capital Rome on Friday 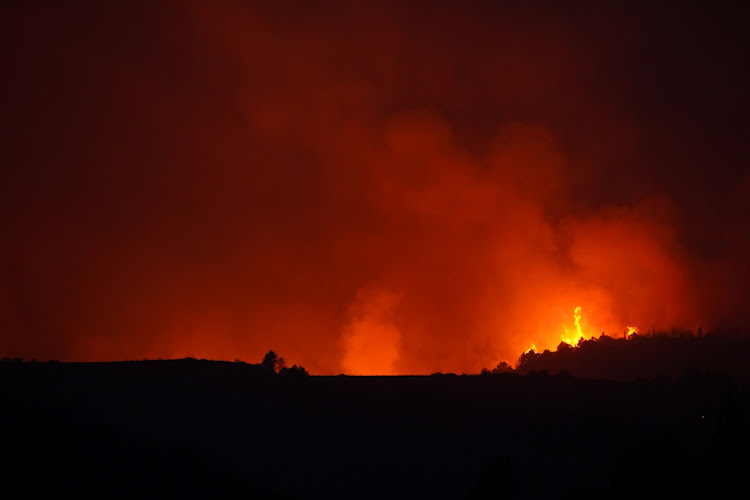 Fire in Giarratana, on the island of Sicily, Italy, August 11 2021. Picture: REUTERS/ANTONIO PARRINELLO

Rome —  Fires stoked by hot winds swept through southern Italy on Thursday, a day after a monitoring station in Sicily reported temperatures of 48.8°C, which some scientists believe could be the highest in European history.

The record temperature, which still needs to be verified by the World Meteorological Organization (WMO), was reported close to the city of Syracuse, in the southeast of the island of Sicily.

“If the data is validated, it could become the highest value ever recorded in Europe, beating the previous record of 48°C measured in Athens on July 10, 1977,” meteorologist Manuel Mazzoleni wrote on 3Bmeteo.com, a specialist website.

At the start of the week, a UN report laid bare the seriousness of global warming, which is dangerously close to exceeding the limits countries agreed were needed to prevent the most severe consequences of climate change. Wildfires and floods are already causing devastation, such as those  in Italy, Greece and Algeria.

The EU’s top diplomat called for action at this year’s Glasgow [climate] summit. “The challenge is now to make sure at the Glasgow summit that all major economies take ambitious enough, measurable and verifiable 2030 targets and climate neutrality commitments,” EU foreign policy chief Josep Borrell said in a blog post.

In Italy, firemen said on Twitter they had carried out more than 500 operations in Sicily and Calabria in the past 12 hours, employing five aircraft to try to douse the flames from above. They said the situation was now “under control” on the island.

Local media reported that trees and land were burning in the Madonie mountains about 100km from the Sicilian capital of Palermo and in the small town of Linguaglossa, on the slopes of the Etna volcano.

“Our small town was really invaded by fire. It is a catastrophe ... We are living through some really sad moments,” said Giovanna Licitra, from the village of Giarratana in the south of the island which was hit by fires on Wednesday.

Serious damage has also been reported in Calabria, the toe of Italy’s “boot”, where some families left their homes and a man died on Wednesday.

Temperatures are expected to rise in several Italian cities including the capital Rome on Friday, when the heatwave could reach its peak, according to a health ministry bulletin.

The EU and US  have  set tougher targets to reduce their emissions by 2030. US President Joe Biden has promised to put the US on a track to net-zero emissions by 2050. The 27-country EU has set that target in law.

China, India and Russia are among those facing international pressure to raise their ambition in time for the UN climate summit in Glasgow.

As a major developed economy, Borrell said the EU has a duty to lead by example.

“As one of the most economically developed areas in the world, we are among those who emit and have emitted in the past the most greenhouse gases responsible for climate change,” he said.

Forest fires have set large parts of Algeria, Turkey and Greece aflame over the past week
World
9 months ago