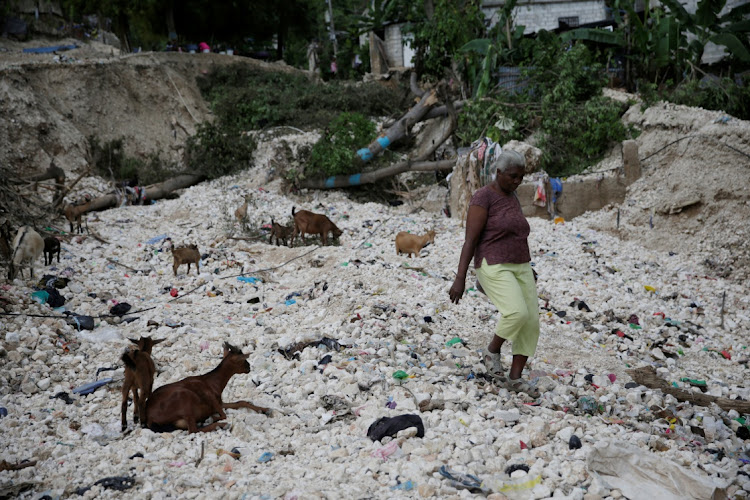 A woman walks next to fallen trees in an area affected by the passage of Tropical Storm Laura, in Port-au-Prince, Haiti August 25 2020. Picture: REUTERS/ANDRES MARTINEZ CASARES

Bogota — Haitian farmer Fritz Saint-Cyr lives in a constant state of anxiety, knowing his vegetable crops that feed seven family members can be destroyed any time as increasingly frequent and severe droughts and storms batter the Caribbean island nation.

Saint-Cyr, who lives in the southwestern department of Nippes, receives messages to warn him of potential flooding as extreme weather driven by climate change hits small-scale farmers the hardest in a country where more than half the population of 11-million relies on agriculture for food and income.

But such alerts are of little use to him.

“Early warning messages from the civil protection agency become ineffectual or even useless because we have no safe places to store our agricultural products,” said Saint-Cyr, who also grows maize and sorghum.

“I feel very vulnerable during the hurricane season,” he said. “You can lose everything — harvests, homes.”

With limited government subsidies, support or access to credit, it is up to farmers to bolster their own ability to resist climate shocks as shifting rainfall patterns wreak havoc on harvests.

“Farming families already living on a knife’s edge have very little margin for error, and may have nothing to fall back on when crops fail,” said Edryne Michel, food security and resilience manager for aid agency Mercy Corps in Nippes.

“They don’t have the tools they need to fight climate change, and at the same time they must adapt their practices to survive,” she said.

That often leaves farmers simply hoping for the best.

I’m afraid of seeing my home destroyed again, and floods taking away my animals and my farm

Timote Georges, co-founder of the Smallholder Farmers Alliance, a Haitian non-profit that promotes sustainable agriculture, said many are “powerless” in the face of hurricanes and are “constantly recovering and rebuilding from disasters”.

There is little they can do to prepare, said agronomist Georges, whose organisation supports 3,000 farming households.

“There are almost no government services provided in rural areas. There are some communities where farmers have never received a visit from the agriculture ministry,” he said.

The prospect of government help arriving soon is slim as Haiti focuses on rebuilding after last month’s 7.2-magnitude earthquake that killed about 2,200 people.

It was swiftly followed by tropical storm Grace that dumped heavy rain on the southern coast of Haiti, bringing flooding.

“The country is in chaos at the political level ... Haiti is on wait mode for sustainable development,” said Georges.

With the focus on pressing humanitarian needs, wealthy donor governments often struggle to provide longer-term aid to tackle climate change in fragile states such as Haiti, amid competing funding priorities and the risk the money may not be well-spent.

With Haiti, the US and Mexico have already experienced loss of life and destruction of homes caused by this year’s Atlantic hurricane season, which runs until November.

Haitian farmer Balland Frankel suffered big losses in a hurricane in June and worries the next one could do similar damage.

“I’m afraid of seeing my home destroyed again and floods taking away my animals and my farm,” he said.

An irrigation system, local seed-banks and drought-resistant crops would help him cope with extreme weather, he said.

In Haiti, environmentalists said the new government should craft and implement a comprehensive national plan to address climate change, stem forest loss and restore degraded land and watersheds, which would help vulnerable farmers.

It should also take into account Haiti’s varied landscape — from its fertile rice-growing valleys in the Artibonite department to deforested mountain regions and low-lying coastal zones vulnerable to storm surges and flooding, they said.

But with 4.4-million Haitians in need of food handouts, the government is not in a position to address climate change as a priority, they warned.

“Politicians have been more focused on getting power and not on getting results and taking the country out of its current state of environmental vulnerability,” Georges said.

Political stability would be needed before putting in place an effective climate action plan, he said.

Haitians emphasise that any development and environmental plans must be created with local communities and co-ordinated between the government and the international aid community.

They also hope lessons can be learnt from the 2010 quake that killed about 300,000 people and a major hurricane in 2016, when aid funds were widely perceived to have been misused.

Despite billions of dollars in aid spent over the decades, Haiti has slipped down global development rankings and rural communities remain at the mercy of weather threats.

“We will not repeat the same things that were done in 2010,” he told reporters last month. “A lot of donations were made to the country, and a lot of money was spent without seeing the impact.”

For Haitian environmental activist and doctor Dany Bien-Aime, who heads CYEN Haiti, the local chapter of the Caribbean Youth Environment Network, corruption is to blame.

“The government doesn’t care and when they do seem to care, they just take the money and nothing happens,” said Bien-Aime, adding that reforesting degraded lands should be a top priority.

Tom Cotter, who heads emergency response and preparedness at aid group Project Hope, said communities should be asked what they need and given technical expertise to implement projects.

Climate resilience initiatives need a longer-term vision and funding for three to five years, while efforts must focus on breaking the “cycle of endless emergency response”, he said.

Agricultural experts said one way to build resilience is by helping farmers switch to crops better suited to the changing climate — for example, those that can resist drought and saline soils or have varied growing maturities.

And to curb deforestation, which worsens soil erosion and flooding, alternative sources of income are needed for poor rural communities, who rely on cutting down trees for charcoal to sell and for cooking fuel, they said.

They also called for investment in removing built-up sediment along the Artibonite River to ease flooding, and in raising embankments and levees to protect coastal communities.

Whatever is done, the solutions need to be Haitian-led.

“Haiti’s sustainable development, above all, really depends on local decisions,” said Georges. “Outsiders can really help but only if there is a path and plan for that.”