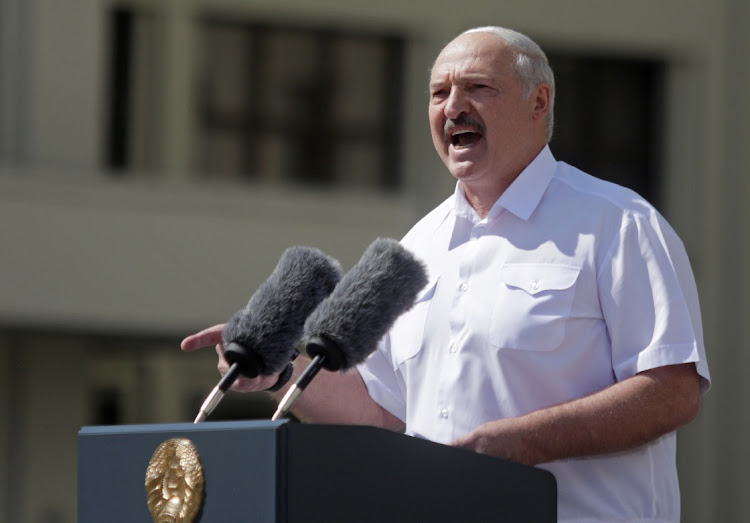 Brussels/Washington/London — Western powers hit Belarus with a wave of new sanctions on Monday in a co-ordinated response to Minsk's forced landing of a Ryanair aeroplane in May to arrest a journalist on board.

The EU, the US, Britain and Canada blacklisted more officials, legislators and ministers from the administration of President Alexander Lukashenko, whose air force intercepted the Ryanair jet flying between Athens and Vilnius on May 23 in what the West called state piracy.

“We are united in our deep concern regarding the Lukashenko regime’s continuing attacks on human rights, fundamental freedoms, and international law,” the EU, the US, Britain and Canada said in a joint statement.

“We are united in calling for the regime to end its repressive practices against its own people,” they said.

In Monday's mix of travel bans, asset freezes and sanctions on state-owned Belarusian companies, Western governments sought to escalate their pressure on Lukashenko, who is accused of rigging elections last August and cracking down on the opposition to prolong his now 27 years in power.

There was no immediate reaction from Lukashenko who has denied rigging the vote, accused the arrested journalist Roman Protasevich of plotting a revolution, and turned to Russia for support.

The EU included Russian businessman Mikhail Gutseriyev, the largest single foreign investor in Belarus, in its sanctions. That is likely to further strain Brussels’ ties with Moscow, which accuses Europe of interfering in its affairs.

The latest round of sanctions since 2020’s disputed elections takes the EU’s tally of Belarusian legislators, officials, judges and military commanders to 166 people, including 78 who were blacklisted on Monday.

Britain, the US and Canada added individuals to their sanctions lists, though it was not immediately clear if those now blacklisted in Belarus are all subject to the same travel bans and asset freezes across all countries.

The EU targeted defence minister Viktor Khrenin, the transport minister and the air force commander, as well as judges, legislators and officials.

US President Joe Biden, along with other Western leaders, had condemned the forced landing of the Ryanair flight and instructed his advisers to hold those responsible to account.

British foreign secretary Dominic Raab accused Lukashenko of a “shameful ruse” to arrest Protasevich, 26, on the Ryanair flight, as well as his student girlfriend.

Family members say they have been coerced into confessions about organising protests in Minsk in 2020.

Belarusian opposition figure Sviatlana Tsikhanouskaya met EU foreign ministers for t talks in Luxembourg on Monday, before addressing reporters in Brussels. She called for more Western efforts to punish Lukashenko and press him to agree to free and fair elections.

“Lukashenko is escalating his violence towards people who are fighting against him, but people are not giving up,” she said. EU leaders would discuss giving political approval at a summit on Thursday.

While individual sanctions have not had the impact the West has sought, the EU hopes that economic sanctions in the pipeline will hit Lukashenko the hardest.

EU leaders are set on Thursday to consider provisionally agreed sanctions on oil, finance, potash and tobacco, which were approved by EU officials late last week.

Restrictions on the Belarusian financial sector are set to include a ban on new loans, a ban on EU investors from buying bonds on the primary market and a ban on EU banks from providing investment services.

EU export credits will also end, though private savings will not be targeted. Securities in circulation and traded between fund managers are not expected to be included, but sanctions on the secondary market could come later.

The bloc will ban exports to Belarus of any communications equipment that could be used for spying, and tighten an arms embargo to include rifles used by biathletes, officials said.

“Our demand to Lukashenko remains the same: the release of political prisoners, an end to the violence against protesters and the opposition and an inclusive dialogue leading to free and fair elections,” German foreign minister Heiko Maas said.

Lithuanian Prime Minister Ingrida Simonyte said her government was ready to support its enterprises if they were targeted by the European sanctions on neighbouring Belarus.

Detained journalist Roman Protasevich tearfully confessed to his role in anti-government protests, but the opposition believes he was coerced
World
1 year ago