As Covid-19-related deaths in Poland surpass 800 a day, epidemiologists have pointed to a major medical personnel shortage as one of the culprits 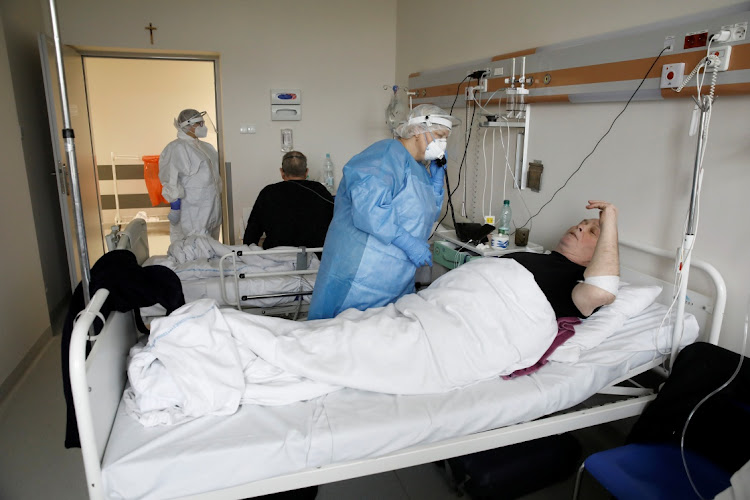 Krakow — When the pandemic began in 2020, Kinga Szlachcic-Wyroba, an anaesthesiologist in the Stefan Zeromski Specialist Hospital in Krakow, Poland, had to manage one Covid-19 patient and 10 others in intensive care with three other doctors.

Szlachcic-Wyroba, however, is still working with only three other doctors.

"We are physically doing our best but we are frequently unable to secure the care that we would like to provide," she said in the ward's break room for staff, lined with couches and a stray sleeping bag, adding that when on shift they often can't even take a break to sit down.

As Covid-19-related deaths in Poland surpass 800 a day and the country hits a European record for excess deaths, epidemiologists have pointed to a major medical personnel shortage as one of the culprits.

Szlachcic-Wyroba is exhausted from 24-hour shifts and comforting patients' families, adding that the flood of critically ill patients in recent weeks surpassed "even my worst dreams".

Across Poland, doctors have complained about long lines of ambulances at hospitals or rescheduled non-Covid-19 surgeries for life-threatening illnesses.

"The country was unprepared for this scale of an epidemic... There are no beds, no personnel, simply no reserves," said professor Krzysztof Simon, a regional epidemiology consultant from Lower Silesia.

According to Eurostat, Poland had only 2.4 doctors and 5.1 nurses per 1,000 citizens in 2017, among the lowest in the EU, even before the pandemic.

Many doctors have gone abroad in search of better pay, with health spending not enough to attract or retain staff.

"The healthcare system is now at its limit but it has been at this limit basically for as long as I can remember. The epidemic has just multiplied all of its shortcomings," said Piotr Meryk, head doctor at the Zeromski hospital's Covid-19 ward.

That means deaths have spiked this year, doctors say, as Covid-19 patients are reluctant to go to hospital, fearing poor conditions and patients suffering from other serious illnesses are neglected by specialists relocated to Covid-19 wards.

After Brazil, Poland had the second highest cumulative number of confirmed deaths in the world the week of April 13, according to Our World in Data.

The government has promised to address the issue, but staff are hard to find despite efforts to recruit medical students and Ukrainian doctors.

"You can buy equipment, build temporary hospitals, produce more beds, but personnel is the element that is creating a bottleneck," health minister Adam Niedzielski said in February.

In a statement to Reuters, the ministry said it had taken legislative steps in recent years to recruit more nurses and doctors.

But as patients flood wards, Meryk said these steps were not enough, and he urged the government to prepare for future pandemics.

"You can't just make these doctors appear or clone them."

Reading out e-mails from some threatening to leave a party; sarcasm; accusations of flip-flopping — German politics is not holding back
World
3 weeks ago