Reading out e-mails from some threatening to leave a party; sarcasm; accusations of flip-flopping — German politics is not holding back 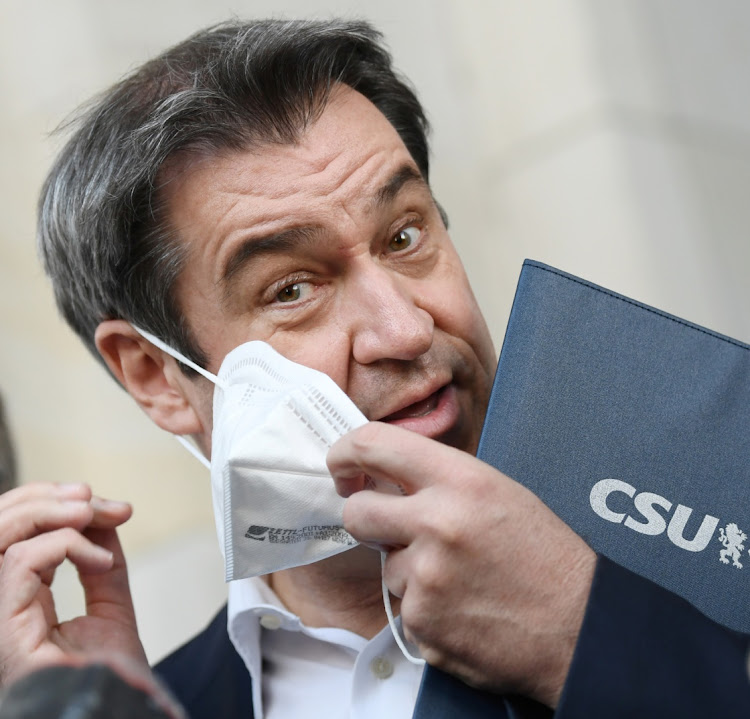 Berlin — Bavaria premier Markus Söder presented himself as a force for change who can revive the fortunes of Germany’s conservatives as he stepped up his bid to follow Chancellor Angela Merkel at the top of the bloc’s election ticket.

His rival for the candidacy in September’s national vote, Armin Laschet, responded by saying that Söder changes his views a little too easily, accusing him of opportunism and lacking principle, according to officials present at a private meeting Tuesday with lawmakers.

The battle to claim the mantle of Merkel’s successor is going down to the wire with the two contenders exchanging increasingly barbed attacks that have alarmed senior officials in their alliance. Both said the matter must be settled by Friday.

Merkel’s Christian Democratic Union (CDU) and its Bavarian sister party led by Söder have seen their poll numbers tumble amid mounting concern over the government’s handling of the coronavirus pandemic. Merkel is worried that the spectacle of a public brawl between the bloc’s two leading figures will do further damage to its standing, according to a person familiar with her thinking.

Johann Wadephul, a deputy leader of the CDU-CSU parliamentary group, said Tuesday’s four-hour caucus meeting went Söder’s way, with many lawmakers from both parties citing support for him in their constituencies across Germany.

“There were a lot of members of my political group supporting Markus Söder,” Wadephul said on Wednesday in an interview with Bloomberg TV. “This is what they heard in their constituencies and this is what I heard in my constituency.”

After initially balking at the prospect of a direct clash, Laschet, the leader of the much larger CDU, was goaded into joining Tuesday’s meeting after Söder vowed to make his pitch directly. On Wednesday night, Söder will appear on a popular German talk show, highlighting his potential appeal to voters.

Polls have consistently showed that he would comfortably defeat his main rivals if there were a direct vote for chancellor, while Laschet would lose.

Of 2,500 people surveyed in a Forsa poll for broadcaster RTL published on Wednesday, 39% said they would pick Söder. That’s about double the result for Greens’ co-leaders Robert Habeck and Annalena Baerbock and compares with 14% for Social Democrat candidate Olaf Scholz. In a similar vote, Laschet would score only 16% and come in third.

Still, the CDU chair has precedent on his side — the Munich-based CSU has never elected a chancellor and the CDU almost always provides the bloc’s candidate — as well as the organisational muscle of his party hierarchy. But he’s failed to strike a chord with voters.

“We need unity quickly,” Laschet said as he left Tuesday’s meeting. “This was a good discussion that we will have to factor into our decision.”

Söder is betting that CDU lawmakers worried about losing their seats can be persuaded to back his claim and several spoke out to support him. One said that members in his district have indicated they won’t campaign for Laschet and read out e-mails from some who threatened to leave the party, officials said.

Söder also came in for criticism, with one CDU lawmaker saying he has no backbone and attacking him for flip-flopping.

In his speech to the caucus, Söder argued that the CDU-CSU can’t afford to ignore the polling numbers that are projecting the worst federal election result in their history and “business as usual” will no longer work, officials present said. He pitched himself as a candidate who can connect with a new generation of voters via television and social media.

Laschet pointed to Söder’s track record of imitating the anti-immigration stance of the Alternative for Germany before switching to attack the nationalists when it was politically expedient, sarcastically congratulating his opponent for the U-turn.

“You have really done a good job there,” Laschet said, according to one of the officials.

Hungary in war of words over German club’s LGBT stance

The government has spent more than €130bn so far to support the economy, with Italy in and out of Covid-19 lockdowns for more than a year
World
1 year ago
Next Article