Panic shopping, backed up trucks carrying perishable foods, a rampant new strain of the coronavirus — the UK is under siege 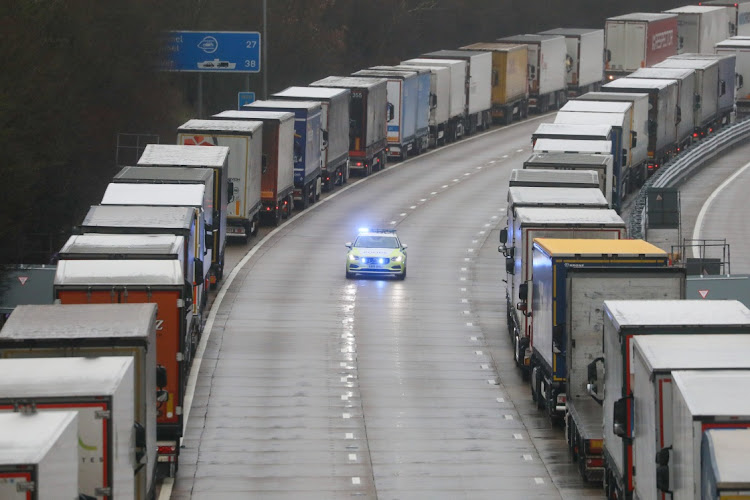 The UK is confronting threats of food insecurity and panicked shopping days before Christmas as European nations restrict trade and travel to guard against a resurgent coronavirus, offering Britain a preview of the border chaos to come in the absence of a Brexit deal.

Fearing a fast-spreading new strain of the virus that forced a strict lockdown across England, on Sunday, France suspended travel from the UK for 48 hours and Germany halted arriving flights from Britain. The crisis gives renewed urgency to negotiations for a trade deal with the EU that remains at a critical stage after weekend talks. The French government will want a stricter testing regime before lifting the blockade.

Late on Sunday, the UK Port of Dover halted freight moved by truck into France while allowing unaccompanied cargo to keep moving. Though traffic into the UK is unaffected, truckers often run supplies in both directions and the latest outbreak in the heart of the country may discourage them from entering the island.

“This is the nightmare before Christmas,” said James Withers, CEO at the Scotland Food & Drink industry group.

He said there are more than 100 trucks laden with seafood due to cross the border into the EU, bound for Christmas wholesale markets in France and Spain that would normally be held on Wednesday. Fears are growing that live shellfish will spoil if they’re held up at the border, and the government needs to act today to ensure that the freight can keep moving, Withers said.

French transport minister Jean-Baptiste Djebbari said European nations are working on “a solid health protocol” to be implemented “in the coming hours”. Container ports and ferry terminals were already congested because of stockpiling ahead of the December 31 deadline marking a final break from the European single market.

But a meeting of the EU’s crisis response experts in Brussels on Monday ended without reaching a decision on how to proceed regarding UK travel, according to an EU official, who spoke on condition of an anonymity. Some members of the group called for an urgent discussion at political level to resolve the issue, the official said.

In the UK, officials sought to downplay the urgency of the situation. Jamie Davies, the prime minister’s spokesperson, urged Britons not to panic-buy groceries and said, “We have resilient supply chains and it is the case that the majority of our food doesn’t come in through the short straits.”

Asked about the vaccine, Davies also said the UK already has “the majority of this year’s supply” from Pfizer.

The border chaos comes at the tail end of a year that’s seen Johnson nearly die from the virus and come under heavy criticism over his response to the pandemic, which left the UK with a death toll second only to Italy in Europe and the worst hit to output of any major economy.

Outside Dover, trucks began lining up on the M20 motorway as the “Operation Stack” emergency plan was triggered with drivers unable to board ferries. The UK department for transport was also preparing Manston airport in Kent, which is being overhauled to accommodate as many as 4,000 vehicles as part of Britain’s no-deal planning, according to the local government’s website.

“There could be a period of disruption at some of the UK’s ferry ports for the next 48 hours,” said Richard Ballantyne, CEO of the British Ports Association. “We are confident that the UK will continue to be supplied.”

UK travel, leisure and retail shares slumped on Monday as flights were cancelled, while stay-at-home stocks, such as Ocado Group, got a boost. Airlines were among the worst hit, with British Airways (BA) parent IAG falling as much as 20% and easyJet down as much as 18%.

Economists at Berenberg cut their 2021 growth forecast for the UK just last week to 7.3% from 8% because of new lockdowns. The economic drag of tougher restrictions and trade turmoil will only deepen the hole the country is in, unleashing more damage stretching from mom-and-pop retailers to already struggling European airlines.

Then there is the political fallout. Johnson abruptly cancelled plans to allow families to mix over the holiday period as the government warned over the weekend that the new strain of the virus is “out of control”.

There were scenes of panic at train stations, with people defying social-distancing rules to get out of the capital.

More than 16-million Britons are now required to stay at home, mainly in London and southeast England. The measures ban household mixing in the capital and the southeast, and allow households to see each other just on Christmas Day across the rest of England.

PM Boris Johnson says there’s no evidence yet that the variant is more lethal, but it may be as much as 70% more transmissible
World
11 months ago
Next Article