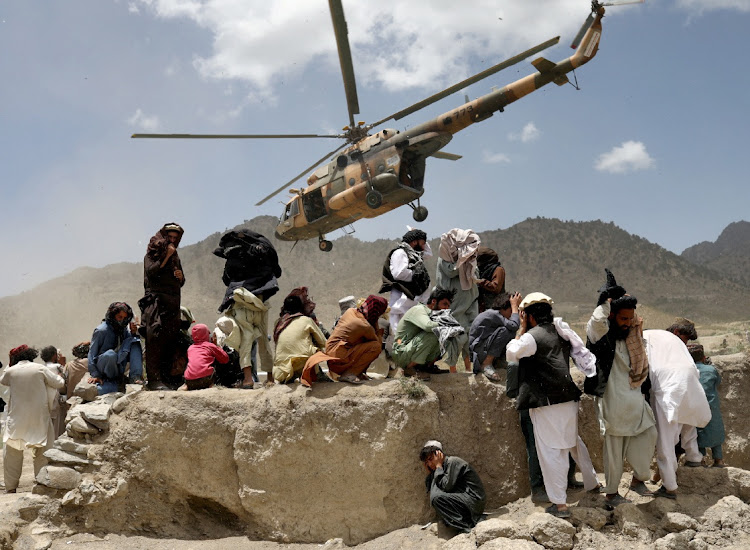 A Taliban helicopter takes off after bringing aid to the site of an earthquake in Gayan, Afghanistan, June 23 2022. Picture: REUTERS/ALI KHARA

Kabul — A large Taliban-organised gathering of Afghanistan’s religious scholars and tribal elders will address issues of national unity and will be without female participants, the acting deputy prime minister said on Wednesday.

Abdul Salam Hanafi told state broadcaster RTA that the gathering, the first of its kind since the Taliban took over last August, would start on Thursday.

“Different people with different views are going to gather ... this will be a positive step for stability in Afghanistan and strengthening national unity,” he said, adding that religious leaders had asked for the gathering to address an Islamic system of government, economic and social issues.

Afghanistan is in deep economic crisis as billions in central bank reserves have been frozen and international sanctions enforced on the banking sector after the Taliban took control have severely hampered the economy.

When asked if women would attend Hanafi said male delegates would represent women. “The women are our mothers, sisters, we respect them a lot, when their sons are in the gathering it means they are also involved, in a way, in the gathering,” he said.

Civil society groups have said the meeting will lack legitimacy if women are not included.

The gathering appeared similar to a “loya jirga”, a traditional form of decision making in Afghanistan that some leaders, including former republic president Ashraf Ghani have used. Ghani in 2020 convened a loya jirga before deciding to release hundreds of Taliban prisoners to advance peace talks.

It was not clear exactly what would be discussed at the gathering of 3,000 men and whether the issue of girls’ secondary education would be addressed.

International governments, particularly Washington, have said the Taliban needs to change course on women’s rights after reversing its decision to open girls’ high schools in March and requiring women to cover their faces and have a male chaperone while travelling.

Foreign states have called for an inclusive Afghan government. Key ministerial roles are held by Taliban members in an acting basis and the group has ruled out elections.

The White House has said it is trying to find solutions for the banking sector which benefit the Afghan people and not the Taliban. The Taliban’s acting foreign minister Amir Khan Muttaqi flew to Doha on Wednesday for talks with US representatives on the banking sector, the administration said in a statement.

BIG READ: The US Supreme Court decision on abortion is not about the right to life

The deliberately polarised debate is not about human rights at all: it is about politics, state power and control, writes Kristina Bentley
Life
1 month ago

The magnitude 6.1 earthquake struck early on Wednesday in mountains with small settlements near the border with Pakistan
World
1 month ago
Next Article